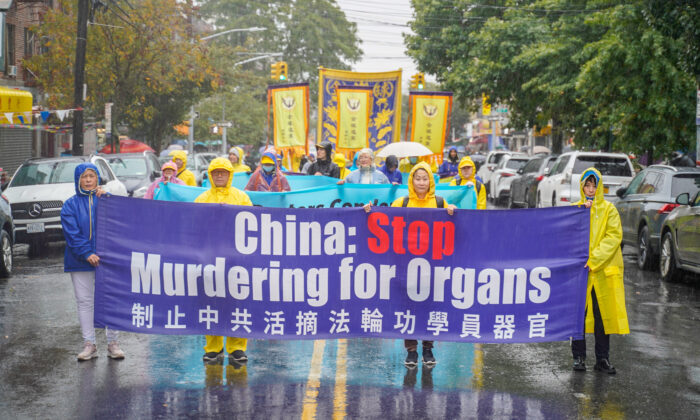 Falun Gong practitioners attend a parade in Brooklyn, New York City, on Oct. 2, 2022, to call an end to the Chinese regime's persecution. (Zhang Jingchu/The Epoch Times)
By Cathy He

NEW YORK—Heavy rain and cold winds failed to deter hundreds of Falun Gong practitioners from parading through Chinatown in the Brooklyn borough of New York on Oct. 2 to call for an end to the Chinese Communist Party’s (CCP) 23-year persecution of the spiritual group.

The rain-drenched participants, many of whom wore yellow rain jackets, toted banners and signs urging people to distance themselves from the myriad abuses committed by the communist regime, and to support the more than 400 million individuals who have severed ties with the CCP.

The wind and rain, however, were nothing compared to what adherents have experienced in China, according to organizer Yi Rong, a representative of the Falun Dafa Association in New York.

“In mainland China, there’s no way that practitioners can hold a parade [like this],” Yi told The Epoch Times. “If you do the Falun Gong exercises, you will be arrested and sentenced, and even lose your life.”

An untold number of Falun Gong adherents have died from torture or forced organ harvesting while detained in prisons, labor camps, detention centers, and brainwashing centers across China under the CCP’s campaign to suppress the faith group.

Falun Gong, also known as Falun Dafa, includes meditative exercises and a set of moral teachings based on the principles of truthfulness, compassion, and tolerance. It found itself the target of repression by the regime in Beijing after the group surged in popularity, with an estimated 70 million to 100 million people practicing by 1999. The Party deemed such numbers of people following spiritual principles to be a threat to the regime’s autocratic control.

One parade participant, He Aishan, who recently arrived in the United States from the central Chinese province of Hubei, relayed her own experiences of persecution.

“It might be very hard for someone from a free society to imagine this: that in China from 1999, a good person who has done nothing wrong and simply believes in Falun Gong and ‘truthfulness, compassion, and tolerance’ will suffer vicious persecution from the CCP,” she told The Epoch Times.

He Aishan started practicing Falun Gong while in high school, and found that the practice immediately helped with her studies and health. But after 1999, everything changed. Her mother, also a practitioner, was sent to labor camps twice, and detained and sent to brainwashing facilities multiple times, He said.

When He was in college, the university referred her to detention at a labor camp, where she was psychologically tormented through brainwashing.

Ahead of a major party meeting in 2012, He’s family was targeted again as authorities stepped up their persecution of Falun Gong, seeking to round up known adherents.  She was followed by police and her phone was tapped.

The police ransacked He’s home and arrested her mother again. She wasn’t at home at the time and avoided that fate. However, when her father returned to find the apartment turned upside down, he collapsed, suffered a stroke, and later died.

“In my family, we have been left ruined and broken from the CCP’s persecution,” she said.

Passerby Liu Aling was impressed by the Falun Gong practitioners who braved the remnants of Hurricane Ian to participate. Having grown up in mainland China, she said it was difficult for people there to get uncensored information about the spiritual practice hated by the regime.

“In China, the websites only give you good news. They censor all the bad news,” Liu told The Epoch Times.

On the internet, television, and print, the only information about Falun Gong is CCP propaganda that vilifies the practice, aiming to stir up mass hatred toward the group. Any information about the persecution is heavily censored on the CCP-controlled internet.

So Liu didn’t believe what was happening in China.

It wasn’t until she came to the United States, where she was able to access uncensored news sources and websites, that she slowly came to understand the reality of the persecution of Falun Gong.

She also quit the Party not long after coming to New York, noting that she—like virtually all other mainland Chinese—had joined the CCP’s Young Pioneers while in elementary school.

There are now more than 400 million Chinese who have renounced their ties to the CCP or its affiliates.

Liu hopes that more Chinese people in the United States can use the country’s freedoms to learn about the situation in China. For those in her home country, she hopes that they can be given more freedoms and the liberty to practice whatever faith they choose.

“I hope this kind of persecution can come to an end,” she said.