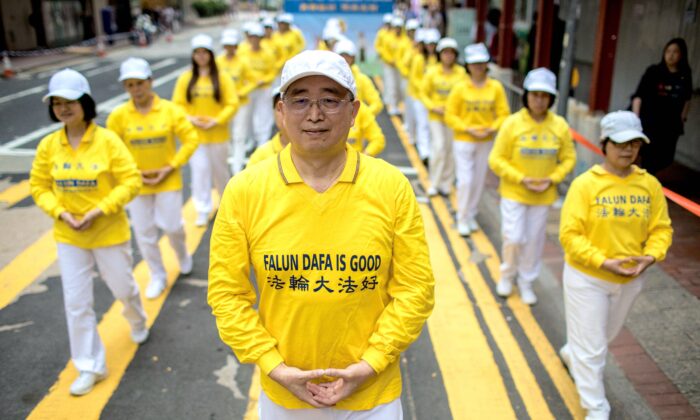 Several pro-Beijing lawmakers in Hong Kong took aim at the spiritual practice Falun Gong on July 3, urging the government to ban the discipline under the city’s controversial national security law.

Their call was met with condemnation by the city’s Falun Dafa Association, which called it an attempt to extend the Chinese regime’s decades-long persecution of the practice outside the mainland.

It comes as freedoms in the financial hub have seen a dramatic fall in the aftermath of Beijing’s imposition of a draconian national security law last summer. Since then, the law, which criminalizes acts deemed by the Chinese regime as subversion, secession, terrorist activities, or collusion with foreign forces, has been used to decimate the city’s pro-democracy forces. Dozens of prominent figures critical of Beijing have been charged or jailed under the law or similar offenses.

Falun Gong, also known as Falun Dafa, involves meditative exercises and a set of moral teachings based on the principles of truthfulness, compassion, and tolerance. The discipline has been systematically suppressed by the Chinese Communist Party (CCP) for 22 years in mainland China, but not in Hong Kong. Since 1999, millions of adherents have been detained or imprisoned, where they suffer torture, abuse, and even forced organ harvesting.

Lawmakers in the United States, the European Union, and elsewhere have adopted resolutions condemning the persecution. Most recently in June, Texas officially adopted a resolution to curb the regime’s forced organ harvesting of Falun Gong practitioners, describing it as “murder.”

During a Legislative Council session on July 7, pro-Beijing Hong Kong politician Elizabeth Quat claimed that the spiritual group was involved in spreading “subversive opinions” through its public activities in the city and called on authorities to ban the practice.

Falun Gong practitioners in Hong Kong, as well as many other cities around the world, can often be seen distributing materials to passers-by in a bid to raise awareness about the CCP’s persecution and human rights abuses and to elicit public support for an end to the suppression.

Another pro-Beijing politician, Wong Kwok-kin, asked the government to investigate the source of Falun Gong’s funding and freeze its assets if necessary.

In response to these questions, Hong Kong Security Secretary Chris Tang said authorities would probe the matter, without going into specifics.

“Whether Falun Gong has violated the Hong Kong national security law, there are numerous accusations in the society. The law enforcement agencies will definitely look at them closely. These allegations could possibly lead to certain legal proceedings. So I shall not comment publicly on an individual organization,” Tang said.

“Any acts that may endanger national security and any such organization engaging in such acts would face the full force of the law, including rigorous investigation, gathering of evidence, and if need be, enforcement action will be taken.”

The city’s Falun Dafa Association denounced the campaign mounted by the pro-Beijing lawmakers.

Sarah Liang, spokeswoman for the association, said that for more than 20 years, local practitioners have used nonviolent and peaceful ways to expose Beijing’s persecution.

She dismissed accusations of illegal fundraising activities, saying that Falun Gong practitioners act as volunteers, and adding that all of the practice’s books are available to download for free online.

The Falun Dafa Association is also legally registered in the city, and adherents are protected by Hong Kong’s mini-constitution, which guarantees freedom of belief, she said.

Also during the Legislative Council session, several pro-Beijing politicians including Quat, without any evidence, sought to tie a recent “lone wolf” attack on a police officer to the local Falun Gong organization.

On July 1, a 50-year-old Hong Kong man stabbed a policeman in the back and then stabbed himself in the chest with a knife. The attacker was sent to the hospital but died about an hour later. The policeman received surgery to repair a punctured lung at the hospital.

The assailant, Leung Kin-Fai, a purchasing director at local beverage company Vitasoy, has not been identified by police or others as affiliated with Falun Gong.

The CCP “often uses very nonsensical ways to distort and slander Falun Gong,” she said, adding that the falsity of the claims was self-evident.

The actions of the pro-Beijing lawmakers were the first step in a premeditated pressure campaign targeting Falun Gong, according to Feng Chongyi, an associate professor in China Studies at the University of Technology in Sydney.

“Everything might appear to be done in accordance with the law,” Feng told The Epoch Times. “But beneath it was a step-by-step plan to make Falun Gong disappear in Hong Kong. This is obvious.”

For an official to openly target a religious group without sufficient evidence reveals “a high degree of bias” and is a cause for alarm, said Tseng Chien-yuan, a professor at the National Central University in Taiwan and board member at the nonprofit group New School for Democracy.

“It raises questions of whether you would go so far as to fabricate crimes to accuse this group to make you sound consistent,” Tseng told The Epoch Times.

Falun Gong practitioners in Hong Kong have long been targeted by local groups backed by the Chinese regime.

The CCP began its harassment of practitioners in the city around 2011 through its front group called the Hong Kong Youth Care Association (HKYCA). Since then, members of the group have repeatedly vandalized roadside information booths set up by practitioners or harassed individuals manning these booths.

When practitioners held rallies and marches to raise awareness of the continued persecution in China, HKYCA members would gather in nearby locations trying to disrupt these public events. In January 2016, an HKYCA member was spotted at a local hotel where a Falun Gong conference was to be held, after which the event was canceled due to a hoax bomb scare.

Practitioners have also been assaulted by HKYCA members or people associated with other pro-Beijing groups in Hong Kong.

Roadside information booths have continued to be targeted this year, despite the fact that the HKYCA was reportedly disbanded at the end of 2020.

Since the security law took effect last July, Falun Gong practitioners in the city have expressed concern that it would be used to extinguish freedom of belief. Some worry about their personal safety, while others fear they could be subjected to torture or forced organ harvesting, as mainland practitioners are.

The devolving political climate in Hong Kong has troubled Liang, who cited the recent forced closure of the city’s largest pro-democracy newspaper and the ongoing clampdown on pro-democracy groups.

“In fact, how much freedom is left in Hong Kong?” she said.

Luo Ya and Eva Fu contributed to this report.