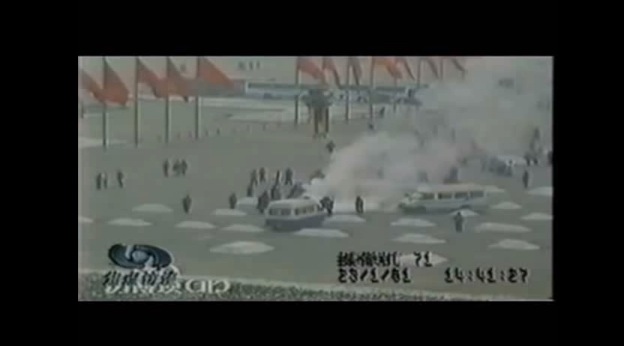 In 2001, the CCP staged a clumsy "self immolation" drama in Tiananmen in an attempt to turn public opinion against the peaceful practice of Falun Gong. ( A screenshot of the video "False Fire,")
China

False and fiery propaganda persists in China, a 13-year retrospective
By Matthew Robertson

Fast forward 30 years. It’s Jan. 31, 2001, a week after Chinese New Year’s Eve, the biggest occasion in the country. Families are still together, everyone is at home, and after dinner many tune in to the national broadcaster, China Central Television (CCTV), to watch the investigative news program “Focus.” On this day, in fact, flyers had been distributed around residential buildings urging people to tune in.

Interviews with people in China and foreign press reports at the time indicate the impact of the one-way media bombardment. Martin Regg Cohn wrote for the Toronto Star: “The fervor of the campaign suggests the Communist Party remains paranoid about the challenge to its authority. … Despite its stage-managed air—a throwback to the shrill tactics of the 1966-1976 Cultural Revolution—the renewed government crusade seems to have struck a chord with ordinary Chinese.”

It had a powerful impact. The Epoch Times interviewed a range of people who were in China in 2001: a Tsinghua University professor, a boat captain from Liaoning Province, a mine worker from the Northeast, and a kindergarten teacher from Anhui Province. They had roughly the same story to tell. People went from sympathizing with Falun Gong before the propaganda campaign to despising it: from being often baffled by the persecution to either accepting it or even being willing to join in.

“If you’re looking from the outside you can see all the problems in the story,” says Helen Nie, 41, now in Illinois. “But in that environment, you’re trapped, you’re taken in by the plot. It’s very convincing: the people involved are old, young, a kid, a university student, I didn’t think about the suspicious points. I believed it, and I was extremely angry.” At that time she had practiced Falun Gong for several years; she says she can imagine the feelings of people who lacked that background.

The lies that state media initially came up with against Falun Gong, starting from July 20, 1999, when the persecution began were “extremely childish,” Ms. Nie says. Many members of the public dismissed news reports that wrote, for example, Falun Gong practitioners would cut their stomachs open or spontaneously go insane—but they were presented with a more complex narrative in 2001, and compelling imagery to boot.

Liu Hongchang, a miner and Falun Gong practitioner who was in Beijing at the time and now lives in Holland, was arrested on Feb. 9, just a week after the footage was aired. Propaganda was still being broadcast, even in the prisons. Inmates and guards were vicious, he said: “Look, you think practicing Falun Gong is good? Look at them!” A Chinese boat captain who was in Japan at the time said the news was being spread there, too.

Sun Yanjun believes there were several reasons the propaganda was believed: “The images were terrifying, which had an impact on people. People had a habit of watching CCTV news; they didn’t analyze it and didn’t understand how the CCP was controlling everything they saw.

“Also, for more than a year, the CCP propaganda had been telling people that Falun Gong practitioners were not normal and did not value human life. This had an impact and prepared the way for the immolation hoax.”

Alongside social animus came an increase in the brutality quotient. The Washington Post reported in August 2001 that the immolation was a “turning point” in the CCP’s campaign, and “freed the party’s hand” to use extreme violence against staunch believers.

“The immolations had a huge effect,” an insider told Post reporters. “Previously, most Chinese thought the crackdown was stupid, like a dog catching a mouse. After those people burned themselves and the Party broadcast that little girl’s face on TV for almost a month straight, people’s views here changed.”

James Ouyang was victim to the violence in the wake of the propaganda, the Post reported. Captured by police, he was “methodically reduced … to an ‘obedient thing’ over 10 days of torture.” He was made to stand against a wall and received high-voltage electric shocks if he moved.

Torture deaths also leapt up after the immolation propaganda. According to the Falun Dafa Information Center, in 1999 there were 67 torture deaths, in 2000 there were 245, but in 2001 they jumped to 419. That number—representing those who can be confirmed by name, date of death, and circumstances, and is a probably just a fraction of the total—remained at around 400-500 from then on.

An oddity not often commented on in reports of the propaganda surrounding the incident is the divergence between the domestic and the international messaging: to Western journalists the event is marketed as a protest action by desperate Falun Gong practitioners. But to the domestic Chinese audience it is couched as a matter of Falun Gong doctrine that immolation is a means of “entering Heaven.”

Perhaps seeking once more to revive the persecution of Falun Gong, official state media Xinhua published an update on the alleged victims of the immolation on Jan. 21, pre-empting the 10-year anniversary on Jan. 23. It was republished in over a dozen newspapers and also translated into English. No pictures accompanied the report this time, and the CCP propagandists changed one significant fact from their earlier version of the story: In 2001 only one person “burned to death on the spot” on Jan. 23; in 2011, suddenly there were two.