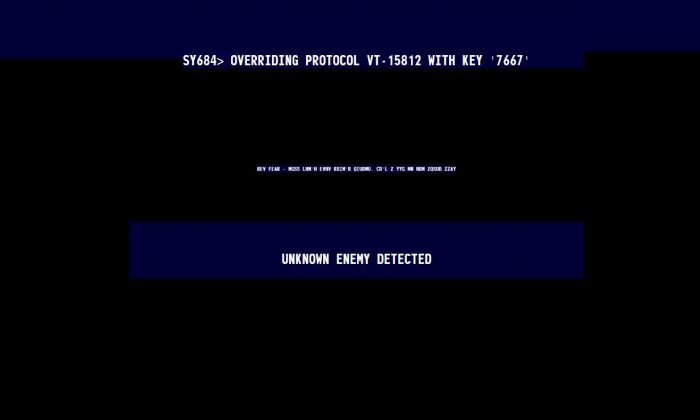 A screenshot shows the cursor-highlighted hidden website in the Survivor 2299 domain.
Tech

Fallout 4 speculation is heating up even more after another section of the Survivor 2299 viral site was discovered this week.

A hidden page on the website was discovered and has a slightly different format and text.

It also has garbled, coded text like the other Survivor page that can only be viewed if one highlights it.

Inc Gamers posted that the message translates to “THEY DON’T KNOW WHAT’S COMING. IT’S A KEY TO THE GREAT GAME.” This could be in reference to NPC Desmond Lockheart’s phrase about a “great game” in Fallout 3.

The new website doesn’t include the constant beeping morse in the background.

The Fallout sub-Reddit has been credited with finding the hidden website. Users in the sub-Reddit also tried to translate recent morse code left on the site called “Broken Harvard Bridge.”

Over the weekend, the main Survivor 2299 page also issued an update.

In the Fallout sub-Reddit, users deciphered the message to say: “THE INSTITUTE IS SEALED. THEY WON’T HELP US I’M HEADING TO BLACK ROW. -TBNLS 5120-”

The “Institute” may be in reference to something that was mentioned in the Fallout 3 games. Fallout 3 NPC Dr. Zimmer makes mention of it, according to the Escapist, but there isn’t much context.

The Overseer refers to the Vault Overseer characters that have been present throughout the Fallout series.

Neither Bethesda or ZeniMax have commented on the Survivor 2299 website and there’s been no mention of a Fallout 4 in the works.

The Survivor 2299 website has apparently been registered by ZeniMax, but it’s not clear.

There has bas been speculation that the whole thing is a viral hoax.