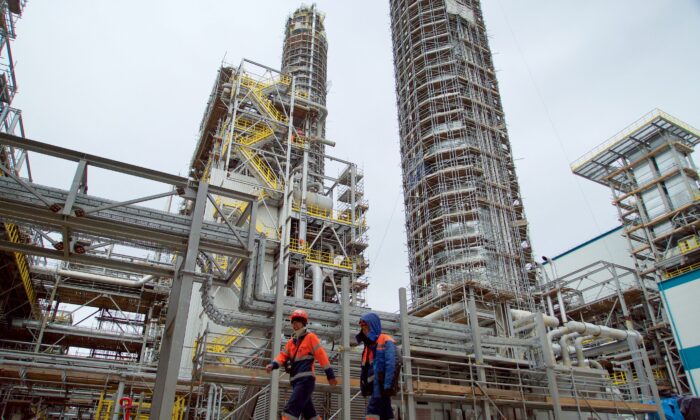 The construction site of Russia's petrochemical holding Sibur's ZapSibNefteKhim plant on the outskirts of Tobolsk on Oct. 4, 2018. (Andrey Borodulin/AFP via Getty Images)
Viewpoints

It’s tempting to laugh at Biden’s climate czar and devoted private jet customer John Kerry who complained to BBC Arabic that the Ukraine War could “distract the world from the climate change crisis and produce ‘massive emissions’ that will negatively impact the globe.”

Only it’s actually tragic—and not for the environment.

The truth is that people like Kerry and many of his colleagues and predecessors who have been obsessed with the same supposedly imminent ecological disaster literally for decades now, are to blame as much as anyone—with the exception of Vladimir Putin, of course—for the carnage in Ukraine.

This environmental obsession obviously swept up our current president to such a degree that from the minute he was inaugurated he worked to reverse the American energy independence achieved under the Trump administration.

He succeeded and then some in less than a year.

Result: The United States imports oil to the tune of millions of dollars a day, including from Russia (even as it invades Ukraine). As Bloomberg reported last year, Russia provides more oil to the United States than any other country, except Canada. Around 20 million barrels per month.

This makes the so-called sanctions a pathetic sideshow—laughable, really.

As for most environmentalists, they are mostly moral narcissists signaling their own virtue. Few actually do much for their sainted environment other than buy a Tesla if they can afford one.

Nevertheless, as Bjorn Lomborg wrote in the Financial Post: “If the whole world follows through and gets to 140 million electric cars by 2030, the IEA [International Energy Agency] estimates that will reduce emissions by just 190 million tonnes of CO₂—a mere 0.4 percent of global emissions. In the words of Fatih Birol, head of IEA, ‘If you think you can save the climate with electric cars, you’re completely wrong.’”

In reality, barring some miraculous discovery, the whole world will be running on gas and oil for years to come, unless the environmentalists let us use the more efficient nuclear.

That oil—purchased by America, Germany, and many others—is fueling Russia’s attempt to reconstruct the old Soviet Union. Biden highlighted that in his speech, but he is greatly to blame.

He could have announced he was turning on the American energy spigots again, but he didn’t.

As I write this, the stock market is up as it has been, somewhat surprisingly, in the midst of this invasion.

Those in the know explain this as traders assuming the Federal Reserve will now have to restrain itself from raising rates. And there may be truth in that.

But I have another theory: The traders are looking at the sanctions agreed to by NATO members, including the United States, and see them as weak and pointless. They take that as a signal that business as usual will not be interrupted. Russia will go on selling tons of oil to the United States and the rest of the world.