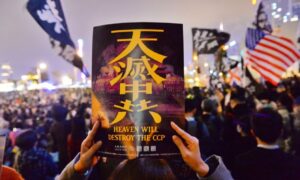 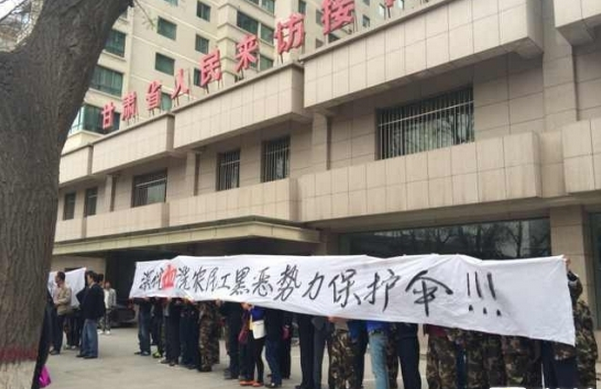 Workers protest in front of the local government reception building against evil forces, after 300 people pretending to be police smashed a construction site and injured more than 70 workers on April 7 in Lanzhou of Gansu Province. (Screenshot/JCRB.COM)
China

On April 7, around 300 individuals dressed as police officers began attacking workers at the construction site of a large commercial building in Lanzhou City in northwestern China’s Gansu Province, causing more than 70 injuries and enormous property damage.

Except they weren’t police officers: they were fakes.

“They smashed everything they saw, cars, computers, office facilities. Everything’s damaged,” said Mr. Liao, who’s in charge of the renovation of the building, and witnessed the assault, according to the Procuratorate Daily, an official publication.

Awakened by the smashing, workers at the construction site got out of bed to fight back, but got beaten as well. More than 70 workers were sent to the hospital, and three are still under intensive care, the report says.

“Some workers have fractures, and some workers even had their neck bones broken,” Mr. Liao said. “While they smashed the place, they also snatched some workers’ cell phones, wallets and other valuables.”

A photo provided by the construction site shows an injured worker lying in hospital, face covered with cuts and blood, and a bandage over the wound on top of his head.

The investor in the building project, Zhu Guoyao, suspects that the attackers were hired by his business opponents. Zhu told the Procuratorate Daily that he received information that of his two opponents, Ye Chengyue and Lin Xiantong, were plotting an attack on the construction site last month, and he reported it to the police.

The two have a history of litigation. Mr. Liao thought he heard one of the assailants yell to his men “Everyone, smash as much as you can. If there are any problems, Boss Ye will handle it.”

Hiring gangs to harass business competitors is not rare in China. The trial of famous business magnate Liu Han recently opened, where he is facing 29 accusations of colluding with gangs, murdering nine people, organizing dozens of attacks, and having access to a variety of weaponry.

Dressing up in police clothes to carry out an assault is less well known.