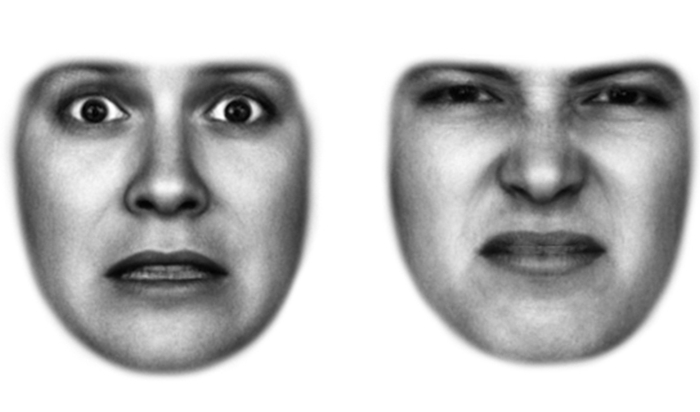 Facial expressions—such as wide-eyed fear or narrow-eyed disgust—are the result of how our eyes have evolved to perceive, not to communicate.

Our eyes widen in fear, boosting sensitivity and expanding our field of vision to locate surrounding danger. When repulsed, our eyes narrow, blocking light to sharpen focus and pinpoint the source of our disgust.

The findings by Adam Anderson, professor of human development in Cornell’s College of Human Ecology, suggest that human facial expressions arose from universal, adaptive reactions to environmental stimuli and not originally as social communication signals, lending support to Charles Darwin’s theories on the evolution of emotion.

Get It in Focus

“These opposing functions of eye widening and narrowing, which mirror that of pupil dilation and constriction, might be the primitive origins for the expressive capacity of the face,” says Anderson. “And these actions are not likely restricted to disgust and fear, as we know that these movements play a large part in how perhaps all expressions differ, including surprise, anger, and even happiness.”

“These emotions trigger facial expressions that are very far apart structurally, one with eyes wide open and the other with eyes pinched,” says Anderson, the paper’s senior author. “The reason for that is to allow the eye to harness the properties of light that are most useful in these situations.”

What’s more, emotions filter our reality, shaping what we see before light ever reaches the inner eye.

“We tend to think of perception as something that happens after an image is received by the brain, but in fact emotions influence vision at the very earliest moments of visual encoding.”

Anderson’s Affect and Cognition Laboratory is now studying how these contrasting eye movements may account for how facial expressions have developed to support nonverbal communication across cultures. The current research is published in Psychological Science.

“We are seeking to understand how these expressions have come to communicate emotions to others,” he says. “We know that the eyes can be a powerful basis for reading what people are thinking and feeling, and we might have a partial answer to why that is.”

Republished from Futurity.org under a Creative Commons Attribution 3.0 License.