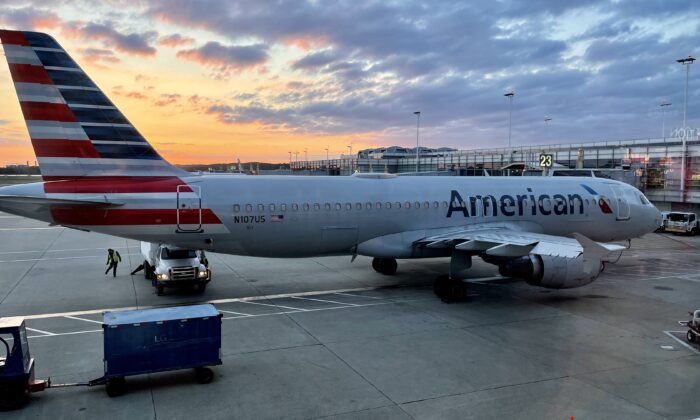 An American Airlines plane is seen at sunrise parked on the tarmac of the Reagan Washington National Airport (DCA) in Arlington, Va., on April 22, 2021. (Daniel Slim/AFP via Getty Images)
Policies & Impacts

The Federal Aviation Administration (FAA) on Jan. 26, greenlighted additional altimeters, allowing 90 percent of the U.S. commercial aviation fleet to land in low visibility at airports where a risk of interference from 5G wireless signals is present.

The agency had cleared about 78 percent of commercial planes as of the week ending Jan. 21.

Airline operations had faced some disruption last week due to the rollout of 5G telecom towers at U.S. airports by Verizon and AT&T, which had already been twice delayed by regulators.

The FAA has been reviewing aircraft devices called radio altimeters, which use radar to give precise measurements of a plane’s altitude for bad-weather landings.

It was feared that the new 5G towers could cause interference with the altimeters, as they operate on the same neighboring wavelengths as the 5G technology.

The FAA said that it had further approved seven additional altimeters, bringing the total to 20 approved.

The study found that while “some altimeters are reliable and accurate in certain 5G areas; others must be retrofitted or replaced.”

“The agency continues to make progress to safely reduce the risk of delays and cancellations as altimeter manufacturers evaluate data from wireless companies to determine how robust each model is,” said the FAA.

The airlines had called on regulators to halt the activation of 5G near airports, stating that doing so would cause “significant operation disruption” to air passengers, shippers, and supply chains.

The two telecom companies agreed after a deal brokered by the White House on Jan. 18, to delay switching on the 5G C-Band technology near key airports, even as they activated the service throughout the country.

Verizon temporarily delayed activating about 500 5G towers near airports, less than 10 percent of their planned deployment, while the carriers and the airlines work on a permanent solution.

The deal appears to have been largely successful, with relatively few cancellations or delays last week, according to airline executives.

The latest approvals by the FAA include more small regional jets and turboprops, which should smooth airline operations, but some aircraft models have been deemed too susceptible to interference to be cleared.

The FAA announced an Airworthiness Directive prohibiting Boeing 747-8, 747-8F, and 777 planes from landing at airports where interference could occur, affecting approximately 336 planes in the United States and 1,714 worldwide.

“The FAA issued the AD because many systems on Boeing 747-8, 747-8F and 777 aircraft rely on the altimeter, including auto throttle, ground proximity warning, thrust reversers and Traffic Collision Avoidance System,” said the agency.

The directive does not affect operations at most large American airports and the FAA has approved alternative means of compliance for the Boeing aircraft.

In the Jan. 25 update, the FAA said it would need to review the approvals it has granted each month to determine if the activation of new towers poses additional risk.

“We’re working with the wireless companies to get us tower activation information as early as possible so we can plan ahead,” the FAA said.

Some U.S. airlines are still concerned about Verizon’s plans to roll out additional 5G towers around Feb. 1 and want to know if those new towers could impact any current operations.

The 5G issue is disrupting landing in poor weather at a few smaller airports, such as when Alaska Air regional carrier Horizon Air was forced to cancel all commercial flights in and out of Paine Field in Everett, Washington, on Jan. 25, due to the restrictions on low visibility flying and 5G interference.

The airline blamed the rollout of 5G for creating disruptions to its regional air travel services and that its Embraer E175 jets still faced some restrictions.