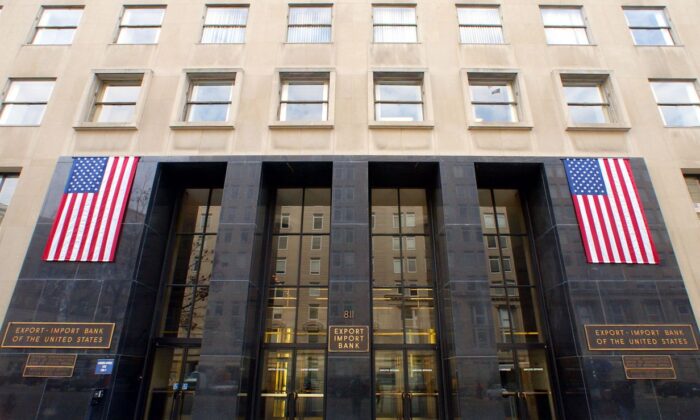 A generic photo of the Washington building that houses the Export-Import Bank, the Veterans Affairs Office of Construction, Board of Veterans Appeals, and the Administrative Office of the US Courts. (Paul J. Richards/AFP via Getty Images)
US

Small businesses seeking to increase their overseas sales are supposed to be the primary beneficiaries of loan guarantees by the U.S. Export-Import Bank (Ex-Im), although a new analysis by a nonprofit government watchdog finds most of the funds are going to corporate giants and corrupt foreign regimes.

“Small businesses, supposedly the intended beneficiary of the Export-Import Bank, received only $54.8 billion of the over $234 billion in total assistance since 2007, or about 23 percent” of the bank’s total funding, according to the report by Open The Books (OTB), a Chicago-based nonprofit that monitors government spending.

By filing more than 40,000 federal Freedom of Information Act requests and posting the checkbooks of 49 state governments, OTB has posted to the internet more than $6 trillion in public spending. The nonprofit’s goal is to “post every dime in real-time.”

By far the biggest beneficiary of Ex-Im lending is Boeing Co., the largest U.S. aircraft manufacturer and one of the world’s most successful designers and builders of commercial airliners.

While currently based in Chicago, the company is planning a move to Arlington, Virginia, in the near future.

“The Export-Import Bank has been nicknamed ‘Boeing’s Bank’ by critics, and it is easy to see why. From 2007-2021, the aircraft giant received 33 percent of all of the Export-Import Bank’s assistance, totaling over $66.4 billion, while the second largest vendor received just over $5 billion. That’s more than all small businesses received combined,” the OTB report said.

The second-largest beneficiary of the funding is Reston, Virginia-based Bechtel Corp., which ranked behind Boeing despite getting assistance for only seven contracts since 2007.

“The engineering and construction company received just over $5 billion from the bank for petroleum engineering in wealthy countries like the United Kingdom, Australia, and India, as well as with governments like Serbia and Kenya,” according to the OTB report.

General Electric Co. and its subsidiaries, through exports of industrial engines and machinery in more than 265 transactions, earned third place on the list of top vendors. The report said GEC got $4.7 billion in assistance between General Electric International Operations Co. and General Electric Energy Parts alone.

“The mandate of Ex-Im is ‘filling the gaps’ to provide liquidity—facilitating the wheels of commerce,” the report stated about the bank’s overseas funding activities. “[A total of] 147 countries have received some amount of aid since 2007.

“While the United States sent billions of aid to some of the most corrupt countries and repressive regimes in the world, equally disturbing is the amount that went to wealthy countries that don’t need our aid.”

The largest beneficiary among nations of U.S. taxpayer-guaranteed Ex-Im loans is Nigeria, which is ruled by a regime that’s among the world’s most corrupt.

“Ranked 149th in the world on a scale from least to most corrupt by Transparency International in 2020, importers in Nigeria received over $570 million from the Export-Import Bank,” the OTB report said. “It would be a miracle if any of those dollars actually reached their intended recipient.”

China, with the world’s second-largest economy, also was a large beneficiary of Ex-Im resources.

“Second to only the United States in GDP [gross domestic product], businesses in China nonetheless received more than $6.4 billion in U.S. Export-Import Bank assistance. Even amidst Donald Trump’s trade war with China, $128,062,638.20 flowed to China from 2017 to 2020,” the report observed.

Russia and Turkey are also big beneficiaries of Ex-Im funding.

“At least part of the over $1.9 billion that went to Russia likely went to line the pockets of [Russian President Vladimir] Putin’s oligarchs, who control most of that nation’s commerce.

“Sberbank, Russia’s largest financial institution, was recently sanctioned by the United States for Russia’s invasion of Ukraine, though they were approved for $29,103,807 of assistance from the Export-Import Bank,” the OTB report said.

“Human Rights Watch warned in 2021 that Turkish president Recep Tayyip Erdogan has been ‘dismantling human rights protections and democratic norms in Turkey on a scale unprecedented in the 18 years he has been in office.’ Still, the Export-Import Bank has sent over $6.2 billion to Turkey since 2007.”

The bank has been the source of controversy for nearly a decade, with conservative Republicans demanding that it be abolished as a corrupt example of crony capitalism, and Democrats defending it as an essential tool of U.S. foreign policy.

In 2015, the then-Republican-led Congress allowed Ex-Im to expire, but reversed itself five months later.