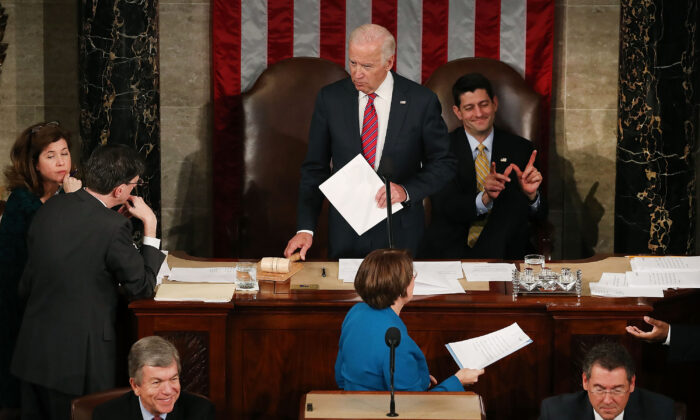 Explainer: Dueling Electors and the Upcoming Joint Session of Congress

Presidential candidates in the United States win elections by winning the most electoral votes.

The Electoral College system apportions a certain number of votes to each state. When voters in a state vote for a party’s candidate, they’re actually casting a vote for that party’s slate of electors, or people chosen to cast electoral votes.

Those electoral votes are counted by Congress. If a candidate gets 270 or more, they win the presidency.

In seven states on Dec. 14, a slate of Democratic electors chose Democratic presidential nominee Joe Biden. Republican electors, even though Biden was certified as the winner in the states, also cast votes for President Donald Trump.

The phenomenon created seven sets of so-called dueling electors, or alternate slates. Both groups are sending certificates of votes to Congress, which is slated to convene in a joint session on Jan. 6, 2021, to count electoral votes.

Dueling electors are highly unusual, but they have happened in U.S. history. The last time was in the 1960 election, when the governor of Hawaii certified electors for Republican Richard Nixon. Democratic electors cast their votes for Democrat John F. Kennedy.

A subsequent recount determined Kennedy actually won the state, and he was declared the winner in the joint session in 1961.

John Eastman, professor of law at the Chapman University School of Law, pointed to the Kennedy-Nixon scenario when talking about the seven dueling electors this time around.

“We have historical precedent here, and in each of these states, there is pending litigation challenging the results of the election. If that litigation proved successful, then the Trump electors, having met and voted, would be able to have those votes certified and be the ones properly counted in the joint session of Congress on January 6,” he told NTD.

Gary Gregg II, director of the McConnell Center at the University of Louisville, told The Epoch Times that short of “actual evidence of fraud” that would move Congress to certify the alternate set of electors, the ones certified by the state’s governors—all for Biden, in this case—will be the ones counted.

“It’s obviously a very, very long shot,” added Robert Hardaway, professor at the Sturm College of Law at the University of Denver, because “all the challenges have not been successful by both Trump and his supporters.”

“But that’s the reason for it,” he told The Epoch Times. “If later it’s determined the Republican slate should have been elected, they’ll have the vote already in place.”

In three of the seven states in question—Michigan, Pennsylvania, and Wisconsin—Republicans currently control the state legislatures while Democrats hold the governor’s mansions. In New Mexico and Nevada, Democrats control both. In Georgia and Arizona, Republicans control both.

Republicans have not been able to gain enough support to get the dueling electors certified by the top election official—usually the secretary of state—nor did the state legislatures exercise their constitutional right to take back the power to choose which candidate to give the electoral votes to.

According to the Congressional Research Service, when dueling slates are received, members of Congress in the joint session consider the list when its from a different state authority than the certified list, and conduct a vote. Acceptance of either slate would then require a concurrent agreement in both the House and the Senate.

If there isn’t a conflict in terms of state authority, the one determined to be appointed pursuant to the state’s election laws is counted. If there is no determination by a state authority of which slate was lawfully appointed, the two chambers agree concurrently to accept the votes of one set, or decide not to accept either set. If the two chambers don’t agree, the electors certified by the governor shall be counted.

After electors cast their votes this week, attention turned to the upcoming joint session, which takes place just three days after newly elected members of Congress are sworn in.

At least four people who will be in the House—Rep. Mo Brooks (R-Ala.) and Rep.-elects Marjorie Taylor Greene (R-Ga.), Barry Moore (R-Ala.), and Bob Good (R-Va.)—have committed to filing objections during the session.

Objections must be made in writing by at least one representative and one senator. No senators have committed to objecting.

Challenges were made by Democrats in 2016 but failed because no senators supported them. In 2004, Rep. Stephanie Tubb Jones (D-Ohio) and Sen. Barbara Boxer (D-Calif.) objected to votes from Ohio, but both chambers voted the objection down.

The basis for an objection appears to be that the electoral vote or votes were not “regularly given” by an electors, and/or that the elector was not “lawfully certified,” based on state election laws, according to the Congressional Research Service.

If an objection meets the requirements, the joint session is suspended, and each chamber withdraws to meet and debate the objection and choose whether to vote to uphold it. Unless both chambers vote in the majority for the objection, it fails. If it’s approved, it nullifies the state’s electoral votes, or could lead to the alternate slate being accepted.

Some experts see an objection succeeding as practically impossible.

“It’s so far out of the realm of possibility,” Gregg said. “The chance of getting a senator to agree, a Republican senator to agree, is a difficulty. Then to get the Senate and the House to agree? At this point … this is not going to happen.”

“I think when you get to the joint session of Congress, there’s going to be a fight about which of the slates of electors need to be counted based on the evidence and the statutory violations that are presented at the time,” Eastman said.

As of the current certified vote count, Biden has 306 electoral votes to Trump’s 232. The Epoch Times is not calling the race at this time.

In 1877, a joint session of Congress met to count electoral votes and faced dueling electors from multiple states where vote tallies were controversial. The Democrat-controlled House and the Republican-controlled Senate eventually came to a compromise, creating a commission that included House members, senators, and Supreme Court justices.

The commission met for weeks before deciding on March 2 to award contested electoral votes to Rutherford Hayes, a Republican, handing him the election.

Kevin Hogan, Cristina Kim, and Paul Greaney of NTD contributed to this report.