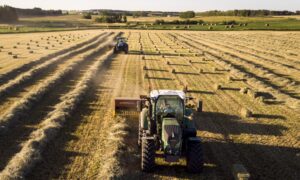 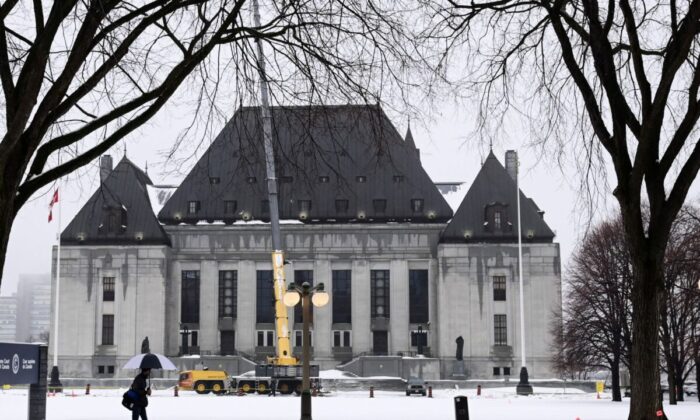 A pedestrian walks past the Supreme Court of Canada in Ottawa on Nov. 26, 2020. (The Canadian Press/Sean Kilpatrick)
Canada

The matter of carbon taxes and whether Ottawa retained ultimate authority to impose them on recalcitrant provinces under the auspices of fighting climate change finally had its day in Canada’s highest court, and the Greenhouse Gas Pollution Pricing Act was deemed constitutionally sound.

Proponents of the federal policy lauded the 6–3 split decision, but University of Saskatchewan professor Dwight Newman, the Canada research chair in indigenous rights in constitutional and international law, says it could have profound effects on the Federation.

Newman suspects that the very design of the carbon pricing act to exempt provinces with their own schemes was an admission that the provinces were “constitutionally capable” in regulating carbon dioxide emissions.

“There was a lot of case law that hadn’t suggested otherwise, before this,” he said. “So putting that more simply, the case law used to say that if the federal government had authority on the national concern test, the provinces couldn’t really be part of the same subject matter. And now the court is saying that that has changed.”

Dissenting justices Malcolm Rowe and Russell Brown argued that the Liberal carbon tax law as written opens the door to greater incursions by Ottawa into provincial affairs, with Brown saying the law “is bound to lead to serious tensions in the Federation.”

The federal carbon levy came into effect on April 1, 2019, beginning at $20 per tonne of CO2 emissions and imposed on provinces that either didn’t have their own greenhouse gas pricing schemes or had one that didn’t completely meet Ottawa’s requirements, namely New Brunswick, Manitoba, Saskatchewan, and Ontario.

While the latter two provinces lost constitutional challenges of the tax in their respective appeals courts, Alberta won its challenge in February 2020, setting the stage for the  Supreme Court of Canada’s decision on March 25.

Long-time critic of “anything goes” climate policy Ross McKitrick, professor of economics at the University of Guelph and a senior fellow at the Fraser Institute, says that for opponents of the tax, politics is the only way out of an already politicized situation.

“It’s unfortunate the provinces allowed the federal government to enter numerous overly alarmist claims about climate change being an ‘existential threat’ into the evidentiary record without challenge. They could have rebutted these simply by referring to past [Intergovernmental Panel on Climate Change] reports,” he said.

“But I doubt they put any effort into understanding the scientific or economic complexities, so they weren’t equipped to make their own case very effectively. The end result is that if people don’t want to pay a carbon tax, there won’t be any help from the courts. They’ll have to vote against it.”

McKitricks’s most recent analysis of the Liberal government’s plan to increase the federal carbon tax to $170 per tonne by 2030 indicates that raising the carbon tax would not reduce Canada’s emissions to pre-2005 levels and would fail to meet the Paris Accord commitments—the tax’s raison d’etre.

According to a recent report he co-authored titled “Estimated Impacts of a $170 Carbon Tax in Canada,” even this 467 percent increase from $30/tonne would not cut enough emissions, would kill 184,000 jobs, and would diminish Canada’s gross domestic product by 1.8 percent, or around $1,540 in current dollars per employed person.

University of Victoria economics professor G. Cornelis van Kooten, the Canada research chair in environmental studies and climate, was a proponent of carbon taxes and even signed a letter with fellow academics in 2007 urging the B.C. government to implement the scheme.

“But I’m not very happy with what B.C. has done. They’re taxing like crazy and they’re regulating like crazy,” he said in an interview.

A 2020 Canadian Energy Research Institute report on the effectiveness of B.C.’s carbon tax—implemented in 2008 and set to rise from $40 to $45 per tonne on April 1, 2021—found that the tax didn’t reduce emissions and “failed to achieve its goal.”

“I just see the carbon tax as a money grab that appeases the environmentalists … but doesn’t take account for the leakage,” said van Kooten of the inherent problem with carbon tax rebates, which he says acts at cross purposes in containing or mitigating energy use.

“So if we pay, say $100 carbon tax, we reduce our CO2 emissions. But at the same time, my daughter is getting let’s say a $100 [rebate], giving her money to spend that she would not otherwise spend, and some of that spending will be on activities like driving their car, which emits CO2 into the atmosphere,” he said.

“My view is you cannot simply have a tax based on increases in CO2 … which also benefits vegetation and reduces food insecurity,” van Kooten adds.

The history of how carbon dioxide ended up as “pollutant” in Canadian environmental law dates back to 2005, when then-environment minister Stephane Dion implemented the federal government’s UN’s 1992 framework on climate change, and had carbon dioxide declared a “toxic substance” by cabinet directive.