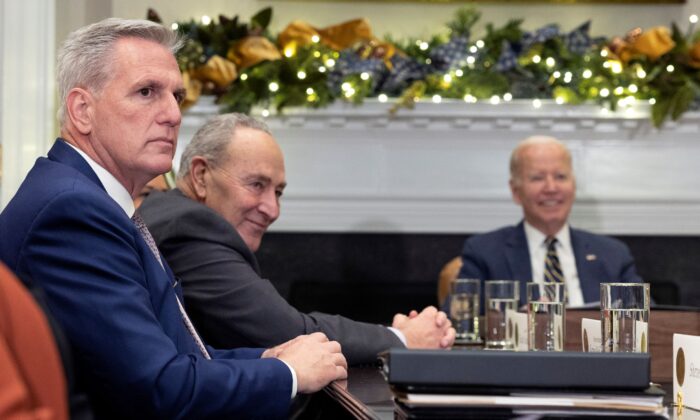 US House Minority Leader Kevin McCarthy attends a meeting with President Joe Biden (R) and other congressional leaders to discuss legislative priorities through the end of 2022, at the White House in Washington, on Nov. 29, 2022. (Kevin Dietsch/Getty Images)
By Andrew Moran

President Joe Biden and the Democrats are ensconced in a tough fight with the Republicans over the federal debt limit after the country exceeded the $31.381 trillion ceiling. The White House revealed that “there will be no negotiations,” while the GOP opposes a “clean” increase in the debt ceiling.

As both sides hammer out a deal to avert a debt-ceiling crisis, the Department of the Treasury has employed “extraordinary measures” to ensure the federal government can cover its obligations.

So far, the financial markets have not reacted to the situation on Capitol Hill, with many analysts and investors on Wall Street dismissing it as political theater.

But would preventing an increase in the debt ceiling risk economic turmoil?

Before 1917, Congress was mandated to approve every debt issuance in separate legislation. However, it was not until 1917 that U.S. policymakers created a debt limit through the Second Liberty Bond Act, which established a ceiling of $11.5 billion to facilitate greater flexibility in borrowing. By 1939, Washington put together an aggregate $45 billion debt limit that covered all government debt.

Only one other developed nation in the world maintains a debt limit: Denmark.

The legal limit of how much debt the federal government can accumulate has been adjusted dozens of times since the Second World War. The accrual of debt is the result of annual budget deficits and trust fund surpluses invested in Treasurys that are repaid later with interest.

Once the debt ceiling has been reached, the Treasury Department utilizes a wide array of accounting strategies to prevent defaulting on the federal government’s obligations. Some of these maneuvers consist of transferring funds from one agency to another when payments are due, selling current assets, suspending reinvestments of the Civil Service Retirement and Disability Fund and the Postal Service Retiree Health Benefits Fund, and halting the reinvestment of a government securities fund of the Federal Employees Retirement System Thrift Savings Plan.

In recent years, some have suggested that the Treasury could take additional action if Congress fails to raise the debt ceiling. One of these proposals has been to mint a $1 trillion coin, deposit the money in its Federal Reserve bank account, and withdraw from the funds to pay for its obligations. Proponents of this idea have alluded to Section 31 U.S. Code Section 5112, which states that “The Secretary may mint and issue platinum bullion coins and proof platinum coins in accordance with such specifications, designs, varieties, quantities, denominations, and inscriptions as the Secretary, in the Secretary’s discretion, may prescribe from time to time.”

If the Treasury Department exhausts all its options and the government fails to reach an agreement, Washington would no longer be able to issue new debt and would run out of money, effectively defaulting on its obligations, from entitlement payments to federal salaries.

Treasury Secretary Janet Yellen noted in a letter to Congress that a U.S. government default could lead to “irreparable harm” to the national economy. In addition, a report (pdf) from the Congressional Research Service (CRS) warns that this would trigger a contagion effect, wreaking havoc on U.S. and global financial markets.

According to Dennis Shirshikov, a professor of economics and finance at the City University of New York, the first event would be a government shutdown, leading to a federal payment delay and a national debt default.

“These events would likely cause a significant economic downturn,” Shirshikov told The Epoch Times.

“If the debt ceiling is not raised, the U.S. dollar and Treasury market would likely be negatively impacted,” he added. “The dollar would likely weaken as investors lose confidence in the U.S. government’s ability to pay its debts. The Treasury market would also be impacted as the government would not be able to issue new debt to finance its operations, leading to a decrease in Treasury bond prices and an increase in interest rates.”

Although federal law mandates the government to maintain its stream of payments to Social Security and Medicaid recipients, Washington could not borrow money to cover these benefits. This would force lawmakers to execute significant cuts to discretionary spending, effectively pushing Congress to prioritize its spending.

Since there would be a potential sell-off in the bond market, interest rates would rise, resulting in higher consumer borrowing costs, be it mortgages or auto loans. Eventually, according to experts, the United States would slide into a recession.

Robert R. Johnson, a professor at the Heider College of Business at Creighton University, summarized such an event as an “absolute disaster.”

“The Australian Open is happening right now, and, in tennis terms, it would represent ‘the mother of all unforced errors,” Johnson told The Epoch Times.

Both sides of the aisle agree that the nation will not get to this point.

“In the end, I think the important thing to remember is that America must never default on its debt. It never has, and it never will,” Senate Minority Leader Mitch McConnell (R-Ky.) told an event at the University of Louisville. “We’ll end up in some kind of negotiation with the administration over what the circumstances or conditions under which the debt ceiling be raised.”

Sen. Joe Manchin (D-W. Va.) acknowledged that “we have a debt problem,” but agreed that “it’s partisan” and “we have to work together.”

House Republicans are ostensibly targeting Social Security and Medicare. The 2023 Republican Study Committee Budget plan (pdf), which attempts to balance the budget in seven years, suggested that the GOP consider raising the retirement age, altering the rules for ancillary benefits, and modifying the methodology of cost-of-living adjustments (COLA).

According to Laurence Kotlikoff, a Boston University professor of economics and best-selling author, changes in Social Security would likely consist of a phased-in approach to the retirement eligibility age from 67 to 70. For Medicare, it would be raised from 65 to 67.

“Raising these ages would, via the phase-ins, continue the postwar tradition of passing the generational buck, i.e., making our kids and grandkids pay, in this case in the form of reduced benefits, for all the tax cuts and benefit increases that both parties have enacted over the years,” Kotlikoff recently wrote.

He believes House Republicans are “absolutely right” about America’s fiscal situation because “our country is, quite simply, broke.”

“Expropriating our progeny to the benefit of ourselves is immoral. Who does this to their children?” he stated. “It’s also slowly transforming the American Dream into the American Nightmare. But our national Ponzi scheme is now seven decades old. Every administration, including supposedly conservative ones like Eisenhower’s, has expanded our red ink. Most of the expansion has been off the books.”

That said, he agrees that the debt limit must be raised or suspended.

Maya MacGuineas, president of the Committee for a Responsible Federal Budget (CRFB), also thinks “it should be done so as quickly as possible” while also advancing “measures to improve our fiscal trajectory.”

“Congress should return to the past model of a debt ceiling increase, legislation to improve the fiscal situation, and a broad-based understanding that the debt ceiling must be increased in a calm and timely manner. We must not threaten default. The cost is simply too high,” MacGuineas said in a statement.

But could the national debt limit be raised while introducing substantial spending reforms? This might be the debate many Republicans in the nation’s capital are having.