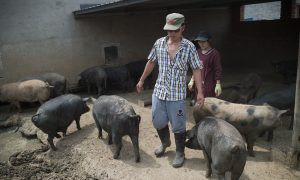 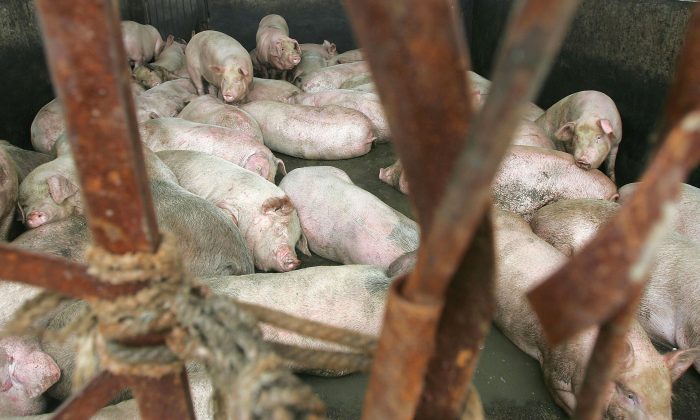 The African swine fever has spread to 27 provinces in China, with Shandong Province the latest to report an outbreak on Feb. 20.

The highly contagious disease kills nearly all pigs that contract it.

The announcement from China’s Ministry of Agriculture and Rural Affairs said that three pigs at a pig farm located in the provincial capital of Jinan died after contracting the virus, with 17 others showing symptoms of the disease. All 4,504 pigs on the farm were slaughtered in order to contain the disease. The carcasses were disposed of via burning or chemical treatment to ensure that no contamination occurs.

But in an effort to save on proper carcass disposal costs, many pig farmers are throwing the carcasses into rivers and reservoirs, or burying them underground—potentially contaminating the soil and water sources.

State-run newspaper Nanguo Jinbao reported on Feb. 18 that about 50 pig carcasses were found floating in the Dule River, which runs through Liuzhou City in the southern Chinese region of Guangxi.

On Feb. 12, Radio Free Asia published a video taken near the Nangang township in Lianyungang City, Jiangsu Province, where hundreds of pig carcasses can be seen floating in a river.

The outbreak, which first appeared in the northeastern city of Shenyang in August last year, is taking its toll on China, as the world’s largest producer and consumer of pork.

Now, the only four provinces left untouched by the disease are the northwestern regions of Xinjiang and Tibet, Hebei Province, and the southern island province of Hainan.

Chinese news portal Sohu reported in July 2017 that farmers can earn 200 to 300 yuan ($30 to $45) per pig if they sell the carcass to a slaughterhouse to process, though that is illegal.

Lee Kwang-hoon, a Ph.D. of veterinary medicine from South Korea, told the Chinese-language Epoch Times on Feb. 20 that the problem with improper disposal is that the carcass could have other diseases. If the carcasses pollute water sources, then this could threaten the lives of other livestock who drink the water.

In China’s rural areas, drinking water is usually filtered but not sterilized. Lee is concerned that the polluted water can make people sick.

“Large amounts of E. coli can enter the water from dead pigs’ intestines. People will suffer diarrhea, abdominal pain, severe dehydration, and even death after drinking this kind of water,” Lee said.

Chen Bingzhong, a Chinese health expert, told the Chinese-language Epoch Times in a Feb. 20 interview that the virus could potentially have a detrimental effect on human health.

Chen, 86, is a retired professor from Peking University’s Health Science Center and former president of the China Health Education Center, which served as the propaganda division of the central government’s health department (the Ministry of Health before the agency changed its name to National Health Commission).

The African swine fever virus is not known to have harmful effects to humans, but Chen said it could have the potential to affect one’s nervous, cardiovascular, and respiratory systems, given the typical behavior of a virus.

Chen said that a longer amount of time is needed to properly observe the virus’s impact on the human body, including a pathological and toxicity analysis.

Chen believes that “the impact could be huge,” especially for children, the elderly, or those with weak immune systems, as they could be susceptible to the virus’s effect after eating infected pork products or drinking water that has been contaminated with the virus.

Taiwan, Japan, and South Korea have already detected imported Chinese products with the disease. Meanwhile, the disease has appeared in pigs in Vietnam and Mongolia since January, though both countries have not yet linked the outbreak to China.

Early on Jan. 22, Taiwan customs officials confiscated a ham sausage made by the Chinese brand Jinluo, originating from Shandong Province, after it tested positive for the virus. But at the time, the Chinese regime said there was no outbreak of the African swine fever in Shandong.

Taiwan’s Council of Agriculture accused the Chinese authorities of failing to share the truth with them and not obtaining a real picture of the epidemic.