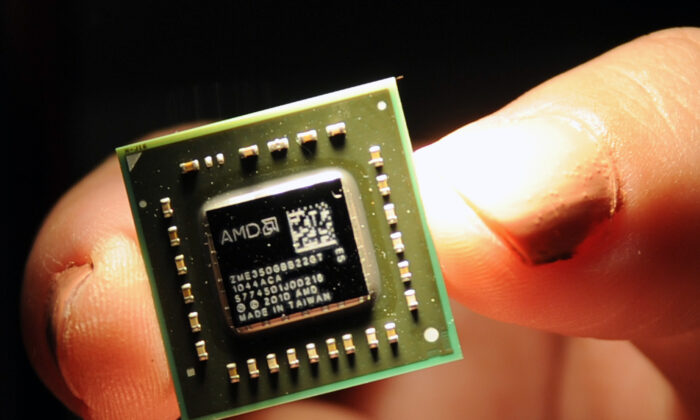 A chip the size of a coin, used in central processing units and graphic processing units developed by the U.S.-headquartered Advanced Micro Devices (AMD), is displayed during a press conference held in Taipei, Taiwan, on May 24, 2011. (Sam Yeh/AFP via Getty Images)
Taiwan

After the recent media report of a Chinese communist regime organizations’ infiltration of Taiwan universities and research institutions, Taiwan’s Ministry of Education asked the group to leave immediately. The Education Minister pledged to make a comprehensive inspection of colleges and universities for similar violations.

According to a report by the Central News Agency, on Nov. 8, Taiwan’s Ministry of Education requested the “Hsinchu Office of the Cross-Strait Tsinghua Research Institute” to immediately leave Taiwan’s National Tsing Hua University (NTHU) premises. The institute, jointly established by the Chinese regime’s Xiamen Municipal Government and Tsinghua University in Beijing, has engaged in technology research and development, talent acquisition, and investment and other businesses. Its Chinese official background has attracted much attention.

Taiwan Citizen Front’s director Hsu Guanze told The Epoch Times on Nov. 9 that the gravity of the Cross-Strait Tsinghua Research Institute incident is that the Chinese communist regime may set up offices to infiltrate the industry-university cooperative projects in various Taiwanese universities and colleges.

Hsu pointed out that Taiwan plays an important role in the semiconductor IC manufacturing industry while the United States is establishing a global supply chain security system. If Taiwan’s academia have been infiltrated by a foreign government, it will jeopardize Taiwan’s position in the global industrial supply chain.“China may use this method of setting up offices to drain Taiwanese talent to achieve its political goals,” he said.

National Security Bureau Deputy Director-General Chen Chin-kuang, confirmed the NTHU incident on Nov. 8, and said that China currently has a shortage of semiconductor talent. Having grasped the significance of the NTHU incident, Taiwan’s national security and intelligence agencies will send the information to relevant departments.

Zeng Chien-yuan, chairman of the New School for Democracy in Taiwan, told the Chinese language Epoch Times on Nov. 9, that Taiwan needs to be more vigilant about the infiltration activities of the CCP. It should prevent similar institutions from sending any Tsinghua University research results to mainland China.

Zeng said, “Taiwan is an open society. Everyone welcomes different opinions or people from outside, including those from mainland China. This will also allow some people with ulterior motives to conduct high-tech and intellectual property theft in Taiwan. Taiwanese society lacks awareness about this.”

Luo Ya and Zhao Fenghua contributed to the report.