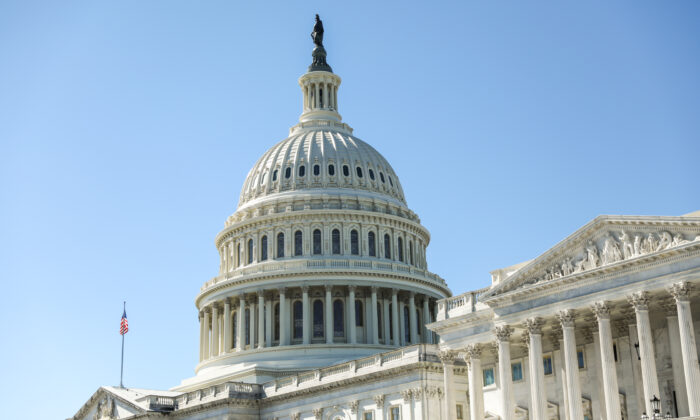 Multiple provisions of the Respect for Marriage Act the Senate is expected to approve after Thanksgiving threaten thousands of Christian churches, as well as faith-based social service agencies and businesses, with the loss of their federal tax exemption, according to legal experts interviewed by The Epoch Times.

The threat isn’t directly stated in the proposal but rather is a result of the proposal’s addition of a new limitation on religious practice and expression. The proposal repeals the 1993 Defense of Marriage Act—which defines marriage as between one man and one woman—and instead recognizes unions of any two individuals, consistent with the Supreme Court’s 2015 Obergefell v. Hodges decision.

The Senate voted 62–37 on Nov. 16 in favor of cloture, which ended debate on the proposal and cleared the way for a vote on final passage that’s expected to take place the week after Thanksgiving. A dozen Republican senators voted with all 50 Democrats to end debate. The House of Representatives approved the measure in July.

“If a nonprofit is engaged in behavior that is ‘contrary to public policy,’ then the IRS has the discretion to strip that organization of its tax-exempt status,” Alliance Defending Freedom (ADF) senior counsel Greg Baylor told The Epoch Times.

Heritage Foundation Vice President for Domestic Policy Roger Severino was even more blunt in his assessment of the proposal, telling The Epoch Times: “This legislation is nothing more than a way to weaponize the federal government against people of faith, and it offers no additional benefits or protections that same-sex couples don’t already have.

“Instead, this bill encourages radical activists to sue religious schools, colleges, and adoption agencies and will empower Biden’s 87,000 new IRS agents to revoke the tax-exempt status of faith-based nonprofits. Congress should be protecting our First Amendment rights instead of pushing divisive legislation that nobody needs.”

Proponents of the proposal agreed to an amendment before the cloture vote that they claimed would eliminate the act’s threats to religious freedom. But opponents, led by Sen. Mike Lee (R-Utah), rejected the amendment and offered an alternative.

No vote on the Lee amendment was allowed by Senate Majority Leader Chuck Schumer (D-N.Y.), but it may yet be considered prior to the post-Thanksgiving proceedings. Lee described the amendment that was incorporated in the proposal as “severely anemic and largely illusory.”

The Utah Republican warned colleagues: “Religious Americans will be subject to potentially ruinous litigation, while the tax-exempt status of certain charitable organizations, educational institutions, and nonprofits will be threatened. My amendment would have shored up these vulnerabilities. It is a shame it wasn’t included.”

Sen. Ron Johnson (R-Wis.) said in a statement following the cloture vote that he would’ve supported the Respect for Marriage Act if senators had agreed to include the Lee amendment.

“The substitute amendment did not provide sufficient protection for those with strongly held religious beliefs and leaves a lane open for discrimination by activist groups, state governments, and the IRS. Senator Lee proposed an amendment that would have prohibited the government from taking such action, and even offered to vote for the bill if they accepted it. I would have also supported the bill with his language,” Johnson said.

“The fact that the bill’s sponsors rejected his offer speaks volumes. Religious liberty should be upheld for all and those with sincerely held religious beliefs should not be discriminated against for their views on marriage.”

Sen. James Lankford (R-Okla.) denounced Senate colleagues in a floor speech for not allowing any amendments to the proposal other than the one offered by the bill’s proponents that Lee condemned as too weak.

“Today, my colleagues moved forward on a bill to open up debate—without amendment, may I add—on a bill that would certainly affect the religious liberty of countless people across the country,” Lankford said, adding that dozens of religious liberty groups oppose the bill.

“That’s not just my opinion. Religious liberty groups from all across the nation and from all backgrounds have already been speaking out on this issue. Just in the last 24 hours, the Alliance Defending Freedom, the American Association of Christian Schools, Catholic Vote, the Center for Urban Renewal and Education, the Centennial Institute, the Christian Employers Alliance, Concerned Women for America, Eagle Forum, Ethics and Religion Commission, the Faith and Freedom Coalition, the Family Research Council, the Family Policy Alliance, the Heritage Foundation, Lifeline Children’s Services, the Religious Broadcasters Association, Religious Freedom Institute, the U.S. Conference of Catholic Bishops, and the Ethics and Public Policy Center have all spoken out and said this bill that is currently on the floor of the Senate will damage religious liberty.”

The Oklahoma Republican further noted that the bill provides a private right of action for an individual to sue another individual unless the alleged violation involved concerns religious liberty.

“Religious institutions are rising up, reading the text of the bill rather than just listening to the debate on this bill and saying, ‘There is a problem here.’

“This bill puts faith-based child welfare organizations who are operating in accordance with their sincerely held religious beliefs, aiming to place children in loving families, it puts them in jeopardy.”

Lankford reminded his colleagues that Catholic-based services “have already been shut out of the child welfare systems in Illinois, in the District of Columbia, California, and in Massachusetts. And then this bill is coming.”