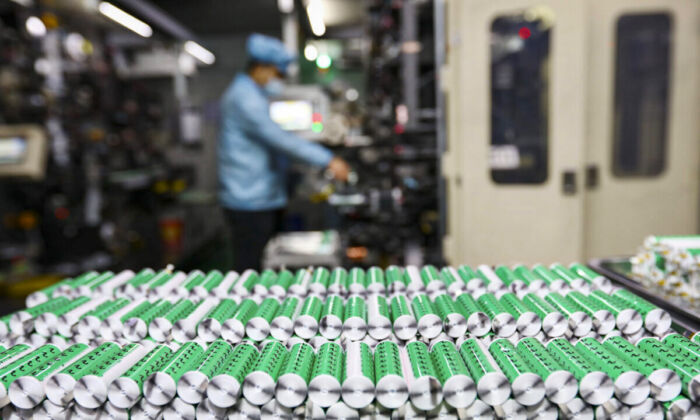 Lithium batteries displayed in the workshop of a battery manufacturing facility on Nov. 14, 2020. (STR/AFP via Getty Images)
Economy

Increased domestic lithium production plays a crucial role in President Joe Biden’s green energy plan, as 2021 marked the largest rollout of solar, wind, and electric batteries in the history of the United States.

Nevertheless, lithium mining has quietly revealed itself to be a significant contributor to environmental pollution in the frantic rush to abandon fossil fuels.

On May 2, the Biden administration announced the investment of more than $3 billion to make more lithium batteries and their components. It’s a pivotal part of the president’s goal to have at least half of all vehicle sales in the United States be electric by 2030.

While much of the carbon emitted from mining depends on the rock it’s extracted from, this technique still produces at least 15 tons of CO2 for every ton of lithium harvested.

Generally speaking, mining is a dirty business. Mineral extractions like lithium and coal—a fossil fuel—both fall under this umbrella. Collectively, the mining industry generates between 1.9 and 5.1 gigatons of carbon emissions annually.

The other approach to accessing lithium involves removing the metal from brine in areas with salt flats. However, this approach requires, on average, 500,000 gallons of water to procure a single ton of lithium. While it’s a less carbon-intensive process, brine extraction still results in tens of thousands of gallons of highly toxic wastewater needing proper storage or disposal.

And this is just the tip of the iceberg of green energy manufacturing behind the scenes.

Elements like cobalt and nickel are also crucial for renewable technologies like electric car batteries, which is another pollution-heavy withdrawal.

Open pit hard rock mining is the method scheduled for use at Thacker Pass, the largest lithium reserve in the United States.

Wind, solar, and electric-car batteries are dependent on the world’s lightest metal to function.

In the meantime, some experts are sounding the alarm over the not so green reality of renewable energy.

“While lithium-ion batteries are light-weight and convenient for modern-day electronics, they not only emit a large amount of carbon dioxide to produce, but they also tap into precious water reserves,” chief operating officer of Greenly, Matthieu Vegreville, told The Epoch Times.

Vegreville explained the carbon footprint of lithium mining, in comparison to other fossil fuel extractions like coal and oil, typically produces more carbon emissions. That’s because lithium products such as batteries require a more material-intensive process.

“And as the demand for battery material increases, it doesn’t make the process any easier,” he added.

President of the National Mining Association, Rich Nolan, noted during a press statement that Biden’s push for ramped-up domestic lithium production will make America more energy independent as the country continues shifting away from fossil fuels.

Nolan added the United States needs to build on this green momentum and approve new hard rock mines or face the continuation of geopolitical mineral dependence that is “completely dominated by China.”

Secretary of Energy Jennifer Granholm said Biden’s historic investment in electric battery production and recycling would give the United States “the jolt it needs to become more secure and less reliant on other nations,” in a May 2 press release.

Though some environmental experts believe that when it comes to lithium extraction, the end doesn’t justify the means.

“Our position is: mining is very destructive to the environment and communities. It needs to be approached judiciously,” John Hadder, director of Great Basin Resource Watch, told The Epoch Times.

Hadder has fought for Nevada to address regulation oversights and environmental blowback from the controversial Thacker Pass project in that state. He also maintains that if politicians were really concerned about reducing greenhouse gasses quickly, there are cheaper, faster, and easier ways to do it.

“If you want to reduce greenhouse gasses quickly, we can do that by changing existing energy and public transportation usage,” he said before adding, “We already know it’s possible. We did it during COVID.”

The Thacker Pass project has been met with considerable resistance from environmentalists.

Though due to concerns over groundwater contamination, the Nevada government only approved drilling above the water table for Thacker Pass.

Hadder added that the lithium ore extraction will use what’s called an acid-leech process, which requires the use of sulfuric acid.

Ironically, the majority of the sulfur needed for this will be purchased from the oil and gas industry since it’s the cheapest way to acquire the chemical.

Compounding this is the absence of a leak analysis for the project, which Hadder believes creates an environmental powder keg.

“How long will it be seeping and what does the management look like down the road? This hasn’t been adequately addressed,” he said.

In November 2021, United Nations  Secretary-General Antonio Guterres remarked, “We’re digging our own graves” with mining, drilling, and burning during a world leader’s summit on climate change.

Regardless, the data and impacts of lithium production have been ignored in favor of rebranding the same heavy polluting industries with the label “green energy.”

At the other end of the lithium debate are the spent electric batteries. Improperly disposed lithium batteries can be very unstable, causing landfill fires that can go on for years. The resultant toxic chemicals released into the air can also impact air quality and carbon emissions.

Vegreville explained batteries can be recycled, but lithium-ion units are especially dangerous due to fire hazards.

“One of the most ecologically friendly ways to dispose of a lithium-ion battery is to dismantle it,” he said.

Though the demand for lithium batteries is set to become a $116 billion industry by the year 2030, leaving some experts concerned that production may outstrip the industry’s ability to properly handle waste on the back end.

The U.S. Environmental Protection Agency admits special recycling and hazardous waste facilities are needed to deal with the influx of electric batteries. One standard electric car battery on average weighs over 1,000 pounds.

In other words, the recycling end will need to be a highly regulated, multi-million dollar industry in its own right to reduce pollution and fire hazards.

Moreover, Hadder says the current political demand for lithium could end with a push for more toxic, unsustainable projects in the long run. And while he supports a transition to renewable energy overall, the current gold rush mentality for lithium is anything but green.

“What we’re seeing now is a repeat of patterns and practices of the past,” Hadder said.