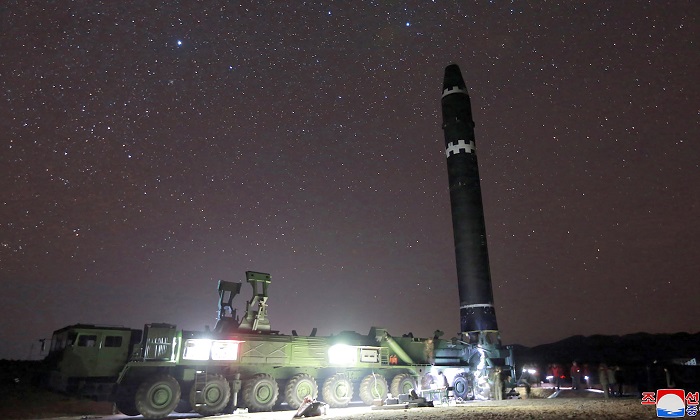 This photo taken on Nov. 29 and released on Nov. 30 by North Korea's official Korean Central News Agency (KCNA) shows the Hwansong-15 missile which is capable of reaching all parts of the U.S. (KCNA via KNS/AFP/Getty Images)
US News

“It is intended to deal with a threat like this, but the test record stinks and the payload is roomy enough that we need to think worry about countermeasures,” Lewis said.

Lewis and others spoke with the National Interest after North Korea launched the Hwasong-15 on Nov. 29. The missile reached an altitude of 2,800 and came down 130 miles off the coast of Japan.

Based on North Korean released images of the Hwasong-15, experts say it is capable of delivering a nuclear weapon anywhere in the U.S. The new missile could only be several tests away from being fully capable of being used in a wartime scenario.

Kingston Reif, director for disarmament and threat-reduction policy at the Arms Control Association, said the new missile “is more than large enough to carry decoys/countermeasures” that would put pressure on the GMD.

Reif explained that the Defense of Department said the GMD system has a ‘demonstrated capability’ to defend against a small number of simple ICBM threats that also employ ‘simple countermeasures.’

“It’s not clear how DoD defines ‘simple countermeasures,'” he said.

“We do know that the system has never been tested against ‘complex countermeasures,’ which DoD defines as ‘Use of target dynamics and penetration aids,’” Reif said.

“Are such countermeasures beyond the capability of North Korea to develop? I highly doubt it.”

Reif said test results have not been promising.

“Overall, flight intercept testing of the system has not demonstrated that GMD is capable of reliably defen[ding] the U.S. homeland against even a limited threat,” Reif said.

Senior intel analyst tells me that the North Korean Mobile Missile launcher was produced by the Wanshan Special Vehicle Company in China, and sold to North Korea, who made modifications, including adding a 9th axle pic.twitter.com/M4yMJqpZqG

Missile expert Vipin Narang, an associate professor of political science at the Massachusetts Institute of Technology, said policymakers can’t rely on the GMD to shield U.S. cities from a North Korean missile attack.

Arms-control expert and president of the Ploughshares Fund Joseph Cirincione said the Hwasong-15 would most like overwhelm U.S. efforts to stop it in an attack.

“It could overwhelm, fool and blind the radars, sensors and kill vehicles. You cannot stop this thing.”

Think your friends may not know about this? Share it on Facebook to keep them up to date and help support independent journalism. Thank you!