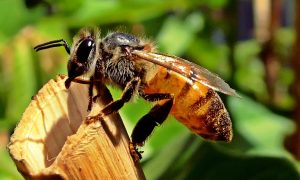 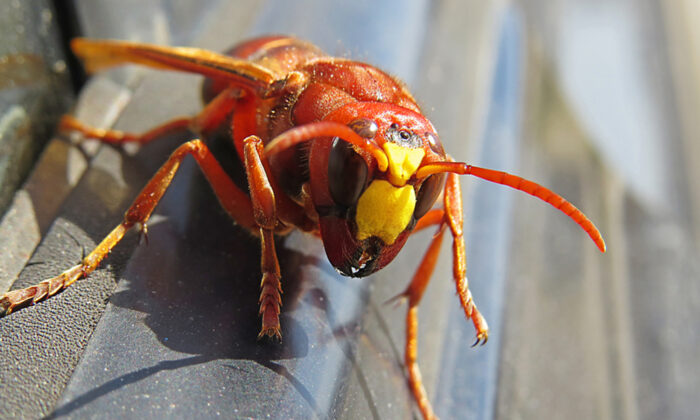 Asian giant hornets with the nefarious nickname “murder hornets” have recently been discovered in the United States for the first time. Scientists are rallying to prevent a 2020 invasion from the pests, fearing the U.S. honeybee population could be vulnerable to attack with devastating consequences.

The giant hornets attack using mandibles shaped like spiked fins to decapitate their primary prey, the honeybee, which is already an endangered species. The hornets target honeybee hives in groups of up to 50 and are able to decimate an entire colony in mere hours before flying off with the bodies to feed their young.

The giant hornet (Vespa mandarinia in Latin) is the world’s largest hornet, and it measures between 1.5 and 2 inches long. The species prefers low-altitude mountain and forest habitats.

According to The New York Times, the first two murder hornet specimens in the United States were discovered in the northwest corner of Washington state in the fall of 2019. Scientists are keen to take advantage of the brief window to eradicate the species before it can do major harm to native bee populations.

“This is our window to keep it from establishing,” said Chris Looney, an entomologist at the Washington State Department of Agriculture (WSDA). “If we can’t do it in the next couple of years, it probably can’t be done.”

Etymologist Susan Cobey described the murder hornet as “like something out of a monster cartoon with this huge yellow-orange face” to Washington State University’s WSU Insider. Seth Truscott of WSU explained that the hornets are sometimes—either accidentally or deliberately—transported in international cargo and are at their most destructive in the late summer and early fall.

“They attack honeybee hives, killing adult bees and devouring bee larvae and pupae while aggressively defending the occupied colony,” Truscott said. “Their stings are big and painful, with a potent neurotoxin. Multiple stings can kill humans, even if they are not allergic.”

Ruthie Danielsen, a beekeeper in Whatcom County, Washington, spoke on behalf of her peers. “Most people are scared to get stung by them,” she told the NY Times. “We’re scared that they are going to totally destroy our hives.”

We've had lots of questions about how Asian giant hornets compare in size to other similar-looking insects. Check out…

In November 2019, additional specimens were discovered across the border to Canada in British Columbia and on Vancouver Island. Beekeeper Conrad Bérubé was tasked with exterminating the Vancouver Island hive and was stung seven times or more, describing the pain as “like having red-hot thumbtacks being driven into my flesh.” Murder hornets kill up to 50 people per year in Japan.

Bearing through the pain and ultimately surviving, Bérubé managed to destroy the hive and collect samples for analysis.

As of May 2020, WSDA’s Chris Looney is leading the murder hornet push back by planning and placing hundreds of hornet traps in the Washington state area. Looney and his peers are also investigating the feasibility of various tracking methods to help lead them to hornet hives and eliminate colonies at their source.

As of May 2020, Washington’s agricultural officials are urging American citizens to report any sightings of the giant hornets via a smartphone app, reports Fox 59. “Don’t try to take them out yourself if you see them,” Looney advised. “If you get into them, run away, then call us!”

The WSDA even uploaded a hornet identification chart to Facebook on April 29. “It is really important for us to know of every sighting,” Looney said, “if we’re going to have any hope of eradication.”

It turns out, however, that honeybees are not entirely helpless and have even been found to go on the offensive against these murderous counterparts.

Japanese honeybees in particular have demonstrated an incredible defense tactic, according to a 2012 study funded by the Ministry of Education, Culture, Sports, Science, and Technology (MEXT) of Japan. They have been observed surrounding an intruding Asian hornet and “vibrating” to achieve a raised temperature of over 115 degrees Fahrenheit (46 degrees Celsius) in the hive, essentially cooking and killing the hornet.

The study’s authors called the phenomenon the “hot defensive bee ball.” The comparatively inexperienced American honeybees, however, have yet to develop this tactic.