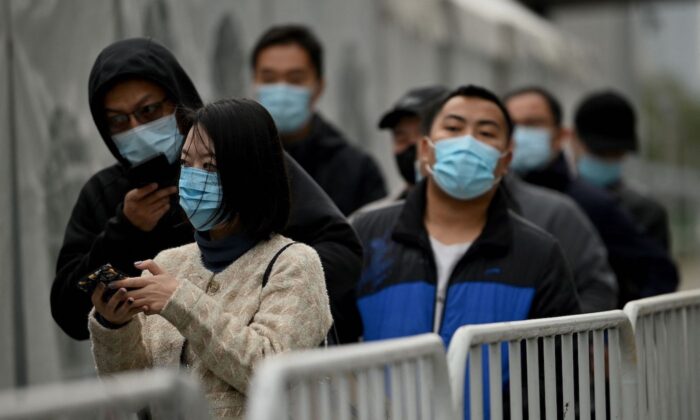 Haizhong Ning
Haizhong Ning was a state employee and worked for a real estate company in China, before moving abroad and working as a reporter with a focus on Chinese affairs and politics for more than seven years.
View profile
Follow
and Luo Ya

Since the pandemic, Chinese media have often attributed the Chinese regime’s questionable pandemic containment “success” to “grid management,” which was said to be an advantage of the socialist Chinese society.

By March 2020, around 4.5 million grid staff served as China’s first line of defense in the pandemic, “like in a wartime state,” state-run media reported; they are the grassroots “intelligence, interpreters, and gatekeepers” of national policy.

Take Haiyan County of the eastern coastal province of Zhejiang as an example.

The local government mobilized 10,000 grid staff to “guard” communities with door-to-door visits, taking temperatures, and ensuring residents wear masks and are up-to-date with current policy, in an effort to serve a population of 160,000 of a local township, Wuyuan. These grid staff often introduce themselves as the “warriors” of the nation’s line of defense.

China adopted digital grid management in urban housing and development in 2005 as part of its smart cities system. With the grid, the central governance penetrates the grassroots via residents’ cellphones, TVs, and computers.

Grid staff are designated work within a set geographical range and function as the “peripheral nerve” of governance, state-run media reported. They help to “ensure the effectiveness of the governance, serve the people, and build a society of Chinese socialist characteristics.”

Tang Ao, a China affair analyst, told the Chinese edition of The Epoch Times that grid staff are entitled to the job category of “service” and can deprive people of their basic rights to conduct personal daily activities.

“They, in fact, monitor and control the public; following the regime’s strict zero-COVID policy, and restrict peoples’ freedom to move about in the name of ‘containing the pandemic,’” Tang said.

Tang explained that the Chinese Communist Party (CCP) has extended its surveillance of the masses from community-level in the 60s to individual homes with the implementation of the grid.

He said, “Grid management, in the name of ‘governance by the masses,’ actually functions to spy on people through so-called ‘public service,’” as the masses become part of the CCP spy mechanism.

Take Shandong, an eastern coastal province, as an example. According to Issue 4 of its 2021 party branch magazine (pdf), the party branch is “secured on the grid.” Shandong Province was divided into 168,000 grid cells, with 257,000 grid staff registered to oversee the province, and at least 97,000 party grid branches established throughout.

The magazine listed a pilot in a local district, Fushan, where one grid staff member was assigned for every 50 households, and up to three grid assistants for each village; it formed a “five-in-one network” of local party branches—from town to district and village level; along with grid staff and grid assistants. Together, the grid staff eliminated governance loopholes in the countryside.

It also stressed the successful combination of big data, AI, and the “network” to ensure “100 percent surveillance coverage,” and “stability maintenance.”

In recent years, China’s surveillance cameras have been extended to the countryside through the Sharp Eyes project, with cameras installed on every street corner; resulting in the whole of China coming under the CCP’s one big monitoring net, while achieving the combined benefits of “intelligence and stability maintenance.”

The CCP is using the term “stability maintenance” to maintain power and control over any “unstable factor” of the society, some experts said.

Wu Zuolai, a Chinese scholar and writer, told The Epoch Times that “people are the CCP’s main enemy.”

In March 1998, the CCP established a “stability maintenance work leading group” when Jiang Zemin was the leader of the regime.

In September 2001, the CCP publicized an “opinion to strengthen stability maintenance,” which demanded concrete surveillance into “the village, household, and individual.”

The “opinion” listed several unstable factors, such as “hostile forces, … separatists, … engaging in activities involving in ethnic, religious, and human rights … in an attempt to undermine social stability.”

The “opinion” also listed Falun Gong as one of its so-called “unstable factors.”

Falun Gong is a spiritual practice that was introduced to the public in 1992, after which it spread widely throughout Chinese society. It was banned in 1999 when the CCP regime saw it as a threat to their control over the masses.

The CCP’s grid management was first piloted in Dongcheng District, Beijing, in 2004.

Take a local district in Hunan Province, south-central China, as an example. Wuling District has a population of 420,000. In 2014, the local government divided the district into 577 grid cells with an average of 350-500 households per cell, and hired 550 grid staff. The local official claimed the system was a well-constructed example of a “one grid staff-one Party branch” work model.

In 2018, Luohe City in central China’s Henan Province, adopted a “four staff per grid cell” model: one community service assistant, one institution service staff, one police officer, and one supervising cadre. The official insisted on tying “party, government, and service” in one grid through big data “networks and applications.” The entire 19 urban communities in the region were divided into 78 grid cells.

To date, Chinese media have reported some regions employing up to 10 staff per grid cell for better “community service.”

The CCP has touted the contributions of ordinary citizens to neighborhood surveillance efforts and publicized them using different names.

In Beijing, for example, the “Chaoyang masses” are an example of a grid management group.

Chaoyang is a core district in Beijing; the Chaoyang masses, the most famous neighborhood watch group in China, worked hard to report on the misconducts of stars and celebrities but never on CCP officials.

A Chinese report from November 2021 indicated that the “Chaoyang masses” had evolved into a large organization with 140,000 registered members, covering an area of 183 square miles in Chaoyang District, which is equivalent to 765 volunteers or grid staff per square mile.

The report read, “on the streets of Chaoyang District, there are gatekeepers, security guards, retired elderly, volunteers, delivery guys, and white-collar workers; they are the ‘Chaoyang masses.’”

In an earlier interview with the Chinese edition of The Epoch Times, Wu Shaoping, a Chinese human rights lawyer, described the “Chaoyang masses” as an organization with a “terrorist nature.”

In a September 2019 issue of the Chinese human rights watch magazine, Bitter Winter, it was stated that grid staff are in fact “tasked with monitoring unstable factors, such as dissidents, religious believers, and petitioners in the grid area; and reporting on them in a timely manner with mobile phones.”

The magazine revealed that grid staff are “punished if they fail to report within 2 hours of any petitions, protests, or mass incidents; the punishment will be doubled if they fail to control the unstable factors such as Falun Gong adherents. There’ll be an award when one Falun Gong adherent or a lead to petitioners’ whereabouts is reported; the grid staff will be rewarded with 1,000 yuan ($156.87) for each person detained.”