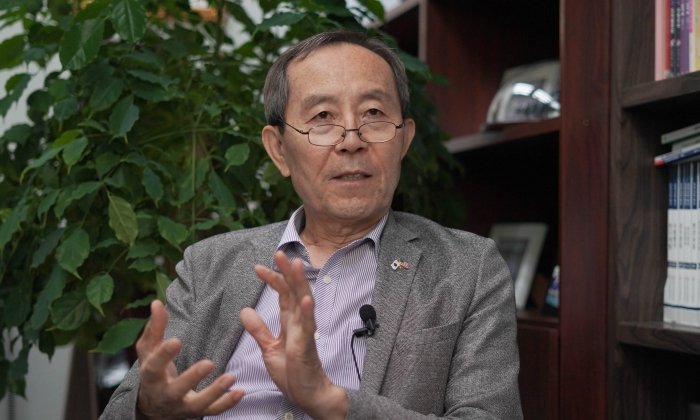 Chae Woo-seok, President of Korea’s Association of Defense Industry Studies, stressed that South Korea and the United States should form a defense alliance to ensure containment of China and North Korea in an interview with The Epoch Times on June 14, 2022. (Lee Yu-jeong/The Epoch Times)
Asia & Pacific

South Korea maintains strong relations with the United States and is strengthening its defenses as a precaution against the nuclear threat posed by its neighbor North Korea. Military experts see value in these precautionary steps but suggest the more reliable approach to deterring both North Korea and China would be for South Korea to sign a formal alliance with the United States.

During a summit meeting in May, South Korean President Yoon Seok-yeol and U.S. President Joe Biden met to explore new avenues of cooperation, expanding the security and economic alliance between the two countries into a comprehensive global alliance that includes technology and supply chains. The talks focused on strengthening global security, improving supply chains, and sharing the latest technology, including chips, batteries, core minerals, quantum technology, biotechnology, energy, and space.

The talks also addressed the importance of deterring the ongoing threats posed by North Korean President Kim Jong-un. Representatives for the United States reaffirmed their commitment to South Korea and both countries agreed on the merits of conducting joint military exercises. If required, the United States would also make its strategic weapons available to South Korea.

While the meeting did not result in a formal alliance, both countries agreed to explore further the signing of a Korea-U.S. Reciprocal Defense Procurement (RDP) agreement. The RDP is a memorandum of understanding used by the U.S. Department of Defense and its allied nations to strengthen relations and supply chains and to expedite the joint manufacture of defense equipment. As such, the RDP mitigates trade barriers to the mutual procurement of products for export by the signing nations.

Since the late 1980s, the United States has encouraged Korea to join them in signing an RDP. Korea however, has remained steadfast in rejecting this idea. While the Koreans acknowledge there is value in having greater access to U.S. markets, they fear opening their markets to the United States could be problematic. Korea’s limited technology, smaller manufacturers, and product pricing are not on the same level as those in the United States.

In speaking with The Epoch Times, Chae Woo-Seok, President of Korea’s Association of Defense Industry Studies, said the RDP agreement with the United States is important to South Korea as it will send a deterring message to North Korea and China.

He also explained that signing the RDP agreement will provide more economic benefits to South Korea as it enters the world’s largest military market, “Korea would benefit even more.”

Chae explained that many of the high-tech weapons deployed in South Korea remain compatible with U.S. military weapons systems and that U.S. products were chosen with U.S.-South Korean coalition operations in mind in the event of an emergency.

According to Chae, South Korea imports parts from the U.S. for operation and maintenance, but it is expected to supply domestically made parts by replacing them with Korean products or by manufacturing them on order from the United States For example, there is an instance in the Korea-U.S. FTA auto agreement where Korea’s role is expanded over time.

Therefore, after signing an RDP agreement, if necessary, appropriate protective measures can be implemented to protect domestic defense technologies in critical areas.

Chae explained that the Korea-U.S. alliance would be strengthened if South Korea and the United States interconnect their defense industry supply systems. With a Korea-U.S. RDP agreement, South Korea will strengthen its defense and security, and domestic defense companies will improve their operating rates and increase their profits.

Although Korea’s defense industry continues to grow, it still lags in advanced defense technologies to some extent, and trade deficits with the United States are accumulating in the defense sector alone due to the introduction of advanced weapons from the United States. The RDP agreement would help alleviate these problems, and the joint research and development achieved through the agreement will contribute to Korea’s national security and revitalization of the defense industry. The Korea-U.S. RDP agreement is expected to serve as a bridgehead for exports with the U.S. defense industry, Chae said.

An RDP agreement is intended to be a fundamental measure by which South Korea and the United States will be able to resolve issues not only with China but also with North Korea through a stronger Korea-US alliance, Chae added.

According to Chae Woo-Seok, the Korean defense industry’s “greatest competitiveness lies in price/performance ratio and after-sales service.” He expects future export prospects will be “very bright as well.”

Korea and US to Jointly Build Space and Missile Networks

South Korea plans to expand its deployment of Terminal High Altitude Air Defense (THAAD) missiles and is further developing its intermediate precision-guided missiles with a range covering Beijing. Although Beijing is likely to object, Chae believes Korea has the right to take these steps since the CCP has missiles capable of reaching Seoul. He said, “The CCP’s pressure will not impede the defense rights of independent states.”