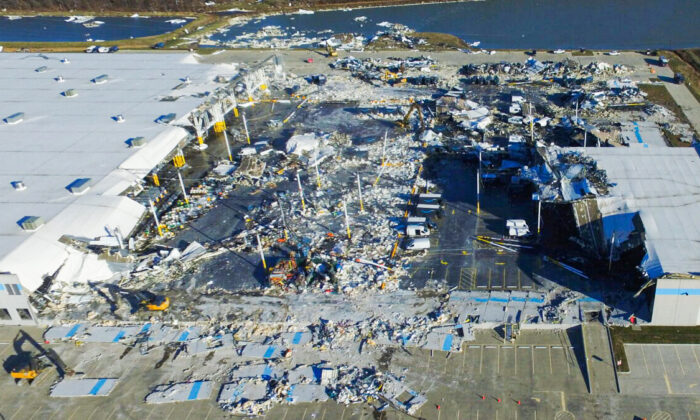 The site of a roof collapse at an Amazon distribution center a day after a series of tornadoes struck multiple states, in Edwardsville, Ill., on Dec. 11, 2021. (Drone Base/Reuters)
US News

Experts have pushed back against claims that deadly tornadoes that swept through Kentucky, Illinois, Missouri, Arkansas, and Tennessee on Dec. 10 and 11 can be clearly linked to manmade climate change.

In an exclusive interview with The Epoch Times, professor and climate economist Richard S.J. Tol of the University of Sussex explained why it’s so difficult to connect weather events on the scale of a tornado to shifts in the Earth’s climate.

“Tornadoes are small, rarely more than 3 kilometers [about 1.9 miles] in diameter. The most advanced climate models, however, cannot see things that are smaller than 9-by-9 km. Climate models can therefore tell us very little about tornadoes,” he said via email.

“Data are not great, but suggest that there is no upward or downward trend in tornado frequency or severity.”

On Dec. 11, President Joe Biden speculated that climate change had “some impact” on the massive storms that have claimed at least 74 lives so far.

“All I know is that the intensity of the weather across the board has some impacts as a consequence of the warming of the planet and climate change,” Biden said, according to reporting from Fox News. “The specific impact on these specific storms, I can’t say at this point.

“The fact is that we all know everything is more intense when the climate is warming. Everything. And obviously it has some impact here, but I can’t give you a quantitative read on that.”

“The rush to attribute the … tornadoes to climate change illustrates perfectly the political distortion of the topic,” Ross McKitrick, climate economist and University of Guelph professor, told The Epoch Times via email in another exclusive interview.

“The IPCC AR6 (Sct 11.7.3) makes no attribution claims between greenhouse gases and tornadoes, and the long term data show no increasing trend in numbers or severity (indeed there is a slight decrease in numbers),” he wrote, referring to the latest Intergovernmental Panel on Climate Change (IPCC) report on the physical science basis for climate change. “Yet, the public has been so primed by politicians and activists to blame extreme weather on greenhouse gases, they hardly blink when someone like President Biden just makes up the connection.”

A Dec. 13 article from The Washington Post claimed that tornadoes have become more frequent in recent decades, citing data from the National Oceanic and Atmospheric Administration (NOAA) that it said illustrates that tornadoes in the United States are becoming more frequent.

University of Colorado environmental science professor Roger Pielke Jr. responded on Twitter to that article by describing a figure from the article as “incredibly misleading,” pointing out that the rollout of Doppler radar systems has increased reporting of very weak tornadoes in more recent years.

Like McKitrick, he noted that the IPCC hasn’t found that tornadoes are clearly linked to climate change.

McKitrick, who recently questioned a key statistical approach used to link greenhouse gases to climate change, wonders why some researchers only ever look at potential downsides of any changes to the Earth’s climate.

“Now, the alarmists are shifting to a claim that while the events are natural, greenhouse gases [make] them worse than they otherwise would be,” he told The Epoch Times. “Aside from the questionable statistical analysis behind such arguments, the big problem is that it’s ambulance chasing.