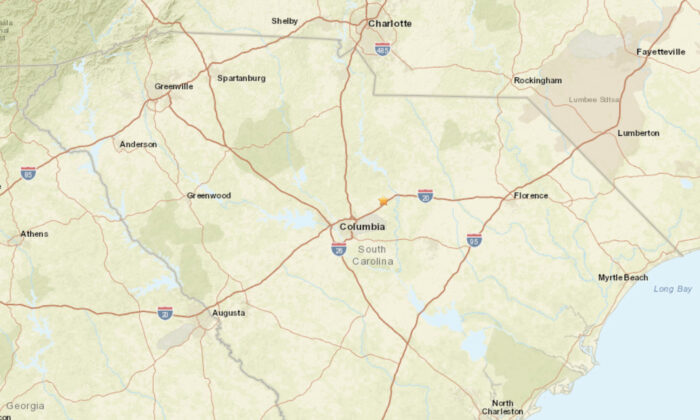 A map showing the location of a magnitude 2.6 earthquake near Elgin, S.C., on Jan. 5, 2021. (USGS/Screenshot via The Epoch Times)
Science

COLUMBIA, S.C.—Yet more earthquakes have struck near South Carolina’s capital city, the ninth and tenth in a series of rumblings that have caused geologists to wonder how long the convulsions might last, or if they could possibly portend future, more serious seismic activity.

Early Wednesday, a 2.6-magnitude earthquake struck near Elgin, about 25 miles northeast of Columbia, according to the U.S. Geological Survey. It was measured at a depth of 0.5 kilometers, officials said. About 7 hours later, another earthquake hit the area, this one with a magnitude of 1.5, according to officials.

That area, a community of fewer than 2,000 residents near the border of Richland and Kershaw counties, has become the epicenter of a spate of recent seismic activity, starting with a 3.3-magnitude earthquake on Dec. 27. That quake clattered glass windows and doors in their frames, sounding like a heavy piece of construction equipment or concrete truck rumbling down the road.

Since then, a total of nine more earthquakes have been recorded nearby, ranging from 1.5 to Wednesday morning’s 2.6 quake. No injuries or damage have been reported.

According to the South Carolina Emergency Management Division, the state typically averages up to 20 quakes each year. Clusters often happen, like six small earthquakes in just more than a week last year near Jenkinsville, about 38 miles west of the most recent group of tremors.

Earthquakes are nothing new to South Carolina, although most tend to happen closer to the coast. According to emergency management officials, about 70 percent of South Carolina earthquakes are located in the Middleton Place-Summerville Seismic Zone, about 12.4 miles northwest of Charleston.

In 1886, that historic coastal city was home to the largest recorded earthquake in the history of the southeastern United States, according to seismic officials. The quake, thought to have had a magnitude of at least 7, left dozens of people dead and destroyed hundreds of buildings.

That event was preceded by a series of smaller tremors over several days, although it was not known that the foreshocks were necessarily leading up to something more catastrophic until after the major quake.

Frustratingly, there’s no way to know if smaller quakes are foreshadowing something more dire, according to Steven Jaume, a College of Charleston geology professor who characterized the foreshocks ahead of Charleston’s 1886 disaster as “rare.”

“You can’t see it coming,” Jaume told The Associated Press on Wednesday. “There isn’t anything obvious moving or changing that you can put your finger on that you can say, ‘This is leading to this.'”

Typically, Jaume said that the recent quakes near Elgin—which lies along a large fault system that extends from Georgia through the Carolinas and into Virginia—would be characterized as aftershocks of the Dec. 27 event, since the subsequent quakes have all been smaller than the first.

But the fact that the events keep popping up more than a week after the initial one, Jaume said, has caused consternation among the experts who study these events.

“They’re not dying away the way we would expect them to,” Jaume said. “What does that mean? I don’t know.”