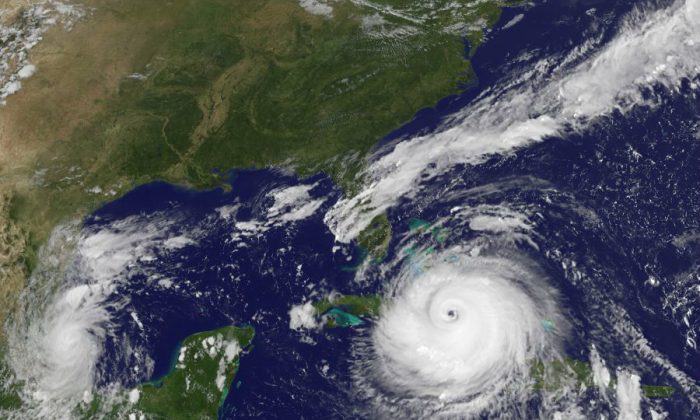 All scenarios that had put Hurricane Irma on a path away from Florida have been eliminated, experts said late on Friday, with the storm virtually guaranteed to make a direct and devastating hit on the state starting Friday night.

“No doubt [about] landfall in Florida anymore, just a matter of exactly where & who gets the worst damage. Hurricane force wind gusts peninsula wide,” said Dave Epstein, a meteorologist with CBS.

“No longer any spread or uncertainty about landfall of Hurricane #Irma … this is happening for sure, unfortunately,” said meteorologist and hurricane expert Ryan Maue.

Parts of Florida could be hit with a crippling combination of storm surges and rainfall. Some areas in the southwest may see waters rise up to 12 feet, according to the U.S. National Hurricane Center (NHC). Meanwhile, parts of Florida may see up to 20 inches of rain, according to a 2 p.m. advisory from NHC.

The level of flooding would depend on a number of factors. In a worst-case scenario, peak storm surge would occur during a high tide, with potentially catastrophic consequences.

Based on the latest advisory from the NHC, Irma was moving west at 14 mph and blowing sustained winds of 155 mph. The storm was more than three times the width of Florida in the latest satellite photos.

The death toll from the havoc the storm wreaked on its path rose to 21 people on Friday. Some islands were virtually flattened, with photos showing extreme devastation.

“We are running out of time. If you are in an evacuation zone, you need to go now. This is a catastrophic storm like our state has never seen,” Florida Gov. Rick Scott said, adding that the storm’s effects would be felt from coast to coast in the state.

President Donald Trump said in a video recorded statement that Irma was “a storm of absolutely historic destructive potential,” and called on people to heed recommendations from government officials and law enforcement.

Mass evacuations are underway in Florida as residents flee the state for safety.

The storm earlier pummeled the Turks and Caicos Islands after saturating the northern edges of the Dominican Republic and Haiti.

Irma was downgraded to a Category 4 on Friday, but remains a giant and extremely dangerous.