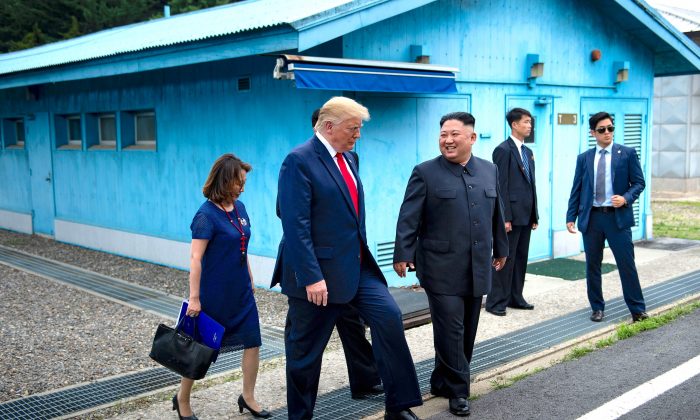 Following his trip to Japan for the G20 Summit, President Donald Trump made history by becoming the first sitting U.S. President to ever set foot inside North Korea. How this event came about is a perfect example of how Trump operates.

After observing Trump for a long time, I’ve learned to take very little he says at face value. People who hang onto his every word as if he literally means everything he says will never understand what he’s doing.

The events in Asia last week are just another great example of this.

First, Trump pretended the entire meeting with Kim at the Korean DMZ was an impromptu thing he just threw out there on Twitter on June 28:

“After some very important meetings, including my meeting with President Xi of China, I will be leaving Japan for South Korea (with President Moon). While there, if Chairman Kim of North Korea sees this, I would meet him at the Border/DMZ just to shake his hand and say Hello(?)!”

Then in a later tweet the following day, Trump revealed his visit to the DMZ had actually been ‘long planned’:

“I am in South Korea now. President Moon and I have “toasted” our new Trade Deal, a far better one for us than that which it replaced. Today I will visit with, and speak to, our Troops – and also go to the the DMZ (long planned). My meeting with President Moon went very well!”

Of course, Kim Jong Un was there for Trump’s visit to the DMZ, and his greeting Trump and inviting him to step into his country, if only briefly, became the big news item of the week.

Despite the amazing historic nature of this meeting at the DMZ, and the fact that the stalled nuclear negotiations with North Korea have now restarted, critics were quick to downplay or even attack what Trump was accomplishing.

Former Obama administration official Roger Fisk appeared on The Hill’s “Rising With Krystal Ball” program where he quickly decried Trump’s historic act as having ‘no substance.’

“Where is the progress other than the photo ops in North Korea?” asked Roger Fisk, who served on President Barack Obama’s 2013 inaugural committee.

“There’s no substance there,” he added. “Every other president … had preconditions before they would even sit down with Kim Jong Un or his father or his father’s father.”

The Joe Biden campaign put out a statement attacking the President for “coddling dictators at the expense of national security,” while fellow Democratic candidate for President Elizabeth Warren wrote on Twitter, “Our President shouldn’t be squandering American influence on photo ops and exchanging love letters with a ruthless dictator. Instead, we should be dealing with North Korea through principled diplomacy that promotes US security, defends our allies, and upholds human rights.”

Hillary Clinton back in February chimed in that any deal Trump managed to get with North Korea would be like ‘putting lipstick on a pig.’

Well, it’s telling that the same people who couldn’t seem to do anything to defuse the growing threat of nuclear war on the Korean peninsula when Obama was in charge are wasting no opportunities to speak up and pontificate that Trump is doing everything wrong when it comes to his diplomacy with North Korea.

It’s hysterically funny that these are the same people who:

Do you really think anybody who watched their ineptitude in action for eight long years eagerly waits to hear their foreign policy hot-takes today?

These so-called “experts” stumbled from one foreign policy disaster into another but the mainstream media still hands them a megaphone to shout their prescriptions for dealing with the current issues that Trump is facing.

Trump got North Korea to make unprecedented moves to start opening up its country and begin reconciliation with South Korea after everyone else failed. How did he accomplish this?

Trump understood and acted on the Asian concept of “face” in a way no previous president has.

You cannot get anywhere with Asian people, in Korea, China, or Japan, without understanding their concept of “face.” Face is the other person’s social standing and is closely linked with a person’s sense of honor, which, if you wish to proceed in any type of negotiation with them, you must guard as carefully as your own. Many Westerners fail to grasp this, since they view negotiations from the standpoint of “I win, you lose.”

Fisk has this all wrong. Previous administrations never got anywhere with North Korea precisely because they were approaching the North Koreans as their inferiors, demanding they come to the table as having a lesser rank than the other side across from them. To the Asian mind, this kind of a setup is unacceptable. It is both insulting and demeaning.

Obama and his team either never understood “face” or dismissed it, which goes a long way in explaining the results they got in dealing with North Korea and China. Offering negotiations with preconditions is saying “I’m in charge here, I am above you, you are inferior to me and you will have to jump through my hoops even to get to the table to negotiate with me.”

Remember when all of a sudden back in 2018 it was revealed that then-CIA Director Mike Pompeo had made a secret trip to North Korea?

Trump found a way to open up North Korea after no one else could because he alone realized he had to find a way to reach out to Kim that allowed him to save face.

It’s still an open question if a deal will ever get done, but what can’t be denied is that Trump’s methods have been far more effective at getting the North Koreans to the table than anything that the “experts” tried in the past.