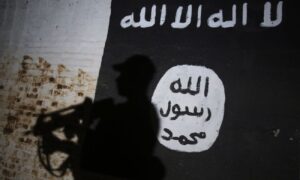 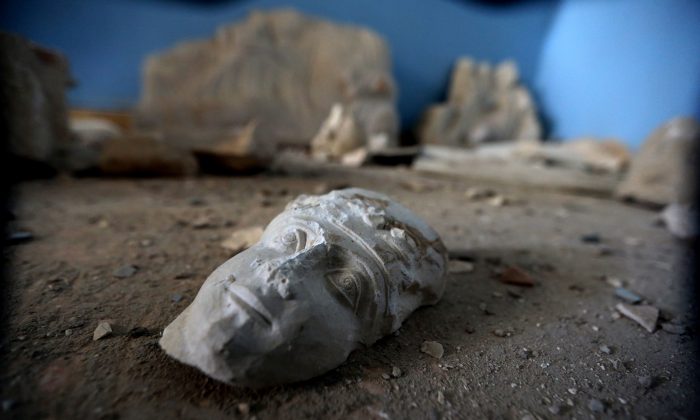 The face of a statue lies on the ground at the destroyed museum in the ancient Syrian city of Palmyra on March 31, 2016. (Joseph Eid/AFP/Getty Images)
Middle East

Experts Give New Details of IS Destruction of Syrian Museum

DAMASCUS, Syria—Experts back from assessing damage at the museum in Palmyra offered grim new details Saturday about the extent of the destruction caused by the Islamic State group during the 10 months it controlled the ancient town.

The museum was trashed and some of its best-known artifacts and statues were smashed by the extremists, who cut off the heads and hands of statues and demolished others before being driven out last month.

Bartosz Markowski, from the Polish Archaeological Center at the University of Warsaw, told The Associated Press in Damascus that most of the 200 objects which were exhibited on the ground floor were destroyed, many of them apparently with hard tools like hammers. Many artifacts have been stolen, he added.

These Photos of Palmyra Before and After ISIS Are Heart Wrenching

He and his colleagues were the first specialists to visit Palmyra after it was taken over by the Syrian army, and spent a week collecting fragments of sculptures and preparing them for transportation to Damascus for conservation in a rescue mission.

“We collected everything we could. The fragments were spread around the whole museum among broken glass and furniture … It is a catastrophe,” he said.

Among the best-known statues destroyed was the famous Lion of Allat, which previously greeted visitors and tourists outside the Palmyra museum. The statue, which used to adorn the temple of Allat, a pre-Islamic goddess in Palmyra, was defaced by IS militants and knocked over by bulldozers.

On a visit to Palmyra on Thursday, The Associated Press saw the statue lying outside the building with its face cut and some of its broken pieces lying next to it.

“Fortunately we collected most of the fragments and I hope it can be reconstructed very soon,” said Markowski, who in 2005 took part in a Polish archaeological mission that did renovation work on the statue.

His colleague, Robert Zukowski, said the lion should be the first thing restored and “it should stay in Palmyra as a sign of resistance against the barbarians. “