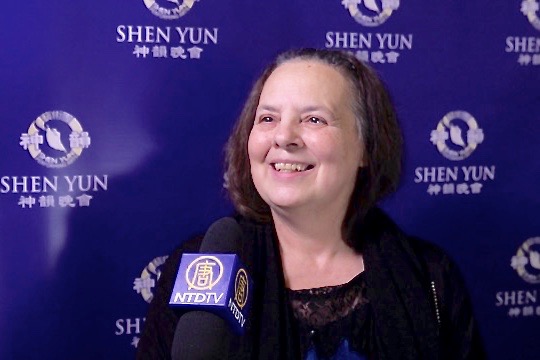 DETROIT—An exuberant Lisa Ramsey brought her critical eye to the performance of Shen Yun Performing Arts, and she just could not find anything negative to say. “It was heaven,” she said, after seeing the performance at the Detroit Opera House on Jan. 2.

The kind of person her family and friends dread bringing to shows because she picks them apart, Ms. Ramsey once performed in theater productions, and has seen productions all over the world. She currently owns a toy dealership with her husband.

“It was breathtaking,” she said about the traditional Chinese music and dance she had just witnessed. “We looked at each other and we couldn’t find words. It was just hard to describe. Just such a wonderful feeling. There’s so many terrible things in the world now, and just for a moment, it was perfect. It was just like how everything should be,” she said.

To call Shen Yun heavenly is an apt description, since the rough translation of the term means “divine beings dancing.”

The New York-based company aims to revive a divinely inspired culture. “For 5,000 years, divine culture flourished in the land of China. Humanity’s treasure was nearly lost, but through breathtaking music and dance, Shen Yun is bringing back this glorious culture,” states the company website.

Ms. Ramsey had been trying to see Shen Yun since 2009. This year, her daughter bought tickets as Christmas gifts for the family.

Bringing her critical acumen to bear, Ms. Ramsey watched the dancers as actors: “I studied a lot of faces, and there were sequences where the dancers would freeze, and I would look at the faces and you could just read so much into [them]. Every performer had a story to tell. They were on, they were in the moment; they were in character.”

There was comedy, there was drama, there was sadness. There were some very touching moments.
— Lisa Ramsey

“There were a few ‘Wow!’ moments where you just didn’t see that movement coming,” she said. “It was just such a delight. There was comedy, there was drama, there was sadness. There were some very touching moments.”

Frankly, Ms. Ramsey felt the performance was refreshing. Rather than finding errors, and thinking, “This was off, that was off, you know. Somebody did this or that,” she instead relaxed and was able to simply enjoy it.

If Ms. Ramsey brought a critical eye to the performance, Jonathan Bayley, associate professor of music of the University of Windsor, came with a critical ear. Mr. Bayley attended with his wife Janet, a data analyst in medical care.

Elsewhere, Mr. Bayley has heard an artificial quality when Eastern and Western instruments have been combined, but here he felt Shen Yun made it work very well. He thought the orchestra and players were very fine.

“The traditional instruments aren’t overpowered by the Western instruments, and yet at the same time it’s a nice blend between the East and the West,” he said.

With regard to the original compositions, he believed they exhibited traditional Chinese music in every sense of the word “harmonically and melodically, and yet at the same time they’re very expressive and musical.”

As well as the orchestra, Shen Yun presents award-winning vocalists who sing original pieces. They apply an authentic bel canto style which originated in Italy, a language with very open vowel sounds. Yet Shen Yun singers perform in Chinese—a most difficult feat.

Mr. Bayley considered the singers to be quite dramatic and expressive, and he clearly heard the traditional Chinese flavor, yet with a Western vocal technique. “A healthy mixture between the two.”

Eve Jaehnen, a nurse practitioner who was also in the audience Saturday evening, brought her own expertise to the performance. She studied ballet for 15 years.

She commented on the beautiful hand gestures of the female dancers. “It’s not just the arms or the legs,” she said, implying that ballet concentrates on the arms and legs primarily, but that they all have the same hand movements.

She also noticed that the dance entailed use of costume and props which helped lend a Chinese feeling to the dance.

Shen Yun’s music, theater and dance have a purpose behind their artistry: To revive the cherished values from ancient China’s divinely inspired culture.

Ms. Ramsey shared what she took away from the evening: “We go through a lot in our individual life journey and at the end of it all, ideally, you want to look back and say it was hard, it was good, it was bad, but at the end of it all, things are as they should be. And that’s how I would like to believe things end. And that’s what I took away with the show … Good prevailed, and that’s what I like to believe … the message is. In spite of our struggles and in spite of everything we go through, after it’s all said and done, things are as they should be.”