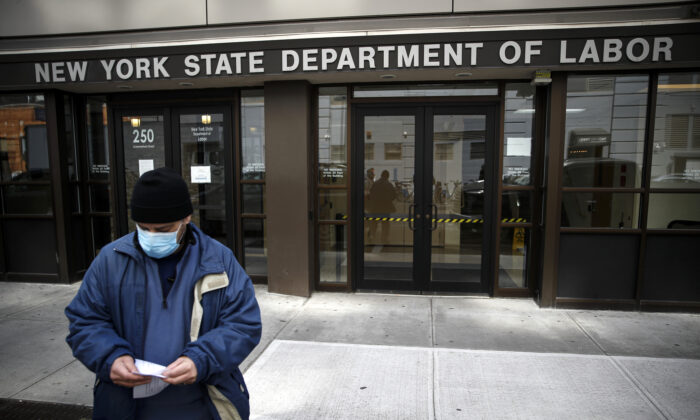 Visitors to the New York State Department of Labor are turned away at the door by personnel due to closures over CCP virus concerns in New York on March 18, 2020. (John Minchillo/AP Photo)
CCP Virus

Experts Assess How US Economy May Be Safely Reopened

As the surge in daily new COVID-19 cases begins to decrease and the workload at hospitals begins to ease, confidence among Americans toward reopening the U.S. economy is growing.

Experts, however, say that safely reopening the U.S. economy isn’t a simple or straightforward task, and that planning for that should start immediately.

“The best time to reopen will vary not just by state, but even by city. Our nation spans the entire continent and includes thousands of counties and tens of thousands of municipalities with a wide range of demographics, health care facilities, and population densities,” said Joel Griffith, a research fellow specializing in financial regulations at The Heritage Foundation, in an email to The Epoch Times.

The governors of seven states, including New York, New Jersey, Connecticut, Rhode Island, Delaware, Pennsylvania, and Massachusetts all connected by phone on April 13 to create a multi-state partnership that will examine the possibilities of reopening the economy.

The six Democrats and one Republican governor (Massachusetts) plan to create a task force that will study how to safely restart business and allow people to get back to work.

Businesses that have a limited risk of contributing to the pandemic, such as manufacturing, retail stores, salons, golf courses, restaurants, and auto centers, will likely be the first to reopen, Griffith said.

“Meanwhile, theaters, sporting events, music venues, nightclubs, and cruises—those with more propensity to bring large numbers of people into close contact with each other—may be more slow to reopen,” he said.

The reopening will depend upon how the public health system manages the crisis, Alan Sager, an expert in public health care systems at the Boston University School of Public Health, told The Epoch Times in an email.

“Ending the restraints will not be an all-or-nothing matter. I do think that relaxing the stay-at-home and distancing requirement will be gradual. Otherwise, the virus will come back with a vengeance and may wreak inconceivable havoc—death, illness, and durable economic destruction,” Sager said.

He added that bringing down the numbers of new cases to very low levels would be the first step toward encouraging officials to ease restraints.

“More thorough, quick, and accurate testing” will generate confidence in the low number of new cases, and relentless contact tracing is a must for any infectious disease, Sager said.

“Contact tracing is very labor-intensive and requires a great deal of time, so it can only work when the number of new cases is low enough to allow careful tracing,” he said.

While most of the world is under complete or partial lockdown due to the pandemic, big tech and public health have already been working on developing contact tracing technology.

Google and Apple announced a joint effort April 10 to develop a Bluetooth-based contact tracking technology to assist government and public health authorities in reducing the spread of the pandemic, according to a statement.

Next to contact tracing, another important step that can help curtail the virus, Sager says, is mandatory 14-day stay-at-home self-quarantining by those who’ve been in contact with an infected person.

Sager said when the two steps of “relentless contact tracing” and the self-quarantining are done, people will be able to gradually get back to work while still minding safety precautions.

“People who have recovered from the virus, and have the antibodies in their blood to prove it, will be among those who are first able to return to work, since they can’t get sick and won’t do much to spread the virus if they keep their hands clean,” Sager said.

However, he said the reopening of public places will likely take longer.

“Reopening social venues like restaurants, bars, movies, sporting events, social gatherings, and even religious meetings may have to be delayed until we can measure the effects of the more essential returns to work on new cases,” Sager said.

He noted that states have the legal and practical authority to plan and decide about testing, self-quarantining, contact tracing, and when to allow people back to work.

“So, states will make most of the key decisions, and they may allow different approaches in cities versus rural areas, for example,” he said.

As the country is being reopened, the administration should provide economic help to the business and the unemployed, Griffith said.

“Aid to businesses and the unemployed can temporarily help stave off economic pain. However, a return to the economic prosperity which we enjoyed prior to this pandemic requires allowing the emergency interventions into the U.S. economy to expire once the pandemic is defeated (such as enormous new federal spending and massive Federal Reserve interventions),” he said.

Officials must exercise caution because what they do during the pandemic situation today will determine the freedom the public enjoys later on, Sager said.

“Only when the spread of the virus is tamed can we return to business as usual. The more competent our actions today, the more freedom we will enjoy tomorrow,” said Sager, who added that decisions should be based on “hard-headed medical evidence.”