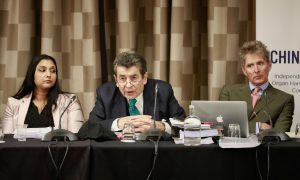 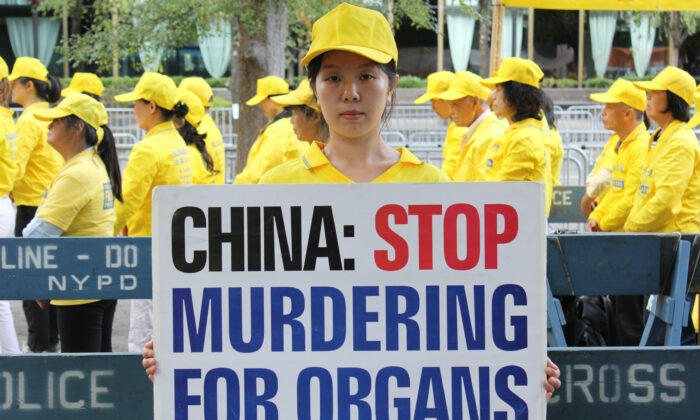 NEW YORK—The United Nations, during events in Geneva and New York this week, is being urged to investigate the Chinese regime for killing prisoners of conscience for their organs.

Addressing the U.N. Human Rights Council in Geneva on Sept. 24, London-based lawyer Hamid Sabi presented findings from a report released in June by the China Tribunal, an international panel of lawyers and experts convened to investigate claims that the Chinese regime has been forcibly extracting prisoners’ organs for transplant.

After a yearlong inquiry, the independent tribunal chaired by Sir Geoffrey Nice QC concluded beyond a reasonable doubt that forced organ harvesting has taken place in China “for a substantial period of time involving a very substantial number of victims.” Nice previously led the prosecution of former Yugoslavian President Slobodan Milosevic at the International Criminal Tribunal.

“Forced organ harvesting from prisoners of conscience … has been committed for years throughout China on a significant scale, and it continues today,” said Sabi, who was special counsel to the China Tribunal.

The harvesting has involved “hundreds of thousands of victims,” mainly Falun Gong adherents, he said, adding that Uyghur Muslims are also targeted.

Falun Gong, also known as Falun Dafa, is a spiritual discipline with meditative exercises and moral teachings. It enjoyed significant popularity in China in the 1990s, with around 70 million to 100 million people practicing by the end of that decade, according to official estimates cited by media at the time. Deeming Falun Gong to be a threat to its control, the Chinese Communist Party banned the practice in July 1999, unleashing the entire state apparatus to persecute its adherents.

At any one time, hundreds of thousands of adherents are held in prisons, labor camps, and brainwashing centers, where many have been tortured in an effort to force them to renounce their faith, according to estimates by the Falun Dafa Information Center.

“Victim for victim and death for death, cutting out the hearts and other organs from living, blameless, harmless, peaceable people constitutes one of the worst mass atrocities of this century,” Sabi said.

At an event held at the Harvard Club in New York on Sept. 25, on the sidelines of the U.N. General Assembly, two women accused the Chinese regime of killing their fathers, who were both Falun Gong practitioners, for their organs. Both men died suddenly while incarcerated at Chinese detention facilities for their beliefs.

Han Yu, of New York, described how her father, Han Junqing, died at a detention center near Beijing in 2004, only two months after he entered the facility. She said her father was very healthy before his detention.

After Han Junqing’s death, the police didn’t allow Han Yu and her family to see his body, and conducted an autopsy without the family’s consent. The report claimed that Junqing died of a heart attack.

More than a month after her father’s death, police finally allowed Han Yu and her family to see the body.

“When I saw my father’s body, I still couldn’t believe that it was real. My father was lying there with countless scars,” she said.

She noticed an incision along his throat that extended into the area inside his shirt. When she proceeded to open the top buttons of his shirt to take a closer look, she was stopped by police, who immediately forced her out of the room.

But her uncle, who examined the body after her, managed to open up his clothes when police weren’t looking.

“They [the uncle and other relatives] found that the incision was all the way from the throat to the abdomen,” Han Yu said. “When they pressed the abdomen, they found [it] was stuffed with hard ice.”

When her uncle questioned the police about that, they were told that it was due to the autopsy.

Torsten Trey, a doctor and director of the advocacy group Doctors Against Forced Organ Harvesting (DAFOH), which co-hosted the event, told The Epoch Times that the Han family’s experiences showed that authorities were trying to hide something.

Given that no one in the family had given permission to remove Han Jinqing’s organs, they must have been illegally extracted, he added.

The Hans’ story provides but a small piece of evidence that the grisly practice is occurring on an “industrial scale” in China, Trey said.

The extremely short wait times for organ transplants in China—in some cases, as little as two days—was a strong indicator that the Chinese regime has access to a pool of organs outside of its official organ donation program, Torsten said. Beijing has maintained since 2015 that organ transplants have come from voluntary donors.

“An organ donation program doesn’t deliver organs on demand, organs with this speed,” he said.

Trey says the killing of imprisoned Falun Gong practitioners for their organs amounts to genocide under international law.

“The victims are specifically targeted as an organ source, not just to provide organs, but also to contribute to the eradication of this group of people,” he said.

“There is a specific intent to eradicate this group of people.”

Trey said Falun Gong practitioners who survived incarceration have reported that authorities have given them blood tests and medical exams, consistent with testing for organ status, while other inmates haven’t faced those tests.

While the China Tribunal found that the Chinese regime’s actions were “indicative” of genocide, it stopped short of declaring whether the crime had been committed. It did, however, say that the U.N. and international courts have a duty to “test whether genocide has been committed.”

Trey called on the U.N. to investigate organ harvesting, as well as the possible genocide being committed by the Chinese regime.

He said 13 years have passed since the practice first came to light, during which it has intensified and become worse, due in part to inaction of the international community.

“There’s no time to lose,” he said. “Definitive actions from the international community are needed.”