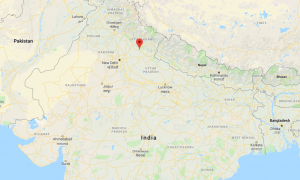 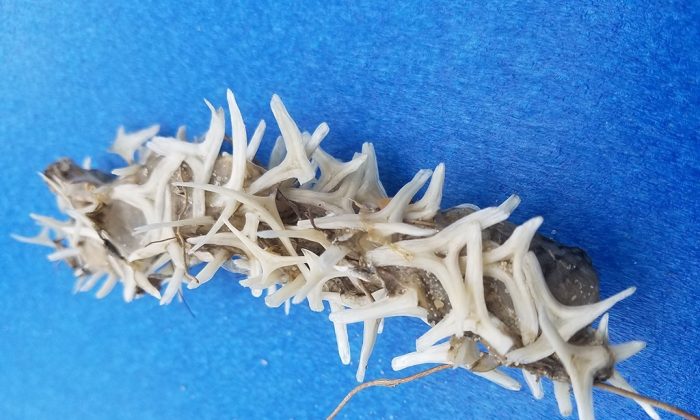 A National Park Service is asking people for help to identify a strange spiny object that washed up on a beach in North Carolina over the weekend.

Staff at the Cape Lookout National Seashore said on June 1 that the object was found by a visitor on the eastern end of Shackleford Banks on the ocean side.

“So far, we’re stumped as to what it might be,” the park wrote. “[I]t might be a plumed worm case which was created using the white, bony structures as part of the case.”

But they added that they had no clue what the bony structures might be.

While some people on social media agreed that it may be a plumed worm case, others have shared their thoughts on what the mysterious creature might be.

“I agree that it is a tube worm (polychaete) that has attached some artwork to its case for camouflage. Depending on the scale (hard to tell what size it is), they could be spicules from a sea star (echinoderm), calcareous sponge, or maybe a fish, but my money would be on sponge or echinoderm. These 3 point spicules are very common with them,” one person guessed.

“I know what this is… I have one and I didn’t know what it was either until I ran across another one on the beach decaying. [It] is the remains of a puffer fish,” another person claimed.

Meanwhile, some commenters decided to think outside the box.

The park later said, “the consensus (outside of the “alien” theory) seems to be leaning towards spines from a burrfish or other puffer on a worm tube,” while replying to a person’s comment.

Also over the weekend, the park said a mysterious jellyfish-like creature washed up onto another North Carolina beach. The park was able to identify it right away, educating the public that it was a Portuguese man-of-war (Physalia physalis), which is a colony of individual organisms working as one.

“These creatures are propelled by winds and ocean currents alone and rise up to six inches above the water line resembling an 18th-century Portuguese warship under full sail. Beachcombers beware—even dead ones washed up on shore can still deliver a sting!” the park wrote.

In a similar case, a fisherman who was on a tourist fishing excursion near the Los Cabos coast of Mexico caught a swollen pink creature about three years ago.

The fisherman Jaime Rendon, who was the captain of the tourist fishing boat, said at the time he was with a client from Chicago about a mile offshore in 370 feet of water. After his client threw the line into the water with a chunk of skipjack, they ended up pulling up the weird creature four minutes later.

“I was really surprised but what caused most impact were the eyes, so strange,” Rendon said in a Facebook post.

The captain said that although the creature looked like an alien, he guessed it was probably a shark because “it had raspy skin, three rows of tiny teeth and three-gill slits on each side of the head (most sharks have 5-7 each side).”

The captain and his client eventually released the creature back into the water after they took photos of it.