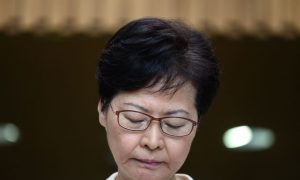 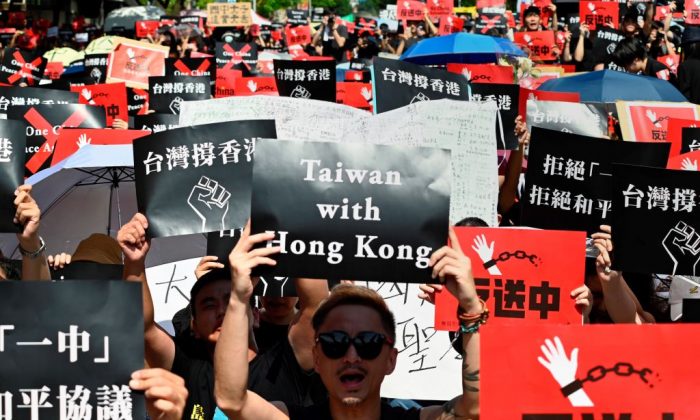 Experts at Washington Hearing: US Should Protect Hong Kong and Taiwan Against Chinese Influence

Since the start of mass protests in Hong Kong against a controversial extradition bill, many Taiwanese have expressed support for the protesters challenging the Chinese regime’s encroaching influence over the city.

At a hearing held by the Congress-appointed U.S.–China Economic and Security Review Commission on Sept. 4, experts said the United States has much interest in protecting the two Asian neighbors.

“The perceived parallels between Hong Kong and Taiwan are growing. Many Hongkongers see democratic Taiwan as a model for their future. And many Taiwanese fear that they are doomed to resemble today’s Hong Kong,” said Syaru Shirley Lin, a lecturer at the University of Virginia and adjunct associate professor at the Chinese University of Hong Kong.

Protests in Hong Kong are now in their fourth month after millions took to the streets in June against an extradition bill that they fear would erode the city’s autonomy that was guaranteed under the city’s “one country, two systems” model after it reverted from British to Chinese rule in 1997.

The bill would have allowed the Chinese regime to transfer individuals to be trialed in courts controlled by the Chinese Communist Party—notorious for lacking rule of law.

Continued protests have pressured Hong Kong leader Carrie Lam to announce the bill’s formal withdrawal on Sept. 4. However, there is no sign of the protests slowing down, as protesters say that Lam has failed to address their other four demands—particularly the establishment of an independent commission to investigate police use of force against protesters.

In the self-ruled island of Taiwan, there is widespread opposition to Beijing’s proposal that it could be united with mainland China under the same “one country, two systems” model—an idea suggested by Chinese leader Xi Jinping in January. The Chinese regime considers the island its own territory despite it being a de-facto independent country with its own democratically-elected government, currency, and military.

Joshua Wong, the iconic leader of the 2014 pro-democracy Umbrella Movement and the secretary-general of the Demosisto political party in Hong Kong, recently concluded a three-day trip to Taiwan. While seeking Taiwanese citizens and officials’ support for the protests, Wong told local media that he hoped one day that Hong Kong could hold democratic elections just like in Taiwan.

Currently, Hong Kong’s chief executive, the position now held by Lam, is voted in by an electoral committee comprised mostly of pro-Beijing elites.

The protests are also having a political after-effect on Taiwan’s upcoming presidential and legislative elections in January 2020, said Bonnie S. Glaser, director of the China Power Project at the U.S.-based think tank Center for Strategic and International Studies.

“If the protests continue, anxiety in Taiwan will persist, and that could play to the advantage of [Taiwan President] Tsai Ing-wen and the DPP,” Glaser said.

Tsai is running for her second term in office representing the Democratic Progressive Party (DPP), which traditionally advocates for the island to formally declare independence from the mainland, in contrast to its main opposition, the Kuomintang (KMT), which leans pro-Beijing.

Meanwhile, Tsai has repeatedly voiced her support for the Hong Kong protesters. In June, she tweeted: “We stand with all freedom-loving people of #HongKong. In their faces, we see the longing for freedom, & are reminded that #Taiwan’s hard-earned democracy must be guarded & renewed by every generation.”

Most recently on Sept. 3, Tsai said that the Taiwanese government would assist Hongkongers seeking refuge on the island on humanitarian grounds.

Glaser added that Beijing’s response to the Hong Kong protests would also have a great impact on the political scene in Taiwan. “In the event that Beijing decides it must send in paramilitary forces or even worse—the People’s Liberation Army [official name of China’s military]—to suppress the protests in [Hong Kong], the impact on Taiwan’s politics would likely be deep and enduring, including the adoption of a more cautious posture toward China by the KMT.”

Lin explained that the United States must respond to both Hong Kong and Taiwan, the former whose autonomy is “being dilated every day,” and the latter’s democracy is being “undermined” by Chinese election meddling efforts. She urged the United States to closely monitor the situation in both regions.

Glaser urged the Trump administration to bolster U.S. economic ties with Taiwan since the latter’s economic prosperity is an “inextricable component of its national security.” She suggested that the United States could sign a free trade agreement with Taiwan, as well as encourage U.S. allies to negotiate economic agreements with the island.

She also called on the U.S. Congress to pass the Countering the Chinese Government and Communist Party’s Political Influence Operations Act (S.480), which calls for U.S. authorities to issue a report on “China’s disinformation, press manipulation, economic coercion, and influence operations in the United States and certain allies and partners who are impacted by China’s influence operations”; and the Taiwan Assurance Act of 2019, which reaffirms the U.S. commitment to selling arms to Taiwan for its self-defense under the Taiwan Relations Act.

The United States, after severing official diplomatic ties with Taiwan in recognition of Beijing in 1979, has maintained a non-diplomatic relationship with the island based on the Taiwan Relations Act.

The House passed its version of the Taiwan Assurance Act (H.R.2002) in May, while the Senate bill has been referred to the foreign affairs committee (S.878).