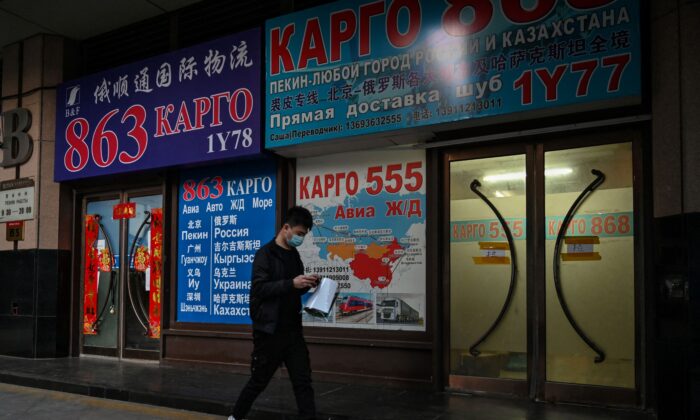 A man walks past a store advertising cargo shipping to Russia and other countries, in Beijing on March 4, 2022. (Hector Retamal/AFP via Getty Images)
Chinese Regime

Russian goods on Chinese e-commerce platforms have recently been sold out after a flurry of buying by Chinese netizens, so much so that a Russian delegate personally came forward to call on them to consume rationally. Analysts believe that this approach will not help the economy of Russia amid Western sanctions.

Recently, many Chinese netizens went to the “Russia National Pavilion,” the only e-commerce platform authorized by the Russian Embassy in China, and emptied the store of various snacks and teas. Popular products were even displayed as “pre-sale products,” and the number of “fans” in the store skyrocketed, increasing by more than 200,000 people on March 2 alone.

On the same day, a thank-you video appeared on the front page of the Russia State Pavilion. Sergei Betsev, business ambassador of the Russian Federation Chamber of Commerce to China, said that at this difficult time, he would like to thank the “Chinese friends” for their support of Russia and the Russian State Pavilion, and that he “will remember this deep friendship.” At the same time, he also called on Chinese netizens to consume rationally.

In an interview with the Epoch Times on March 7, Lu Tianming, a U.S.-based China expert and current affairs commentator, stated that the phenomenon of buying Russian goods in China is due to the Chinese Communist Party’s (CCP) intentional promotion and guidance behind the scenes.

“In China, this type of phenomenon is not spontaneous, like the ‘anti-Japanese tide’ that occurred in the past, which seemed to be a non-governmental act, but was later confirmed to be manipulated and promoted by the CCP. This time it is no different,” he said.

Lu also expressed that on the other hand, the CCP’s long-term lies and propaganda have made many Chinese have a Russian complex, and they do not know that Russia occupies the most Chinese land in modern history. Under the CCP’s so-called “Sino-Russian Friendship” propaganda, many people have been misled to have pro-Russian and anti-American sentiments.

After Russia launched its invasion of Ukraine, the Chinese regime has so far been reluctant to recognize Russia’s actions as an invasion and has refused to impose sanctions on Russia.

On March 2, Guo Shuqing, chairman of the China Banking and Insurance Regulatory Commission (CBIRC), claimed that the CCP would not introduce sanctions against Russia, especially not in favor of unilateral sanctions, and would continue to maintain normal economic, trade, and financial exchanges with relevant parties in Russia.

Limited Help to the Russian Economy

Lu believes that the Chinese people mass buying Russian goods will not contribute much to Russia’s already sanctioned economy.

“It looks like it’s just a Russian specialty store, and a lot of it is out of stock. It’s nothing more than food, snacks, vodka, and other things, and their value is very limited,” he said. “It’s impossible to expect that this will do much to support the economy, but it creates a sense of public opinion and creates the illusion that Chinese are supporting Russia.”

“Another more important point is that it is covering up the CCP’s support for Russia behind its back so that what the international community sees is that it seems the Chinese people are spontaneously supporting Russia, buying its goods and sending it money.”

Lu said that what actually played an important role were the 15 contracts signed by Russian President Vladimir Putin in Beijing during the Winter Olympics, the most important being commodities such as oil and natural gas, as well as Chinese imports of grain, fertilizers, and other materials from Russia.

Russia’s Trade with Countries Around the World

After the start of the war between Russia and Ukraine, the West imposed economic sanctions on Russia, including restrictions on the Russian central bank and the removal of some Russian banks from the Society for Worldwide Interbank Financial Telecommunication (SWIFT). These measures have devalued Russia’s currency, the ruble, and will also make it more difficult to pay for and transport goods.

U.S. business news website Quartz said in a March 2 article that the United Kingdom buys more gemstones and metals from Russia than any other country, mainly gold and platinum.

Turkey is the largest buyer of Russian steel; 40 percent of semi-finished iron and unalloyed steel products in Taiwan are imported from Russia; Belarus and Kazakhstan are also major importers of Russian steel.

Russian timber is the main source of China’s timber imports, accounting for a total of about 37 percent.

Brazil is the largest importer of Russian fertilizers, both mineral and chemical, which account for 69 percent of Brazil’s fertilizer imports.

Russia’s aluminum exports surged in July 2021 after Russian authorities lifted export tariffs. But the recent intensification of the Russia-Ukraine conflict has sparked concerns over global supply shortages, and aluminum prices on the London Metal Exchange have soared.

Grain products such as wheat and barley account for the majority of Russia’s grain exports, and Russia accounts for nearly 30 percent of global export of such grains. Chicago Wheat Futures, the international benchmark for wheat, has risen more than 50 percent since the start of the Russia-Ukraine war.

Turkey and Egypt are the biggest buyers of Russian grain, and Lebanon has reduced its dependence on Russia’s grain and replaced it with Ukrainian products.

The sharp rise in wheat prices has weakened the wheat-buying capacity of food-importing countries. Turkey, as one of the main buyers of Russian wheat, was forced to reduce its initial target volume in an international tender.

Russia and Ukraine produce about 19 percent of the global barley production and 32 percent of exports; Russia ranks 6th in the world in terms of corn exports, accounting for 2.3 percent .