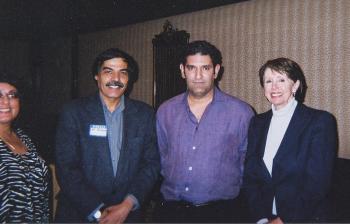 Exiles in US Charting New Course in Libya

By Pamela Tsai
Print
A university lecturer, a high-tech entrepreneur, an award-winning tour operator—what do they have in common besides living in Seattle, Washington? They are Arab Americans playing important roles in one of today’s biggest international stories in North Africa.

Rita Zawaideh, owner of Seattle’s award-winning travel company, Caravan-Serai Tours, Inc., serves as a tour guide to not only the culture, history, and sights in the Middle East, but also to behind-the-scene stories and insights about Libya.

“We’ve worked together for over 30 years on this,” Zawaideh said. She added that she and her friends have been trying to free Libya for decades.

A founding member and chairperson of the Arab American Coalition Committee, an Arab American civil-rights organization, Zawaideh emigrated to the U.S. at an early age and obtained a master’s degree in Arabic studies from the University of Washington. A frequent speaker on issues related to the Middle East and North Africa, she was presented the 2007 Farhat J. Ziadeh Leadership Award. The award is in honor of University of Washington professor emeritus Farhat J. Ziadeh.

Asked to describe Ali Tarhouni, her long-time colleague whom The Epoch Times was unable to reach for an interview, Zawaideh said “He is a gentleman, not pretentious, always works in the background, shy at taking credit for what he does, at the same time forceful in what he believes.”

Zawaideh said Tarhouni left Seattle in early March and flew into Cairo en route to Libya “There were people, a car, and paperwork waiting for him at Cairo to get him across the border and into Benghazi. He has been banned from the country for 30 years and his name is on the border checkpoints everywhere in Libya. This is his first time to go back to Libya since he left 30 years ago.”

The only way for Tarhouni to see his family living in Libya is that they all fly to Cairo or Tunisia and meet there.”

Zawaideh said, “It must be a very emotional journey for him, but he doesn’t have time to feel the emotions. He has a lot of things to do in front of him. He’s been working against Gadhafi for over 30 years.”

Zawaideh told a story about the professor turned finance minister when he was a university student in Benghazi.

It was at a graduation ceremony at which Gadhafi was supposed to give a speech. Tarhouni went up to the podium, pointed to Colonel Gadhafi, and said to the students “I’d like to introduce you to our latest dictator.” According to Zawaideh, Tarhouni left the country for the U.S. shortly after that. He was blacklisted by the Gadhafi government.