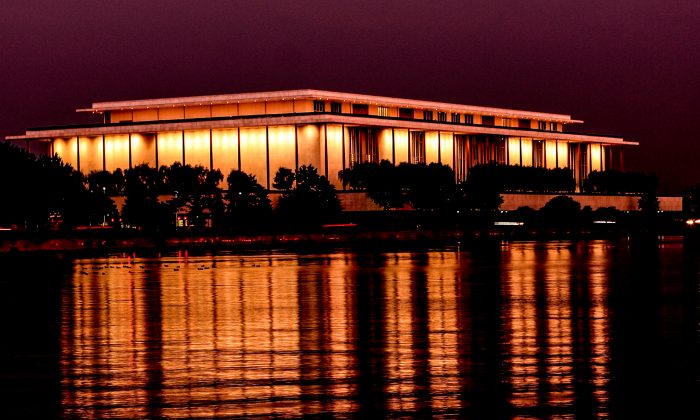 WASHINGTON—“Grace, precision, culture, and execution.” Those were the words Michael Mahoney used to describe Shen Yun after he attended the performance with his wife at the Kennedy Center Opera House in Washington, Jan. 25.

Mr. Mahoney, executive director in charge of space operations at his company, admired Shen Yun’s portrayal of stories through classical Chinese dance and music, a language understood by everyone.

“That’s what I see—the common thread of music, a way of communication,” Mr. Mahoney said.

Based in New York, Shen Yun Performing Arts brings to life 5,000 years of authentic Chinese culture for audiences all over the world.

“It’s the right story to tell. We appreciate it very much and it’s wonderful,” Mr. Mahoney said during intermission. “We are very glad that we are attending.”

Many of the dances in Shen Yun tell stories from China’s rich history as well as modern China. One that stood out to Mr. Mahoney was The Steadfast Lotus, about a mother and daughter who are persecuted by the communist regime for practicing the meditation discipline Falun Gong.

“In a plot that mirrors countless present-day stories of Chinese families torn apart, the daughter endures tribulations searching for her mother, until her steadfast faith gives her newfound hope,” reads Shen Yun’s program.

“To me, it conveys the true culture, spirituality, and compassion,” Mr. Mahoney said of the dance. “And it really just leaps out to me and I enjoyed that.”

“The one thing that keeps coming through is how much we are alike,” he added. “The song, the hope, the tragedy, and we should look at what brings us close together rather than what separates us.”

In each Shen Yun performance, world-class dancers create a visually dazzling display of choreography and colorful handmade costumes, accompanied by an orchestra that combines Eastern and Western musical traditions.

“The choreography, the grace, obviously the costumes,” Mr. Mahoney said. “We really enjoyed seeing that. That’s what is so wonderful about it.”

“It’s just spectacular!” Ms. Mahoney said of the performance. “The music and the dancing, the scarves are so beautiful. Everything is just exquisite.”