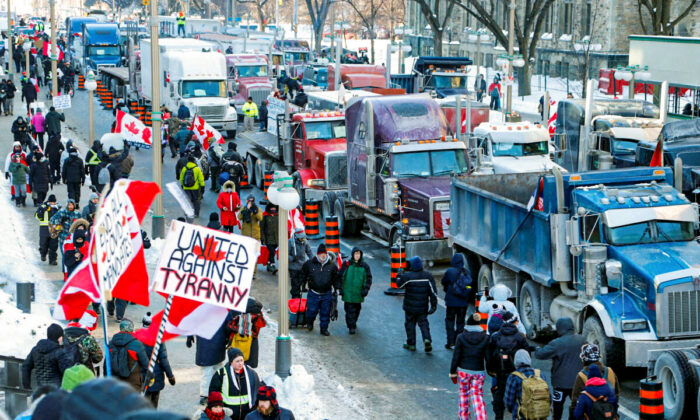 Trucks are parked on Wellington Street near the Parliament Buildings as truckers and supporters protest against COVID-19 mandates in Ottawa on Jan. 29, 2022. (Patrick Doyle/Reuters)
Constitutional Rights

A trucker-led convoy will kick off on Feb. 23 from the Barstow area in California, and head eastbound toward the capital of the constitutional republic—Washington D.C.—to peacefully protest to end the federal government’s emergency powers (pdf) declared since March 2020 in response to the COVID-19 pandemic and restore freedoms protected by the Constitution.

Barstow is a city about 100 miles from Los Angeles where truckers often converge since it’s a major crossroads.

The large convoy goes by the name “The People’s Convoy” and will be non-partisan and cross-cultural in nature.

At the start of the convoy, an estimated 500 to 1,000 trucks will gather and depart eastward for Kingman, Arizona. The next morning, they will depart from that location and head east on Interstate 40 toward Lupton, Arizona. On Feb. 25, they plan to arrive at Glenrio, Texas.

The exact locations have not yet been specified due to the need to maintain operational security and to leave time to coordinate with local municipalities.

More details on the routes will be released two or three days in advance “as safety dictates, but you can expect us to travel along I-40 and work our way up towards D.C.,” Brian Brase, one of the core truckers that are organizing The People’s Convoy, told The Epoch Times.

Brase has been involved with various protests against over-regulation in the trucking industry for five years already.

Multiple groups will be joining the convoy as they drive toward the capital.

“It [doesn’t] matter what you drive, bring the golf carts, bring the mopeds, bring everybody, this is for everyone,” he added. “It’s the people’s convoy! It’s for the people.”

Brase said that official updates will be posted on thepeoplesconvoy.org, as well as their Facebook page and their Gettr page.

After seeing the problems the Canadian convoy had with their GoFundMe page, they set up three different means to receive donations via credit card, PayPal, or cryptocurrency. The donations are being handled through the nonprofit American Foundation for Civil Liberties & Freedom which is being supported through private banking as well as accountants and lawyers that will track the donations and place them accordingly.

Some of their plans are still being held “pretty close to the chest,” but the organizers will be issuing updates as the event takes shape.

Another goal of the movement is to hold officials accountable for the actions they took in the name of public health during the pandemic. Brase explained they would like to see “congressional hearings, as to several things: why the actions were taken that were taken, what science did they use to [back up] their actions.”

Brase said they are calling for “Senate hearings and things like judicial hearings through the Senate and the House, to get to the bottom of the source of the COVID-19 pandemic, how it started, where it started exactly, and who’s responsible for the steps of [the] mandates and shutting down people that have scientific facts that contradict what the CDC or the World Health Organization has said.”

Dr. Ryan Cole, founder of Cole Diagnostics, has voiced his support publicly for the convoy to Washington.

“A team of 17,000 doctors is standing in support of us. We’re excited to see that,” Brase said, “the white coat standing with the blue-collar,” referring to a petition to review the COVID-19 narrative signed by over 17,000 doctors, led by Dr. Robert Malone.

The truckers have security protocols still under development, as well as a code of conduct for participants, which will be uploaded to their website in the upcoming days. They also have contingency plans in the event that they are blocked along the way.

Brase believes that there are already troublemakers trying to infiltrate the convoy.

“The bottom line here is we’re not doing anything illegal. We’re standing up for our rights. We are Americans and we have the right to assemble. And we’re doing a march. It’s no different than any of the peaceful marches that have happened over the generations of the United States’s history,” Brase said.

“We’ve been doing everything that we can to promote a peaceful environment. We’re not out to overthrow the government or change election results … We’re not that. We’re here simply to be respected as Americans that want our Constitution of the United States respected, that’s what we want.”

They want the emergency powers act activated in response to the CCP (Chinese Communist Party) virus to be nullified, because otherwise, even if mandates are lifted, they can easily be reinstated.

“If we can stop [the emergency powers], they have to fight to get that act back in place, and at that point, everybody will be prepared to stand up and fight that act coming back into place.”

Human rights attorney Leigh Dundas is working as a clearinghouse for information in order to effectuate the goals of the convoy in a “100 percent peaceful, law-abiding,” and “successful” way.

Dundas told The Epoch Times that the goal of the protest is to handle the situation at “the root level.”

“The message is really that the abuse of emergency powers that we’ve seen multiple states and the feds engaged in over the last almost two years has to stop. The state of emergency needs to end, there is no emergency anymore,” Dundas said.

“Because to just end a mandate here and a mandate there, we’re just playing whack a mole and we’re not getting to the root cause of the problem, which is the emergency powers that were triggered back in March of 2020. So those need to come to an end and we need to return to a state of normalcy. We need to restore freedom and accountability for any actors that were not behaving well at the governmental level.”

She said they’re not expecting police blockades along the way.

“We’re not expecting these states to blockade us because it would create a bit of a traffic jam for the state and we’re expecting to work with local and state jurisdictions to ensure the seamless flow of traffic as we proceed through the U.S.”

The convoy was inspired by the Freedom Convoy 2022 that began in Canada after the country’s Public Health Agency announced that only fully vaccinated truck drivers can cross the U.S.–Canada border starting Jan. 15, and the U.S. Occupational Safety and Health Administration (OSHA) announced similar requirements starting Jan. 22 for non-U.S. national truckers crossing into the United States.

Thousands of truckers decided to protest, with many staying in the capital of Canada, blaring horns, and engaging in celebrations of freedom. Five Canadian provinces, including Alberta, Saskatchewan, Manitoba, Ontario, and Quebec, have lifted or announced plans to remove their COVID-19 vaccination mandates, while others have eased some of their COVID-19-related restrictions. Premiers of Ontario and Quebec insist that the easing of the restrictions in their provinces is not related to the protests.