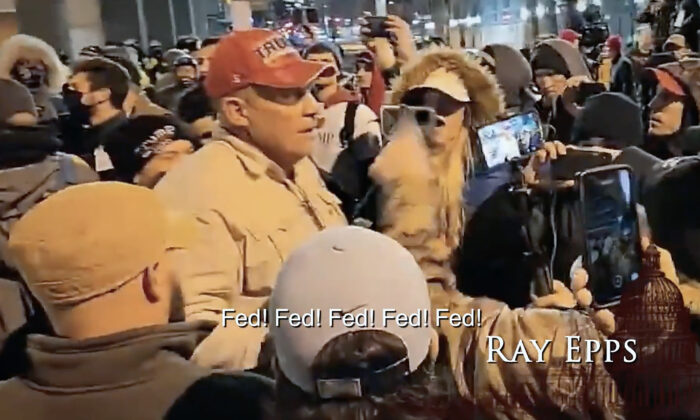 Ray Epps seen on Jan. 5, 2021, trying to recruit men to attack the Capitol. He is accused of being a federal agent. (CapitolPunishmentTheMovie.com/Bark at the Hole Productions)
Crime and Incidents

EXCLUSIVE: Ray Epps’s Attorney Responds to Claims His Client Is an FBI Informant

The attorney for Capitol Hill protest participant Ray Epps, former FBI agent John Blischak, told The Epoch Times on Jan. 12 that his client has been interviewed by federal law enforcers and “unequivocally, he is not an FBI informant.”

Speculation about Epps has gradually built for months, coming to a head when top federal law enforcement officials refused to answer questions about his alleged connections to law enforcement during a Jan. 11 Senate hearing on domestic terrorism. The Democratic-led House committee investigating the Jan. 6, 2021, breach of the U.S. Capitol released a statement following the hearing, claiming to have interviewed Epps and that he’s not a “fed”—but this prompted further questions and criticism.

While The Epoch Times was initially unable to reach Epps for comment, he responded to a text message later on the night of Jan. 11.

“Please refer any questions to our attorney John Blischak,” Epps wrote. “He will be happy to answer your questions, as I’ve been advised not to talk to anyone at this time.”

When reached by phone the next morning, Blischak vigorously denied that Epps is a federal informant.

“He was interviewed by the FBI in Arizona,” he said. “I was present during that interview, and unequivocally, he is not an FBI informant.”

Asked whether Epps is an asset for any government agency—law enforcement, intelligence, or otherwise—Blischak said, “Not to my knowledge.”

Then why didn’t Department of Justice officials deny any connections to Epps?

“Knowing the FBI as I do, they’re not going to comment one way or another,” Blischak said.

Blischak also denied any deals or agreements between Epps and the FBI. He said he’s representing Epps “in the event that he becomes a potential defendant in any action brought as to what happened on Jan. 6, 2021.”

“We’ve been working with the House Committee,” Blischak. “That’s what we’ve been doing.”

The Epoch Times asked whether Epps was under oath during his interview with the Jan. 6 Committee or with the FBI. Blischak didn’t directly answer the question, instead explaining that when FBI agents interview individuals, they typically aren’t under oath.

When asked for a copy of the transcript between Epps and the committee, Blischak said copies will be provided to attorneys of Jan. 6 defendants.

“I can, but I don’t have it. I probably can down the road, but I haven’t made any effort,” he said when The Epoch Times requested a copy. “I first want to get with my client.”

When asked to characterize Epps’s actions on Jan. 5 and 6, Blischak said, “Merely present.”

Video footage shows Epps urging protestors to enter the Capitol on multiple occasions, as well as talking to someone at the initial breach site right before that person began rushing the barricades—raising questions among some about whether Epps told the person to attack.

As to why his client hasn’t been charged, Blischak said, “Because he’s not guilty! He has a good attorney.”

Blischak is a former FBI agent who worked in Cleveland and then Arizona from 1974–85.

His bio says: “In 1975, John W. Blischak embarked on a rewarding nine-year career as an FBI agent with the U.S. Department of Justice, commencing in Cleveland and thereafter transferring to Phoenix. Wanting to seek independence and a challenge, Mr. Blischak, voluntarily left the FBI and commenced a three-year stint as a prosecutor in the Maricopa County [Arizona] Attorney’s Office.”

Since then, Blischak has been handling a variety of criminal matters, from DUI cases to white-collar crime, according to his site.

Blischak downplayed the significance of his past with the FBI.

“There’s no correlation. It’s public record. I can’t lie that I was an FBI agent from ’75-’84, but I do not know that when he retained me, that he knew that,” he said. “In other words, he didn’t retain me because I’m a former FBI agent.”

Richard Booth, an independent researcher of the Oklahoma City bombing, told The Epoch Times that it’s common for FBI agents to transition into private practice for financial reasons. He cited former FBI Deputy Director Weldon Kennedy, who wrote in his memoirs about how many agents struggled to make ends meet when transferred to expensive places such as New York City.

“Many in FBI are lawyers and they’re notoriously underpaid, so not surprised to see one practicing law,” Booth said. “On the other hand, it sure looks suspicious.”

Meanwhile, Blischak said he hasn’t issued a demand for a retraction or had any other communications with Revolver News, the site that published the original deep dives into Epps.

“We’ve had discussions. … I personally haven’t been involved in that aspect,” he said.

“They [Revolver] are throwing him against the wall. I know that, and right now I have a meeting [with Epps today]. He’s going to be in my office in about four hours, and I’ll know our future plans after that meeting.”