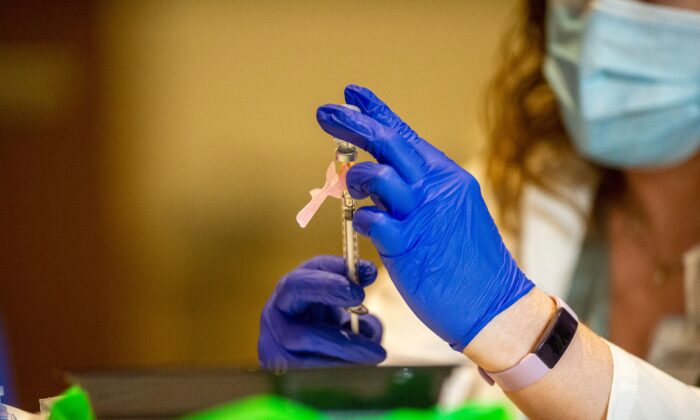 A pharmacist prepares the Pfizer-BioNTech vaccine at the Hartford Convention Center in Hartford, Conn., on Jan. 4, 2021. (Joseph Prezioso/AFP via Getty Images)
Vaccines & Safety

A former clinical trial overseer for a contractor holding trials of Pfizer’s COVID-19 vaccine is pressing forward with a lawsuit against Pfizer and her former company despite the U.S. government declining to side with her.

Brook Jackson was fired by the contractor, Ventavia Research Group, in 2020. She came forward as a whistleblower in 2021.

Jackson filed a False Claims Act suit against Pfizer, Ventavia, and another company involved in the trial, ICON. It’s been under seal for over a year but is now public after the U.S. Department of Justice declined to intervene on her behalf.

Government lawyers didn’t explain the choice not to intervene, and the Food and Drug Administration (FDA), which investigates alleged clinical trial fraud, didn’t respond to a request for comment.

The choice, though, hasn’t deterred the whistleblower.

“We’re going to pursue the case without the help of the government,” Jackson told The Epoch Times.

She said she wasn’t surprised but felt “total disappointment” when, after over a year of putting off a decision, the government declined to intervene.

The odds of success aren’t good, but “it’s just a chance I have to take,” Jackson said. “I just feel like somebody has to be held accountable.”

Jackson set off a firestorm when the British Medical Journal in November 2021 published a piece based on documents, recordings, and other materials from Jackson that outlines repeated failures by Ventavia to properly run sites for Pfizer’s COVID-19 vaccine trial before it received emergency clearance from U.S. drug regulators.

While the article didn’t include any of the materials, many were filed with the court and obtained by The Epoch Times, including emails that detail problems observed not just by Jackson, but other Ventavia workers.

For instance, Lovica Downs wrote on Sept. 18, 2020, to Jackson and another employee that she observed boxes containing patient information left on the counter “full[y] exposed to anyone that entered the room could see.”

Other missives described other problems.

Marnie Fisher, Ventavia’s director of operations at the time, said on Sept. 21, 2020, that an investigation found that multiple sites had left documents exposed, including a schedule with patient names on it; adverse events either “not being reported correctly or at all”; the vaccine and placebo “not being kept locked” in “disorganized” rooms; and informed consent errors.

The documents show that Ventavia employees were aware of serious problems arising during the trial, including vaccine administrators who were either described as having “no training” and “very little oversight” or lacking medical certifications or background. A Pfizer official was copied on, and answered some of the emails.

The full sets of documents are embedded; the article continues below them.

Downs declined to comment, while Fisher couldn’t be reached. ICON and Pfizer didn’t respond to requests for comment. Ventavia spokeswoman Lauren Foreman told The Epoch Times via email last year that Jackson worked for Ventavia but “no part of her job responsibilities concerned the clinical trials at issue.”

In an updated statement on Feb. 11, Foreman added, “Although Jackson was hired to oversee certain sites and aspects of clinical trials, she was only employed with Ventavia for 18 days, and, as a result, did not have the longevity with the company to complete the training for the role for which she was hired.”

Jackson, through her lawyer, recently threatened to file a defamation lawsuit against Ventavia over its description of her employment.

The FDA told The Epoch Times in an email last year, “Although the agency cannot comment further at this time in this ongoing matter, FDA has full confidence in the data that were used to support the Pfizer-BioNTech COVID-19 Vaccine authorization and the Comirnaty approval.”

Spokespersons didn’t reply when asked on Feb. 14 for an update.

Jackson was fired hours after filing a complaint with the FDA. A Pfizer official within weeks reached out directly to Jackson for more information, according to text messages reviewed by The Epoch Times.

The suit was brought under the False Claims Act, which enables Americans to file suits on behalf of the government “against those who have defrauded the government,” according to the government. More than $5.6 billion has been obtained through suits under the act, as of fall 2021.

The suit says Pfizer, ICON, and Ventavia “deliberately withheld crucial information from the United States that calls the safety and efficacy of their vaccine into question.”

“Namely, Defendants concealed violations of both their clinical trial protocol and federal regulations, including falsification of clinical trial documents,” it says.

“Due to Defendants’ scheme, millions of Americans have received a misbranded vaccination which is potentially not as effective as represented.”

Jackson is asking the court to award her damages and back pay and reinstate her to her position with Ventavia.