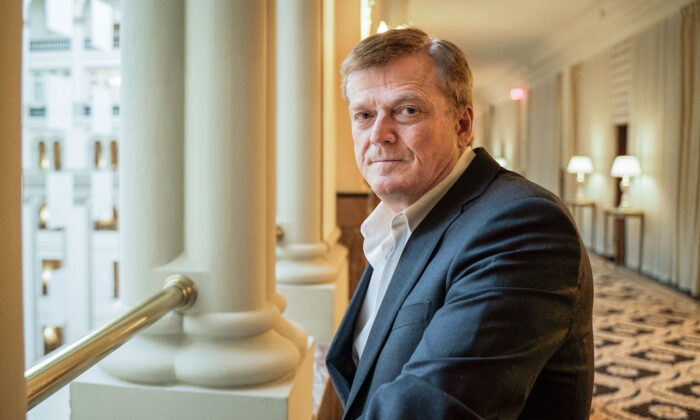 Roman Balmakov
Roman Balmakov is a Reporter with The Epoch Times and host of the show, “Facts Matter.” He has travelled around the country (as well as overseas) covering protests, riots, and elections. He is also the producer of many Epoch Times’ commercials, both on TV and social media.
View profile
biggersmaller
Print

Patrick Byrne met with then-President Donald Trump in the Oval Office on Dec. 18, 2020, to urge him to investigate allegations of election fraud. Byrne, founder and former CEO of online retailer Overstock, is set to testify before the January 6th House Select Committee on July 15.

In an exclusive interview with The Epoch Times, Byrne recounted his meeting with Trump, which included former national security adviser Michael Flynn and Sidney Powell, former attorney to Trump’s campaign and former federal prosecutor, along with a number of White House officials.

The roughly 4.5-hour meeting was “nothing like it has been reported,” Byrne said in an interview with EpochTV’s “Facts Matter” on July 14.

Byrne said he used a prior invitation from a White House staffer for a tour of the building as a way to gain entry with Flynn and Powell, with the hope of getting to talk to the president about his plan to investigate the widespread allegations of voter fraud.

“We were always after the most minimal on that range of options, which was to do a quick investigation that we said could be done in a few days,” Byrne said of the plan.

Byrne described a chance encounter with the president as he walked by that enabled the group to meet in the Oval Office. The trio presented to Trump two executive orders—one signed by former President Barack Obama in 2015 and one by Trump in 2018—which, they said, gave Trump the authority to launch an investigation in the event of foreign interference in the election.

“It has nothing to do with the theories of vote flipping from space. It has nothing to do with the alleged South Korean jets or Germany this or Italy that or any of that,” Byrne said. “The argument that was made to the president was that under two executive orders … that say if a foreign nation interferes in one of our elections, disrupts an election, the president really gets a range of options.”

Much of the conversation prior to the arrival of White House attorneys in the room centered on the question of whether multiple government documents constituted enough justification to launch an investigation based on the authority given in the executive orders, according to Byrne.

The documents included an Oct. 30, 2020, pre-election warning by the FBI and the Cybersecurity and Infrastructure Security Agency (CISA) that Iranian state actors were targeting U.S. state websites to obtain voter registration data—and were successful in at least one state; an Oct. 22, 2020, warning of unauthorized access to IT systems used by U.S. election officials and election influence campaign by Iranian state actors; and an FBI, CISA, and DNI statement on the SolarWinds Orion vulnerability.

Byrne, who said he didn’t vote for Trump in 2016 and hadn’t ever voted Republican, said he was impressed at “how smart he [Trump] is,” which never came across “from the way he was portrayed in the media.”

Trump studied the documents in silence as he received them and then made precise comments, Byrne said.

“So what is it you folks are asking me to do?” Trump asked, leaning back, according to Byrne.

Byrne said he laid out several choices that Trump could make to pursue a “very quick and dirty investigation.”

“That’s why I think that if there’s any charges for them, they should come after me” rather than Trump, he said.

The first option Byrne laid out was to investigate “the obvious six counties where the voting record was stopped.” Or, a more “heavy-handed option,” he said, would be to target 31 counties previously selected by a political scientist.

Byrne then suggested that a cyber team could make copies of hard drives to conduct forensic analysis. Alternatively, investigators could travel to the counties and remain on site for several days to count the ballots and livestream the forensic checks.

To lead the investigation, Byrne proposed a joint team composed of cyber analysts from the U.S. Marshals Service under the Justice Department and the National Guard.

At that point, Pat Cipollone, then-White House counsel—who had joined the meeting at some point and was sitting behind Byrne—stepped forward to raise objections, according to Byrne.

“Mr. President, the nation will go nuts if they see even one uniform around this,” Cipollone said, according to Byrne’s recollection. Others, including Flynn, also opposed the idea.

“The DHS [Department of Homeland Security] has teams that are perfectly adequate for this,” Bryne recalled Flynn saying.

Byrne made his case again.

“Sir, just to be clear, obviously, it’s your choice, not my choice,” he said. “I think that we’re in this national crisis because we’ve had a complete breakdown of trust, and I’m not sure that doesn’t extend to the FBI and the DHS.

“If this is all about reinvigorating the system of trust, the U.S. courts are very trusted and the military is very trusted.”

Byrne said he also noted that the National Guard, while in uniform, is made up of citizen soldiers, making their presence more acceptable.

Trump let him finish “that whole spiel” before voting him down.

Byrne insists that he’s the only one who ever put the idea of “uniforms” on the table.

“It was not Donald Trump, not anyone else,” he said. “It was on the table for about 28 seconds. And everybody in the room said no. And Donald Trump said no. It was robustly put down.”

Byrne said Trump hinted at least twice that evening that the idea of leaving the White House held an appeal.

“I’ll never spend a night in this town again. I’ve got my golf courses, I’ve got my friends. Trust me, Pat, my life’s going to get a lot better,” Trump said, according to Byrne. “But how can I do that? If I think that this election was stolen and there might be a foreign element involved, how can I really do that?”

Byrne said, “He was anything but some crazed tyrant clutching to power.”

What also became clear was that Trump “was being completely undermined by everyone around him,” he said.

Trump, at one moment, turned to Cipollone to express his disappointment that he hadn’t been alerted to the executive powers.

“Why didn’t you even tell me about these orders, Pat? … Why did I have to hear it from them? At least they want to fight for me,” Trump said, Byrne recalled.

“This man [Cipollone] has been telling staffers systematically … that we have to get you out of here, [that] we have to get the president in the transition mode, just get him to concede,” Byrne said he told Trump, noting that he could get White House staffers to back up his statements within half an hour.

Cipollone’s response, according to Byrne, was, “Mr. President, you know how hard I’ve been working for you?”

Byrne then watched as Cipollone and several other officials “stormed out.”

“​​They stormed out three different times,” Byrne said. “I was shocked at how they treated the president. I didn’t even vote for the guy. I didn’t even really like him until this meeting, frankly.

“They were just so clearly being obstructionists. I was hearing that they were being told, if you get the president out the door, there’ll be a million-dollar job for you in such-and-such lobbying firm. But if you don’t, your kids aren’t getting into Yale and your kids are getting thrown out of the school they’re in.

According to Byrne, one of the White House lawyers told Trump that he had the authority to appoint Powell as special counsel if he chose to do so.

About 30 minutes later, Trump was so fed up with his White House attorneys, that’s what he did, Byrne said.

Byrne said Flynn told Trump that the president had the same authority to grant her a top-secret clearance verbally, which he said the president then granted.

“It was left sort of with a rough understanding this was going to happen,” Byrne said.

The three—Byrne, Powell, and Flynn—left somewhere past midnight with a sense of excitement that they were “clearing up the mystery.”

Over the weekend, however, when Powell tried to get a White House ID and desk, they discovered that the arrangement “had all fallen through.”

Byrne said he was later told that lawyer and former New York mayor Rudy Giuliani had convinced the president to back out of the plan.

Giuliani on his radio program on July 14 recalled the events at the White House during the meeting.

He said he was called over to the White House by the president and reviewed the documents “purporting to show foreign involvement in the election.”

“I read through them carefully, I came back, and I said it’s clear to me that there’s not enough here,” Giuliani said.

He said the president “didn’t disagree at all” with him and Giuliani thought “it was his sense anyway.”

Questioning election results and calling for an investigation hadn’t been viewed as controversial until that November, Byrne said.

“I didn’t see that as a huge deal between being in a constitutional crisis that could end the nation—which I knew where we’d be if we tried to choke down the election that nobody had any real confidence in—or getting an answer like that,” he said. “It’s different being an entrepreneur than a lawyer. I’m just thinking, ‘Gee, our country is going to enter this nebulous, awful space or we can in seven days, whatever, we’ll have a total answer to this.’ That’s how an entrepreneur thinks.”

Roman Balmakov
Roman Balmakov is a Reporter with The Epoch Times and host of the show, “Facts Matter.” He has travelled around the country (as well as overseas) covering protests, riots, and elections. He is also the producer of many Epoch Times’ commercials, both on TV and social media.