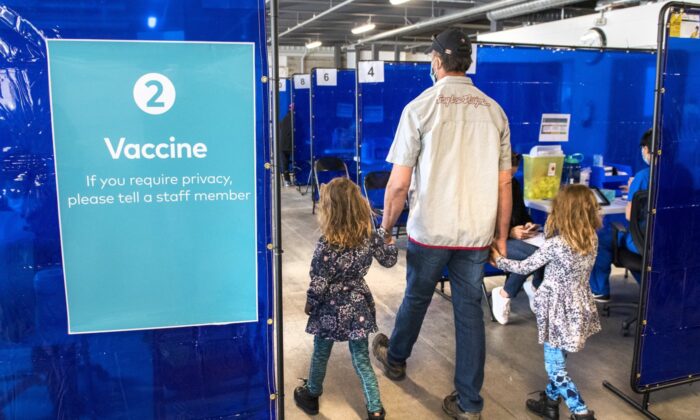 A man arrives with two young girls for his shot at the COVID-19 vaccination clinic at the Ontario Food Terminal in Toronto on May 11, 2021. (Frank Gunn/The Canadian Press)
Canada

EXCLUSIVE: Official Who Authorized COVID Vaccines in Canada Not Consulted on Mandate

The federal government official with final authority on approving vaccines in Canada did not advise, and was at no point consulted about, imposing or keeping in place the vaccine mandate in travel, court documents show.

Dr. Celia Lourenco, director general of the Biologic and Radiopharmaceutical Drugs Directorate within Health Canada’s Health Products and Food Branch, provided this information in early June while being cross-examined as a government witness in support of the mandate.

Lourenco’s directorate is in charge of reviewing drugs like vaccines and she has the final say on their authorization.

“So I want to be clear, nobody from the Canadian government—and when I say the ‘Canadian government,’ I include the Prime Minister’s Office, the Ministry of Transport, minister of health—no one ever consulted with you as to whether or not the government should enact that vaccine mandate for travel?” asked lawyer Sam Presvelos, who represents applicants Karl Harrison and Shaun Rickard in their legal challenge against the mandate.

Presvelos also asked Lourenco if any government department consulted her on the continued requirement for the vaccine mandate in travel since her authorization of the vaccines. She said it wasn’t the case.

It is possible the government received advice from other sectors of Health Canada, such as the Public Health Agency of Canada (PHAC), but Lourenco and her team’s knowledge of the ins and outs of the vaccines gives her authority to speak on the matter.

Lourenco said she communicates with PHAC regarding the efficacy and effectiveness of the vaccines but never discussed with them the requirement for a vaccine in travel.

Other government officials were also cross-examined as part of proceedings on the travel vaccine mandate legal challenge.

The government is attempting to declare the issue moot given the mandate was suspended (barring international arrivals), but applicants are fighting the motion and want their day in court.

Much of Lourenco’s cross-examination revolved around the issue of vaccine performance, discussed as “efficacy” in clinical trials and “effectiveness” in a real-world setting, and around the approval process.

Lourenco acknowledged that the current COVID-19 injections are all still under phase three of their clinical trials, with Moderna expected to complete its trial in December 2022 and Pfizer in December 2023.

She said, however, that they have completed “the reporting-out phase for the purposes of regulatory authorization.”

“So for regulatory authorization they needed to complete the phase of the trial where they were able to provide data on efficacy and safety up to a median of two months of followup of all the participants in the clinical trial.”

In order to bring these new drugs to market, the government issued a rare interim order in September 2020.

Before that, there were no alternative pathways to have vaccines or other drugs skip stages, Lourenco said.

“There was no … other pathway prior to the interim order. … The regular pathway is what we had available for authorizing a drug under the Food and Drugs Act,” she said.

She added that this has been the case for as long as she’s been with Health Canada, 21 years, although she did mention the use of interim orders for the H1N1 flu vaccine in 2009.

Despite not following the usual pathway, Lourenco said the review process was still robust.

“We did not change the requirements in terms of the evidence standard. The evidence and criteria for authorization for review—for assessing the safety of the vaccines—were not changed,” she said.

“What we changed with the interim order was to allow greater flexibility in terms of the review process, allow for, for example, rolling submissions to occur, so as data become available the manufacturers were able to submit it to Health Canada—which is not something that can happen in the normal process—and then allow for other tools like terms and conditions that could be imposed on the authorization.”

“You cannot choose to put at risk the people sitting beside you on an airplane,” Prime Minister Justin Trudeau told CBC on June 23 in defending the mandate. The federal government had suspended the mandate on June 20.

“I would answer that by saying that … they pose somewhat of a risk, but given that vaccinated travellers are vaccinated … their risk is reduced because they are protected by the vaccine,” answered Lourenco.

On the issue of protection offered by COVID vaccines, Lourenco was presented with charts prepared by PHAC on their waning protection.

The charts reportedly showed that two doses, presumably of mRNA injections, offered a 50 to 80 percent protection against symptomatic disease in the first month.

Beyond 12 weeks, the “‘vast majority of studies show effectiveness below 40 percent with a further decline [over] time to 20 percent or less’; correct?” Presvelos asked Lourenco about the charts.

“So I take it these figures here, these effectiveness figures, this wouldn’t qualify for authorization of this vaccine if we had observed this at the trial?” said Presvelos.

“It would not, no,” replied Lourenco.

Lourenco had previously explained that for vaccines to be authorized, they must demonstrate an efficacy superior to 50 percent in preventing infections during clinical trials.

Given the drastic fall in vaccine performance over time, Lourenco now says the prevention of serious outcomes is what justifies maintaining their authorization.

“In the post-market, of course we’re concerned still about effectiveness against infection, but if a vaccine is showing waning protection against infection, what we look for is does it still protect against severe disease. And if it does, then that supports our analysis in terms of the benefits continuing to outweigh the risks of the vaccine,” she said.

Yet Lourenco said there is no fixed-number threshold regarding protection against severe disease like there is for infection.

“We don’t have a corresponding number, no.”