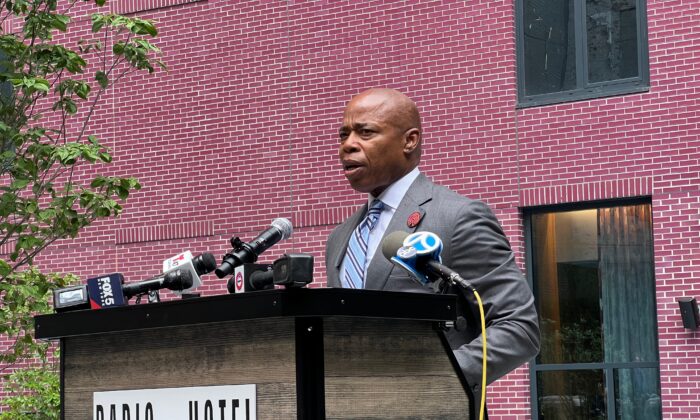 NEW YORK CITY—An email recently sent from New York City’s Human Resources Administration (HRA) to all names on its distribution list, and obtained by The Epoch Times, urged all staff who can work overtime to do so, to deal with a “drastic influx of asylum seekers” in Manhattan and the outer boroughs.

The internal request came about a week after the city’s Mayor Eric Adams described the growing stream of illegal aliens coming into the Big Apple as a “real burden on New Yorkers,” adding that the city already had “an overburdened shelter system.”

Dated July 28, the email stated: “Dear DSS/HRA Leadership and Staff, In recent weeks, we have seen a drastic influx of asylum seekers coming to our shelter intake sites. As a result, DHS is standing up several emergency shelters to ensure we have the capacity for these individuals.”

The email showed urgent internal efforts by social services agencies to grapple with the surge in illegal aliens arriving in New York City amid an ongoing border crisis that is vexing the Biden administration.

It continues with a plea for staff of the agency to commit to working overtime in order to help deal with the massive influx. “While we implement a longer term solution, there is a critical immediate need for Agency staff members to volunteer to work overtime to help manage these sites. Eligible employees who volunteer for this opportunity may earn cash overtime in accordance with contractual guidelines,” it stated.

“If you have availability to assist outside of your regularly scheduled hours, please speak with your supervisor to confirm and then enter your information via the link below. Participation is subject to final approval by Agency senior staff,” the email continued.

On July 29, the day after the email, the HSA and DSS declared an emergency, noting in a letter (pdf) to Comptroller Brad Lander and the city’s top lawyer Sylvia Hinds-Radix that as of July 28, some 4,000 asylum seekers had entered New York’s shelter system in the past three months, driving up the DHS census by roughly 10 percent.

For some experts and advocates, the developments suggest that not even recent public statements by Adams, in which the mayor acknowledged the problems resulting from the huge influx of asylum seekers south of the border, have provided a full and accurate measure of the strain that local authorities are experiencing.

On July 19, the mayor’s office issued a plea for federal help, issuing a statement that read: “New York has experienced a sharp increase in asylum seekers from Latin America and other regions, with more than 2,800 individuals entering New York City’s shelter system.”

“In some instances, families are arriving on buses sent by the Texas and Arizona governments, while in other cases, it appears that individuals are being sent by the federal government,” Adams said in the statement.

The mayor then issued an urgent plea: “In order to meet both the legal mandate as a right-to-shelter city and provide high-quality shelter and services for those who enter our system, New York City needs additional federal resources immediately. If we do not get these urgently needed resources, we may struggle to provide the proper level of support our clients deserve.”

Adam’s response has not satisfied some local advocacy and social services organizations, who have sharply criticized the mayor for what they characterize as his lack of preparedness and for trying to deflect blame for the situation to the federal level.

The Legal Aid Society and the Coalition for the Homeless released a joint statement on July 21 addressing what they called Adams’s “misleading and problematic comments” on the surge.

“The Mayor isn’t speaking the whole truth. We spoke to eight families with children this morning who slept on the floor last night at the City’s shelter intake center in the Bronx, in addition to the four families the Mayor acknowledged who had slept there Sunday night. This humanitarian crisis shows no sign of abating anytime soon regardless of how many press conferences the Mayor holds to conceal this reality.”

The mayor and his officials knew what was brewing on the southern border and could have taken action months ago to avert the crisis, the advocates alleged.

“As City officials just acknowledged, they have known about this influx of families, a portion attributable to those seeking asylum, for months. But, despite this knowledge, the Administration still lacks a plan to ensure safe shelter placement, and officials failed to detail any specifics for a viable path forward at today’s press conference, opting instead to heap praise on each other,” the statement continued.

“The City is also failing to use its resources to move people into permanent housing,” it added.

Stephen Eide, a senior fellow at the Manhattan Institute think tank who studies the homelessness issue, told The Epoch Times that the Adams administration has struggled to fulfill the terms of the right-to-shelter mandate in the midst of the unexpected arrivals.

The impact has been particularly acute for people who were already homeless on the streets of New York, Eide said, pointing to comments that a few residents of the Bellevue Men’s Shelter made recently to the New York Post. One of them told the Post: “You gotta take care of the home first. This is our home first.”

In Eide’s view, it will require further investigation to establish just how much federal policy contributed to the current situation, but it is unusual for normal levels of immigration to fuel a crisis like the one that the city is now grappling with.

“I think the federal role in how these adults and families wound up in New York’s shelter system remains murky. But, normally, this would not require much coordination. Immigration, normally, does not contribute much to New York’s homelessness challenge, at least not in a direct way,” he said.

For 2,800 immigrants to enter the shelter system so abruptly in just a few weeks is an “unsustainable” situation, Eide continued.

“Affordable housing—often seen as the exit strategy from shelter—is even scarcer than shelter. There are native New Yorkers who have been waiting for years for affordable housing units,” he added.

In other cities, the directors of organizations overseeing efforts to alleviate homelessness have complained about the lack of coordination between local and federal approaches to the issue and the chaos resulting on the streets, though they do not necessarily hold the current administration responsible.

“There is a disconnect between local and federal housing policy. The federal government played a major role in creating homelessness by cutting tens of billions of dollars from affordable housing programs beginning in the early 1980s,” Tyler Kyser, policy director of the San Francisco-based Coalition on Homelessness, told The Epoch Times.

“Even in San Francisco, as we have made really great strides by investing in housing, we have not seen these efforts matched on a federal level. I think municipal, state, and federal officials could fund more affordable housing,” Kyser said.

The Epoch Times has reached out to the mayor’s office, and to HRA and DSS for comment.