EXCLUSIVE: ‘Nothing Extreme About Me’: Pennsylvania’s Mastriano on Critics, His Agenda 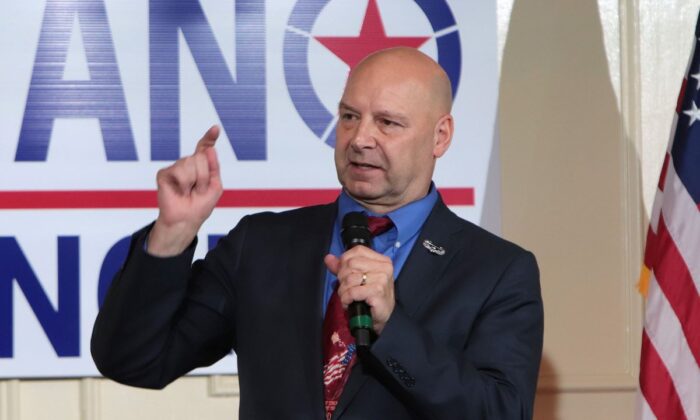 Pennsylvania state Sen. Doug Mastriano, who is the state’s Republican nominee for governor, doesn’t give the media much credit for accuracy.

“They, and their boosters on the left, are the ones who want to tell us what to think,” Mastriano told The Epoch Times. “They’re the ones who told us that the BLM [Black Lives Matter] protests were mostly peaceful as city blocks were burning and dozens of people were being killed.

“But then they’ll flip it on us on Jan. 6 and try to say how outrageous that was—which it was–but it’s all perspective.”

Mastriano, who is endorsed by former President Donald Trump, was invited to speak in Washington on Jan. 6, 2021, and says it was his constitutional right to be there. Like many in attendance, he has been questioned about that day, and the congressional Jan. 6 committee has shown interest in him.

“I have nothing to hide. I was there to peacefully protest and left when it was clear things weren’t going as they should have,” Mastriano said. “I provided documents to the committee per their request.”

Mastriano is cooperating with the Jan. 6 committee, and says Americans understand that the panel’s expansive investigation is politically motivated.

“Instead of dealing with real issues, Democrats want to demonize people they disagree with politically. They’re not going to shut me up. This is nothing but a McCarthy-like intimidation tactic to shut up and cancel their political opposition.”

While many state politicians garner little national media attention, Mastriano has been called a right-wing extremist and worse in pieces from the likes of The New York Times, The Washington Post, CNN, and Politico.

“The irony is, I’ve been vetted by the U.S. government in eight or nine background investigations for my top-secret clearance in the Army,” Mastriano said. “The fact is, if there was an extreme bone in my body, left or right, I would never be entrusted with some of the most sensitive and damaging secrets our nation has, with my top-secret special Compartmented Information Access that I had for 30 years.”

Mastriano is a combat veteran, commissioned in the Army in 1986. He served along the Iron Curtain. While serving along the East German and Czechoslovakian borders, he witnessed the end of the Cold War and was later deployed to Iraq for Operation Desert Storm. He has served in Washington, D.C., the 3rd Infantry Division, and U.S. Army Europe. After 9/11, Mastriano was the lead planner for the operation to invade Iraq via Turkey. He served for four years with NATO and was deployed three times to Afghanistan.

He was the director of NATO’s Joint Intelligence Center in Afghanistan, leading 80 people from 18 nations.

He completed his career as a professor at the U.S. Army War College and retired at the rank of colonel. He views his 2019 entry into politics as a continuation of service to the country.

“Personally, I had nothing to gain from it,” Mastriano said. “I’m doing this because I’ve seen mismanagement by failed power. Our freedoms are under assault.”

His military intelligence training taught him to assess new information by reviewing the quality of the source.

“As these people in far-left media outlets attack me, I just ask myself, ‘consider the source.’ It’s sad that so many of these once very reliable and profound media outlets in America have become nothing more than mouthpieces for the Democrat Party—cheerleaders for the left. So what they say doesn’t have a lot of credence with me.

“I really don’t care what they say because they’ve become so irrelevant as far as how normal Americans like me think. There’s nothing extreme about me. I believe in freedom for all men.”

He says radical elements in the media are the actual extremists.

“They’re backing a party that thinks it’s scientific and OK to put a biological male into female sports. This is the same cabal that, for two years, lectured us to follow the science on COVID. But they can’t follow the science when it comes to gender.”

The University of Pennsylvania swim team drew criticism this year when it allowed transgender swimmer Lia Thomas to compete on the women’s team.

On June 7, the “Fairness in Women’s Sports Act,” co-sponsored by Mastriano, was approved by the state Senate. It says school athletic teams designated for women should not be open to the male sex. It defines sex as the biological distinction between male and female, based on reproductive biology and genetic makeup. Next, the measure must be approved by the House, although Gov. Tom Wolf, a Democrat, has promised to veto the legislation.

Mastriano has been a visible proponent of election integrity since November 2020 when he hosted a Senate Majority Policy Committee hearing in Gettysburg. The hearing featured former New York City Mayor Rudy Giuliani and was televised nationally. Hours of testimony regarding the 2020 election were presented.

Mastriano continued to investigate the election until GOP leadership in the state Senate removed him from the task without explanation.

“I’m a state senator and I represent a quarter-million people, and when things happen in elections and my constituents cry out to me with concerns, I take it seriously,” he said. “In 2020, there were thousands of reports from across the state to me personally. I exercised my constitutional power to hold a hearing to investigate these allegations. I wrongly believed that some of the media would actually break from the Democrats’ talking points and actually see if these allegations are so.

“But instead of investigating these allegations from people from across the state, all they did is use Democrat talking points to belittle and attack.”

As he travels the state, Mastriano still meets people who have questions, and he says it’s not just Republicans.

“It’s not just conspiracy. It’s a fact. People have had some outrageous or questionable things happen to them. That’s 2020, 2021. And even in this recent primary [in] 2022, they believe their voting rights have been infringed upon. We need to get that solved.”

Mastriano proposes clearing the voter rolls and having every voter re-register.

“The goal is to start fresh. This is not going to be popular on the left or right, because it’s going to be inconvenient. Everyone that wants to vote is going to have to go back to re-register. I think that’s the best way to start restoring confidence in voting in our state.”

Mastriano is pro-life, but says his views on abortion are irrelevant because there’s not a lot a governor can do without working with the legislative body.

If Roe v. Wade is struck down and the power to regulate abortion is fully returned to the states, Mastriano would support some of the legislation currently proposed in Pennsylvania, including the Down Syndrome Protection Act, which won legislative approval but was vetoed by Wolf. The bill prevents abortion strictly based on a baby being diagnosed with Down syndrome.

He would also sign a heartbeat bill now being debated by lawmakers, preventing abortion after a heartbeat can be detected.

“I have a real problem with the left exploiting tragedy for their own political reasons, morally and ethically, before people are even laid to rest. The left instantly is out there screaming and hollering for some kind of political change in gun laws—political, not legal—before there’s an investigation, before we know what gun laws were violated, before we even know if additional gun laws could have prevented the attack.”

In Pennsylvania, adult victims of childhood sexual assault are now being used in television commercials supporting state Attorney General Josh Shapiro, the Democratic nominee for governor and Mastriano’s opponent in the general election. Shapiro led a grand jury investigation of decades-long abuse and coverups in the Catholic Church. The victims tell their stories of abuse in the advertisement, and thank Shapiro for the investigation.

“He did his report on the Catholic Church, and then nothing happened,” Mastriano said. “In the Wolf administration, of which Josh Shapiro is part, they failed the very same victims they said they care about by not constitutionally advertising the amendment that had passed through the General Assembly. It’s nothing but more talk and rhetoric and no action by the Democrat administration.

“They want to exploit tragedy. They want to take advantage of people suffering here, and they don’t do anything about it.”

Shapiro didn’t respond by press time to a request by The Epoch Times for comment.

The 2021 amendment mentioned by Mastriano would have allowed a two-year window in the statute of limitations for victims to seek damages in previously barred claims. But Kathy Boockvar, then-secretary of state, failed to properly advertise the amendment to appear on the ballot, and it couldn’t go forward; that led Boockvar, who managed the 2020 election in Pennsylvania, to step down.

If elected, Mastriano says he will roll back energy regulations and stimulate the state’s natural gas and coal industry.

“These failed policies of the Biden administration are killing people, and now people have to decide between cooling their house this summer or food, or putting gas in their cars and trucks or buying medicine,” he said. “We should be enjoying some of the best, cheapest energy in the nation.”