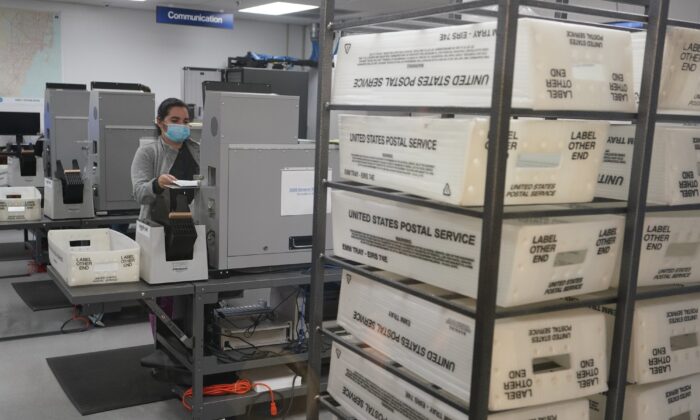 According to the “Pre-Election Observation Report” released by Floridians for Election Transparency (FFET) and obtained exclusively by The Epoch Times (pdf), there are numerous flaws, inconsistencies, and violations of Florida election laws that raise serious concerns about the election system.

FFET contacted the supervisors of elections in 28 of the state’s 67 counties for the study, and 18 agreed to participate. Ten others declined to comment.

FFET is a committee under Florida for America First, which is backed by Gen. Michael Flynn’s organization, The America Project, founded by Flynn, his brother Joe Flynn, and Patrick Byrne, founder and former CEO of Overstock.com.

Michael Thompson presented the report at a press conference in Naples, Florida, on Aug. 15.

With 30 “winner take all” electoral votes, Florida is now third in the electoral vote ranking, behind California (55 votes) and Texas (38 votes), and a recent surge in Republican voter registrations have made this swing state even more consequential in the upcoming 2022 midterms and the 2024 presidential cycle.

Despite Florida’s successful adoption of election integrity legislation and Gov. Ron DeSantis’s establishment of the nation’s first Office of Election Crimes and Security, FFET pointed out in its report that “public faith in the integrity and fairness of elections has decreased significantly in recent years.”

The Concerns of Election Supervisors

When the SOEs were asked if they had concerns about administering the upcoming elections, 39 percent said they were worried about “misinformation and disinformation on the security and integrity of the election process” being spread throughout their community.

The report stated that “one supervisor was concerned that the media will propose false narratives attempting to take away the confidence of the public in the security of the election process, and another worried about voters falling prey to media misinformation about election security.”

Another 28 percent of SOEs said they had no particular concerns about administering the upcoming elections, the second most common response to the question.

The remaining supervisors cited a myriad of other circumstances that SOEs must juggle while administering an election: redistricting, physical security, cyber security, voter education, the limited time available to adapt and train on new legislation and procedures, the tense political environment, and concerns that SOEs and poll workers might not respect the law or election integrity.

During the press conference, Thompson shared the concern expressed by Broward County Supervisor of Elections Joe Scott, who said he was most worried about physical security for election workers and feared that some voters might see it as “their patriotic duty” to “storm” the elections office to stop the workers from counting the votes.

Broward County made national headlines in 2018 after Gov. Rick Scott ousted former Supervisor of Elections Brenda Snipes for “misfeasance, incompetence and neglect of duty.” Snipes had a long history of losing thousands of ballots, allowing illegal immigrants and felons to vote, failure to report vote-by-mail counts on time, opening vote-by-mail ballots without the presence of a canvassing board, and illegally destroying thousands of ballots that were subject to a public records request.

To get a better understanding of the process of updating voter rolls, FFET asked the election supervisors how often they updated their voter rolls, such as removing those who have died or moved out of the county. Unfortunately, the answers they received—once every two years, once every year, twice a year, every four months, and “not sure”—reflected a troubling inconsistency that has proven to elevate the potential for voter fraud.

Considering Florida’s high concentration of retirees and the elderly, with 20.5 percent of the population being over 65 according to the U.S. Census Bureau, so-called “dirty” voter rolls can be particularly problematic.

Despite consistent reports that some Florida voter rolls are “suspiciously” inaccurate and bloated with inactive or dead voters, every SOE questioned expressed confidence that their voter lists are accurate and up to date.

One of the most troubling things FFET learned was the number of SOEs who said they rely on the Electronic Registration Information Center (ERIC) for updates to their voter rolls.

The Problems With ‘ERIC’

ERIC is a nongovernmental organization created in 2012 by far-left activist David Becker when he worked for Pew Charitable Trusts.

Florida joined ERIC in 2019 under DeSantis and is among the 33 states and the District of Columbia that rely on ERIC for voter roll reports, but FFET recommends in its report that the state leave the voter registration system.

Rather than having new voters register in person, Florida is one of 25 states that allows third-party voter registration. This means nongovernmental organizations are allowed to register voters.

According to an official state website, there are hundreds of organizations of all political persuasions collecting voter registrations throughout the state. Florida is also one of only four states that allows unfettered access to the state’s voter registration database, but new legislation proposes to shield certain information from view, such as a voter’s date of birth, email address, phone number, and party affiliation.

Asked if they are “confident that third-party registration takes place without bribery, intimidation, or coercion, and are confident that only qualified voters are registered through these third parties,” less than half (44 percent) of the supervisors said yes.

About 17 percent were not confident in the integrity of third party voter registrations, and 39 percent were unsure.

Because third-party voter registration is conducted primarily by organizations with clear political agendas, and takes place without any oversight or security protocols, FFET believes it “damages voter confidence in the voter list and election process.”

Since the primary obligation of any election administrator is to ensure the integrity of an election in their area, FFET recommends that Florida only allow in-person voter registration at county election and administrative offices.

There have been numerous reports of rampant voter fraud in nursing homes across the country, including those Florida. Because Florida has a large population of senior citizens and residents in care homes, FFET asked the SOEs to explain how their office manages voting in nursing homes.

The most striking aspect of the responses was how much their answers varied.

These practices are in violation of ballot chain of custody requirements as outlined in a 2021 report (pdf) by the U.S. Election Assistance Commission. When divulging these illegal practices, none of the SOEs mentioned the presence of poll watchers, elections staff, poll workers, or any other security measures.

FFET then asked the SOEs if they thought it would be a good idea to go back to a manual voting process. All said no or did not respond at all. When asked why they didn’t think manual counting was a good idea, “the responses were fascinating,” the report stated.

More than half of the SOEs were concerned that manual counting would be less accurate, and many said it would be slower. Conversely, one supervisor said machines are more accurate, but the machine counting process takes longer than hand counting.

According to Florida Statute 101.5604, “the board of county commissioners of any county, at any regular meeting or a special meeting called for the purpose, may, upon consultation with the supervisor of elections, adopt, purchase or otherwise procure, and provide for the use of any electronic or electromechanical voting system approved by the Department of State in all or a portion of the election precincts of that county.”

For those who do adopt the use of voting machines, Florida Statute 101.5612 requires that “all electronic or electromechanical voting systems shall be thoroughly tested at the conclusion of maintenance and programming. Tests shall be sufficient to determine that the voting system is properly programmed, the election is correctly defined on the voting system, and all of the voting system input, output, and communication devices are working properly.”

Concerns have been expressed about the production, secure storage, and chain-of-custody for extra ballots, so FFET asked several questions about blank ballots and marked ballots were handled.

First, FFET asked how many extra ballots were available in each precinct. Again, the responses varied widely.

One supervisor said he ordered 50 percent more than the total number of registered voters. Four SOEs said 5 percent to 15 percent extra. Three SOEs said they requested a percentage of the precinct total of registered voters of 90 percent, 70 percent, or 65 percent, respectively. Five said they print ballots on demand, a practice normally used only during early voting. One said 50 extra ballots, and another said 400 to 500 extra ballots.

One supervisor simply said he “pads a little to make sure there are enough.”

During the process of tabulating mail-in ballots, there are times when the machine rejects a ballot due to voter error (more than one bubble filled in or not properly filled in) or because the ballot is damaged or flawed. These ballots are put through a process called manual adjudication. FFET asked the participating SOEs to briefly describe how ballots are adjudicated in their counties.

Most said their adjudication rate was between 0.5 and 1 percent, with Lee County being the outlier at 3 percent, and that they were adjudicated by a three-person canvassing board, as Florida election law requires.

But a few said they used two contract workers representing opposing parties. The law states that “during each meeting of the county canvassing board, each political party and each candidate may have one watcher able to view directly or on a display screen ballots being examined for signature matching and other processes.”

More than half said they have no poll watchers present during the adjudication.

According to the report, “poll watchers play an important role in deterring malpractice and reassuring the public that the voting and counting processes are free and fair, but there is increasing concern that the political parties are failing to recruit, train and deploy sufficient poll watchers to perform this essential function.”

One supervisor stated that poll watchers come out for the first day of early voting but often end up leaving.

According to the FFET report, there are several steps DeSantis can take to improve the accuracy of Florida’s voter rolls and help rebuild public confidence in the state’s elections, with the following recommendations: