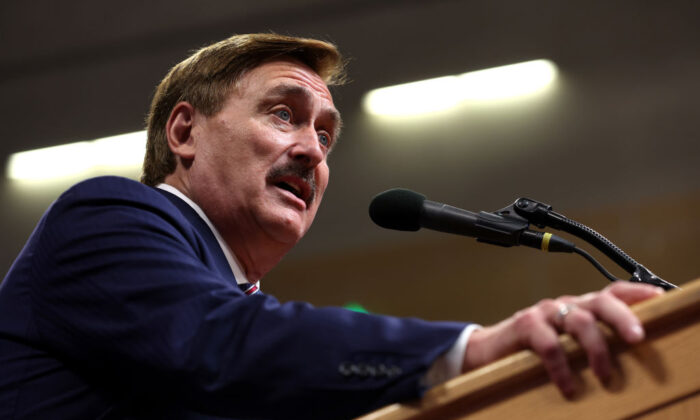 EXCLUSIVE: Lindell to Sue Government to Return His Phone, or Have Special Master Appointed

My Pillow’s CEO Mike Lindell is set to file a lawsuit against the U.S. government after federal agents seized his phone last week as part of a federal grand jury investigation run out of Colorado.

The agents cornered Lindell in three cars on Sept. 13 as he was driving back from a hunting trip in Iowa. In a search warrant they handed him, authorities outlined an expansive list of information they were seeking from Lindell’s phone relating to allegations of fraud during the 2020 presidential election. It also named a number of individuals allegedly implicated in the 2021 breach of election software in Mesa County, Colorado.

The search warrant cites potential breaches of three U.S. laws relating to identity theft, intentional damage to a protected computer, and conspiracy to comment on such offenses. Some of the information to be seized concerned the alleged tampering of voting machines and the “attempt to impair the integrity or availability” of the voting system.

The search and seizure warrant, Lindell and his lawyer Kurt Olsen argue, violated the businessman’s First, Fourth, and Fifth Amendment rights, which safeguards free speech, protects citizens from unreasonable searches and seizures, and shields citizens from criminal prosecution without due process, respectively. It also brought reputational harm and millions of dollars in monetary damage, Lindell told The Epoch Times ahead of the filing.

The lawsuit, to be filed on Sept. 20 in the U.S. District Court for the District of Minnesota, will seek the return of the seized phone that Lindell had relied on, in lieu of a laptop, to run his five businesses.

“That specific device was everything for me,” Lindell told The Epoch Times, describing his phone as a “filing cabinet.” The FBI wouldn’t allow him to back up his phone, he said in a previous interview.

Lindell is now trying to reconfigure everything as much as he can, the businessman said. “There are so many apps now I don’t have the passwords to, also my hearing aids, everything run off that,” he said, referring to the fact that his hearing aids had previously been connected to his phone.

The search warrant listed more than 20 types of data to be taken from Lindell’s phone, including the geographical location of Lindell and other named “co-conspirators” in the search warrant since Nov. 1, 2020, records indicating their state of mind regarding the alleged offenses, and the identity of any individuals he communicated with on the matter.

Lindell’s attorney said the lawsuit will seek to bar the U.S. government from using this information, and failing that, requests the appointment of an independent arbiter known as a special master to review the data for privileged information to be withheld from authorities.

“In any data that they access, we’re going to suppress the release of any information that they unlawfully obtained, and in the alternative, we’re going to ask for a special master to be appointed to review and segregate the data on his phone from what was required under the warrant,” Olsen told The Epoch Times.

The consequences of the FBI action were not limited to the loss of access to critical data, Lindell added.

Four companies who partnered Lindell’s MyStore, an online marketplace featuring American-made products, have backed out of agreements over the federal investigation—either “out of fear” or out of the belief that the businessman has “done something wrong,” Lindell said. A bank last week also informed Lindell that they will stop financing one of MyPillow’s products.

The direct monetary loss from these cancellations amounts to at least $5 million dollars, Lindell said.

“It’s kind of like: ‘we don’t want to deal with Mike Lindell, he’s done something wrong.’ They don’t want to be guilty by association,” he said.

With the lawsuit, Lindell said he wants to see himself “vindicated.”

“We can’t have the FBI weaponized against our people in the United States,” he said, adding that he will continue advocating for replacing voting machines with paper ballots. “This has to happen. I’m not going to ever let up.”

The FBI declined to comment. The Department of Justice didn’t answer a request from The Epoch Times for comment by the time of publication.

This article has been updated with a response from the FBI.