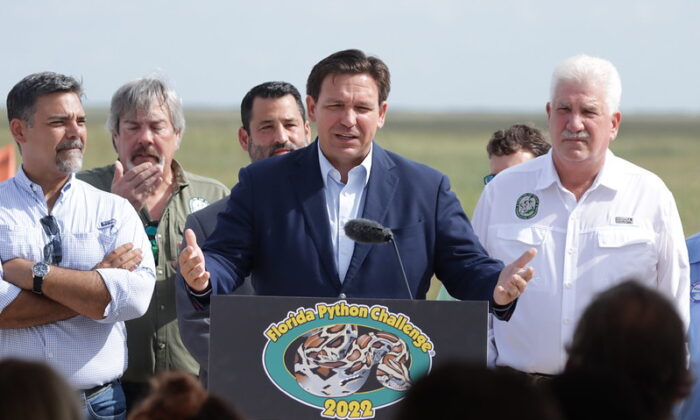 Florida’s Republican Party voter tally has reached 200,000 more voters than the Democrat Party for the first time in the state’s history, according to data obtained exclusively by The Epoch Times.

The GOP has been pressing a registration advantage since December when the party gained a historical first by outnumbering Democrats in the Sunshine state for the first time ever.

By March, the advantage had grown to 100,000 voters in favor of the Republicans, with another exponential leap this quarter bringing the total to over a 200,000 voter lead.

“Democrats are falling in line with Joe Biden’s policies that are making Americans’ lives harder and more expensive, but Governor DeSantis is standing in their way, making Florida the firewall for freedom,” Lindsey Curnutte, campaign spokesperson for Florida’s Republican Gov. Ron DeSantis, told the Epoch Times in a statement.

“It’s no surprise Republican voter registrations are growing at this impressive rate. Simply put, we will prove Florida is a red state in November,” Curnutte added.

Support for Democrats Have Eroded Since 2008

Florida was once considered a strong liberal state. Democrats had a 700,000 voter registration edge under Obama in 2008. Subsequent elections, however, saw that edge dwindle, from 550,000 voters in 2012 to a loss for Biden in the 2020 presidential election, according to data supplied by Politico.

And when DeSantis was elected governor in 2018, Republicans trailed Democrats by 300,000 votes, according to the DeSantis campaign.

The Democrat erosion is so marked that Politico reported a “creeping sense among state-level Democrats that national groups, including the White House and Democratic Governors Association, are writing off [the] state,” even as the White House denies it has abandoned Florida.

The executive director of the Democrat Party in Florida, Marcus Dixon, who responded by text message, declined to comment to The Epoch Times on behalf of the party regarding the White House abandonment of Florida.

Voters in Search of a Better Place

Jim Ellis, a professional election handicapper, however, told The Epoch Times that in fact, the Democratic Governors Association abandoned the state in December.

Ellis further noted that the registration tally marks the successful branding of Florida as a refuge for the vast middle class in America.

“The new Florida registration figures largely confirm what a great many people already believe—mainly that the huge influx of people into the state is largely comprised of right-of-center voters from blue states coming to a better place to live,” Ellis told The Epoch Times.

“Despite what California Governor Gavin Newsom is trying to sell in his Florida advertisements—which is a prelude to a ‘Newsom for President’ campaign—people moving into Florida, as opposed to out of California, certainly perceive the Sunshine State as the better place to live,” Ellis added.

Newsom raised eyebrows by running ads against Florida’s DeSantis over the Fourth of July weekend, paid for by Newsom’s gubernatorial campaign in California. Newsom spent $105,000 on the ad buy according to California’s local KTVU.

Under DeSantis, the goal has been to switch Florida to a solid Republican electoral vote, a trend that started under President Donald Trump’s national leadership that was able to appeal to traditional working-class constituencies.

Today, there are 1 million more registrants in Florida than four years ago, and the DeSantis team has netted just under 500,000 voters for the GOP registrants over that same time, says the governor’s campaign.

The Florida governor has been enjoying growing support for a presidential run, thanks to the efforts of third parties to draft DeSantis into the 2024 presidential race.

Although the Ready for Ron Pac responsible for the draft DeSantis movement told The Epoch Times in a previous interview that they don’t think DeSantis would run against Trump, neither Trump nor DeSantis has yet disavowed running for president in 2024.

An article in Politico last month, using anonymous sources the publication claims are close to DeSantis, claimed that the governor is hoping for a Trump indictment over the events of Jan. 6, 2021.

The result would clear the way for a DeSantis presidential run.

The DeSantis reelection campaign denied the allegations, calling the January 6 hearings a distraction meant to cover up Biden’s failures as president.

“The hearings are a total circus meant to distract from Biden’s failures,” Dave Abrams, a spokesman for the DeSantis re-election campaign told The Epoch Times via email.

“Quoting unnamed sources to detail the Governor’s thinking when he has clearly stated that this is a farce is a predictable tactic from Politico and the corporate media,” he added.

One campaign at a time

One fight may be enough for DeSantis to handle right now.

The GOP governor is seeking reelection for Florida’s top spot against presumed Democrat nominee Charlie Crist, who has a commanding lead against his primary opponents.

Crist has the advantage of having been Florida’s governor before, but that may be a double-edged sword for the Republican-turned-Democrat, say some.

Crist has avowed and disavowed so many political positions that PolitiFact keeps a running tally of his various flip-flops.

For DeSantis, who, much like Trump, has been pilloried by liberals for his consistency in taking up conservative causes, could be the perfect match-up against Crist, said pollster Ellis, who noted that Crist has lost statewide in Florida as a registered Democrat, Republican, and an Independent.

At some point, every voter in the state has likely voted against Crist, added Ellis, which buttresses a national trend against the Democrats.

“Nationally, 2022 GOP primary turnout is up 20 percent to date when compared to 2018, while Democrats are down 22.5 percent,” said Ellis, who noted that the GOP outpolled Democrats in 15 of 21 primaries so far this cycle.

And that might help explain why the GOP registration totals continue to roll higher each month in Florida.