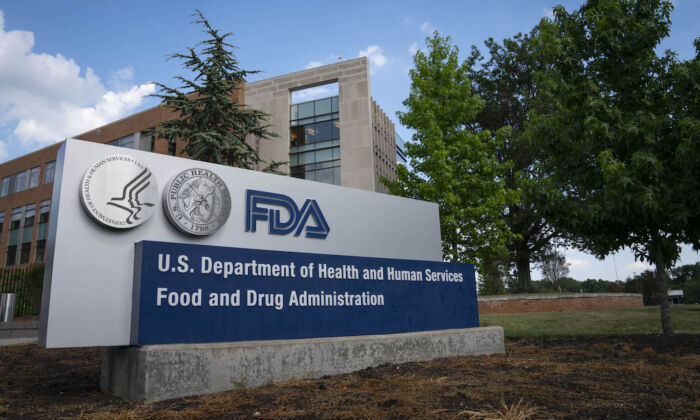 A sign for the Food And Drug Administration outside of the headquarters in White Oak, Md., on July 20, 2020. (Sarah Silbiger/Getty Images)
By Zachary Stieber

U.S. drug regulators are refusing to provide key analyses of a COVID-19 vaccine safety database, claiming that the factual findings cannot be separated by internal discussions protected by law.

According to operating procedures laid out by the agency and its partner in January 2021 and February 2022, the FDA would perform data mining “at least biweekly” to identify adverse events “reported more frequently than expected following vaccination with COVID-19 vaccines.” The agency would perform the mining on data from the Vaccine Adverse Event Reporting System (VAERS).

In a recent response, the FDA records office told The Epoch Times that it would not provide any of the analyses, even in redacted form.

The agency cited an exemption to the Freedom of Information Act that lets the government withhold inter-agency and intra-agency memorandums and letters “that would not be available by law to a party other than an agency in litigation with the agency.”

The agency also pointed to the Code of Federal Regulations, which says that “all communications within the Executive Branch of the Federal government which are in written form or which are subsequently reduced to writing may be withheld from public disclosure except that factual information which is reasonably segregable in accordance with the rule established in § 20.22 is available for public disclosure.”

It’s not clear why the FDA could not produce copies of the analyses with non-factual information redacted. The Epoch Times has appealed the determination by the records office. The FDA declined to comment, citing the appeal.

Kim Witczak, co-founder of Woodymatters, a nonprofit that advocates for a stronger FDA and drug safety system, said the agency’s refusal to provide the analyses was not acceptable.

“The secrecy is unacceptable for an agency that said it is transparent with the public about vaccine safety,” Witczak, who sits on one of the FDA’s outside advisory panels, told The Epoch Times.

“What’s the point of having VAERS if you’re not releasing it to the public?” she added.

Witczak said her concerns about vaccine safety were heightened by a recent paper from Dr. Joseph Fraiman and others that found a higher incidence of serious adverse events in vaccinated participants in the original Pfizer and Moderna vaccine trials than in placebo recipients. She noted that the FDA’s 2004 warning for antidepressants that the drugs could increase the risk of suicidal thoughts and behavior came over 10 years after the trials on which it was based.

“If this data is available, shame on you for not making it known to the public,” Witczak said. “It’s as if they don’t trust the people to make their own best decision for what’s good for them and their families.”

The Centers for Disease Control and Prevention (CDC), according to the documents outlining operating procedures, was going to perform a different type of data mining analyses, called Proportional Reporting Ratio (PRR) mining.

The CDC has also refused, so far, to provide the results for those analyses.

It has also twice provided false information when responding to questions.

The agency initially said that no PRR analyses were done and that data mining is “outside of th[e] agency’s purview.” The agency then said that it did perform PRRs, starting in February 2021.

Later, the agency acknowledged that wasn’t true. The agency did not begin performing PRRs until March 2022, a spokesperson told The Epoch Times.

The Epoch Times has submitted Freedom of Information Act requests for internal emails that may provide answers.

The Empirical Bayesian (EB) is focused on identifying disproportional numbers of adverse events, CDC scientist Dr. Tom Shimabukuro said in January 2021. It identifies “with a high degree of confidence, adverse event-vaccine pairs reported at least twice as frequently as expected for a COVID-19 vaccine compared to the VAERS database,” he said, or a comparison between the incidence of a specific event such as kidney disease after COVID-19 vaccine compared to the incidence of the same event after all other U.S.-licensed vaccines.

The FDA and CDC have provided periodic updates on the EB data mining effort.

“Importantly, there were no Empirical Bayesian data mining alerts detected for any adverse event COVID-19 vaccine pairs as of the last data mining run that the FDA performed on February 18th,” Shimabukuro told members of the FDA’s vaccine advisory panel on Feb. 26, 2021.

In a review memorandum (pdf) for an expansion of the emergency authorization granted to Pfizer’s vaccine, FDA researchers said that data through April 16, 2021, showed only a possible signal for body temperature.

In the journal Vaccine in June 2021, FDA researchers said an analysis of cases of blood clotting after the Pfizer and Moderna vaccines did not suggest a safety concern. The FDA and CDC paused the Johnson & Johnson vaccine in April 2021 over cases of blood clotting, some fatal, but lifted the pause just 10 days afterward. The FDA later restricted use of the Johnson & Johnson shot.

In a paper in the CDC’s quasi-journal in August 2021, FDA and CDC researchers said that the FDA used EB mining to monitor events in children aged 12 to 17 after vaccination. The results indicated a lack of a safety signal for post-vaccination heart inflammation, or myocarditis, though other surveillance systems had detected the issue as an adverse event.

In a preprint study in October 2021 later published in The Lancet, government scientists said no adverse health outcomes were identified with the EB mining.

And in a preprint in May 2022, scientists, including Su, said that EB mining analyzing data through Nov. 12, 2021, revealed only one signal for VAERS death reports, for “vaccination failure” after receipt of the AstraZeneca vaccine, which is not authorized in the United States.