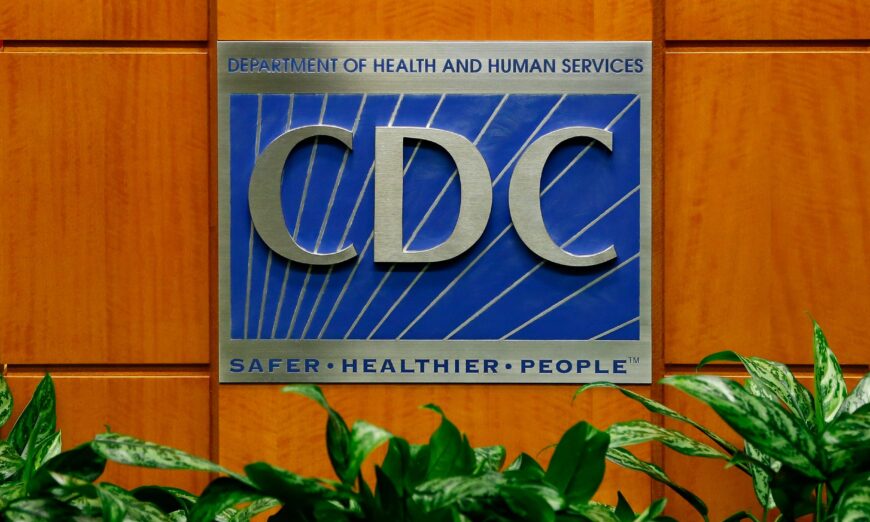 A podium with the logo for the Centers for Disease Control and Prevention in Atlanta, Ga., in a file photograph. (Kevin C. Cox/Getty Images)

The U.S. Centers for Disease Control and Prevention (CDC) will not release its review of post-COVID-19-vaccination heart inflammation.

The CDC has been performing abstractions on reports of post-vaccination myocarditis, a form of heart inflammation, submitted to the Vaccine Adverse Event Reporting System.

But the agency is saying that federal law prevents it from releasing the results.

The abstractions “are considered medical records which are withheld in full from disclosure,” the CDC told The Epoch Times in a recent letter, responding to a Freedom of Information Act request.

One of the exemptions in the act says that agencies can withhold materials that are “specifically exempted from disclosure by statute, if that statute (i) requires that the matters be withheld from the public in such a manner as to leave no discretion on the issue; or (ii) establishes particular criteria for withholding or refers to particular types of matters to be withheld; and (B) if enacted after the date of enactment of the OPEN FOIA Act of 2009, specifically cites to this paragraph.”

The CDC pointed to the Public Health Service Act, which was enacted in 1944, and says that vaccine injury reports and other information that may identify a person shall not be made available to any person except the person who received the vaccine or a legal representative for that person.

The information sought is available through the CDC website without details that would identify patients, the agency also said.

The CDC said that it does not have a formal definition of “abstraction” but that it means the process of reviewing medical records, including autopsy reports and death certificates, and recording data in a database. “Please note that this definition means that any abstracted data, because they originate from medical records, is also considered medical records,” a CDC records officer told The Epoch Times in an email.

Refusing to release the data raises concerns about transparency, according to Barbara Loe Fisher, co-founder and president of the National Vaccine Information Center.

“The stubborn refusal of officials heading up federal health agencies responsible for protecting the public health to come clean with Americans about what they know about COVID vaccine risks is stunning,” Fisher told The Epoch Times in an email.

Fisher noted that the CDC has funded electronic medical record systems that collect personal health information and that the agency shares the data with a number of third parties, such as contractors and researchers.

“Yet, CDC officials are claiming they cannot release de-identified abstraction information curated from the medical records of individuals, who have suffered myocarditis or died after COVID shots? This looks and feels like a coverup of the true risks of COVID vaccines,” Fisher said.

Fisher called for a congressional probe into what she described as “the disturbing lack of transparency on the part of federal agency officials, who granted COVID vaccine manufacturers an Emergency Use Authorization (EUA) to widely distribute the vaccines in December 2020 and have recommended and aggressively promoted the vaccines for mandated use ever since.”

In response to a separate Freedom of Information Act request, the CDC initially said that it did not perform any abstractions or produce any reports on post-vaccination myocarditis. That request was for reports between April 2, 2021, and Oct. 2, 2021.

The agency also falsely said that a link between myocarditis and the messenger RNA COVID-19 vaccines was not known during that time.

A possible link between those vaccines, made by Pfizer and Moderna, became known in early 2021. Many experts now acknowledge the link is likely or definitely causal.

The CDC later issued a correction on the false claim, as well as the claim that the agency started performing a type of data mining on VAERS data as early as February 2021.

The CDC said in its correction that myocarditis abstractions began being performed in May 2021.

Notified that its response was false and asked to do a fresh search, the records office did not respond.

Appeals have been lodged in that case and after the more recent response withholding the records.

Dr. Rochelle Walensky, the CDC’s director, said in a press conference in April 2021 that the agency had not detected a link between the vaccines and myocarditis. The basis for that statement remains unclear.

The refusal to provide the myocarditis abstractions is part of a pattern with the CDC and its partner, the Food and Drug Administration (FDA).

The CDC still hasn’t released the results of the data mining, to The Epoch Times, Sen. Ron Johnson (R-Wis.), or a nonprofit called Children’s Health Defense. The agency also declined to provide results from a different monitoring system, V-safe, to a nonprofit called Informed Consent Action Network, which then sued the agency and just recently received the first tranche of data.

The FDA, meanwhile, has refused to release the results of a different type of analysis on the VAERS data, claiming it cannot separate the results from protected internal communications. The agency is also withholding autopsies conducted on people who died after getting COVID-19 vaccines, pointing to exceptions laid out in the Freedom of Information Act.

Along with Johnson, several other lawmakers are pressing at least one of the agencies to release the data, asserting that not doing so is illegal.