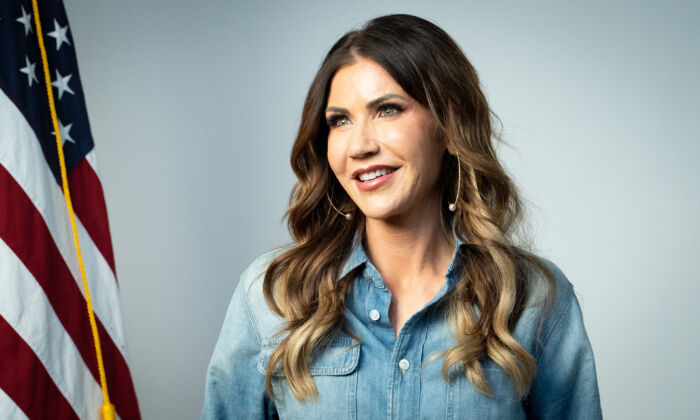 South Dakota Gov. Kristi Noem says that her respect and adherence to the Founding Fathers’ vision for America, outlined in its guiding documents, has been a strong thread running throughout her early life—as well as in her role now as a state governor.

Growing up on a farm in South Dakota helped. Noem truly appreciates the value of responsibility and freedom, she told EpochTV’s “American Thought Leaders” during a recent interview about her new book, “Not My First Rodeo: Lessons from the Heartland,” in which she explains her influences.

Her respect for the U.S. Constitution and her upbringing on the land also contributed to her being the only governor who didn’t follow the federal government’s lockdown policies when COVID-19 arrived on U.S. soil.

Instead, Noem decided to allow South Dakotans to decide how to best protect themselves and their families, allowing businesses and schools to remain open throughout the COVID-19 pandemic.

“So for me, the one thing that’s consistent, that’s protected this country for hundreds of years, is literally the framework that our Founders gave us, and you can’t go wrong as long as you start with a good foundation,” she said.

“It’ll keep you even during the shakiest time. So many, many times throughout the last several years as governor, that was my guiding light, to come back to our state Constitution, our U.S. Constitution, to really understand what my role was as governor.”

As governor, Noem said she only wanted to implement laws that were allowed by her state and U.S. Constitutions and nothing more. By taking this approach, Noem withstood negative publicity and accusations of being “anti-science.”

“It was a pretty lonely job for a period of time because, while I was making the decision not to shut anything down—not even define what an ‘essential business’ was in my state because I didn’t believe that governments had the ability to tell you your business wasn’t essential—I was getting criticism not just from Democrats,” she said, noting that other Republicans and also her supporters were warning her that she would ruin herself politically.

“At the end of the day, I wanted to make sure that I could look back years from now and be proud of the fact that I did my job and only my job [within the authority that I had]. I’m just a big believer that if leaders do overstep their authority, especially in a time of crisis, that’s when we break this country. And I didn’t want to be that person.”

So instead of following the crowd, she listened to her health experts, constitutional attorneys, and her constituents when making decisions in response to the pandemic.

Noem also said her father, a cowboy who taught her the value of hard work, was her role model and that, instead of complaining, you find solutions.

“We never talked about politics at all; nobody in my family is involved in government or the political arena. We lived our politics,” she said.

Working hard with the team on the family farm gave her the foundation to make hard decisions as a governor, Noem said.

“We tackle a problem, figure it out, and it builds your confidence to take on the next biggest one that comes your way.”

Many would agree with her that South Dakota has reaped the benefits of her independent decisions during the initial two years of the pandemic.

“The state’s doing fantastic,” Noem said, citing that the unemployment rate in her state is very low, the economy is thriving, students are excelling, and that tourism and the number of people moving to South Dakota have increased.

“It’s really a testimony to doing what conservative people believe in.”

Family and faith are paramount for Noem, and her husband plays an important role in supporting her as South Dakota’s governor.

“So most of the time, he is the balance to me; he’s the one that slows me down and puts a lot of thought and prayer into every decision that we make,” she said.

“He is more willing to really look at the long-reaching effects of the decisions that I make. Because for me, my tendency is just to say yes. Somebody asked me to do something. I’ll say, ‘Yeah, absolutely.’ And if they give me three options, according to him, I always pick the hardest one.”

Noem has seen that choosing the hard path is most often the best for her state, but also more demanding for her family. Yet, she has a desire to do more for her state and serve God, she added.

“Which is a very difficult thing to be married to, I think, because my husband thinks I’m very busy already,” she said. “He sees me working 20 hours a day and says, ‘How could you possibly do more?’”

Noem has received backlash for opposing transgender athletes competing in girls’ and women’s sports. She vetoed “flawed” legislation that would have allowed transgender biological males to compete with biological females, which she thinks is unfair and infringes on women’s basic rights.

She asked the legislators to fix the measure but they refused, so she took a different route to ensure fairness in women’s sports.

“So instead, when the legislature did not accept my changes, I did executive orders to protect our sports until I could run a bill this year. This year, we ran the strongest bill in the nation that will withstand any court challenge, and I signed it into law,” Noem said.

Even before becoming governor, she felt passionate about preventing biological males from competing in women’s rodeo. At that time, none of her colleagues wanted to be targeted for seeming to be oppressive toward transgender people and refused to oppose the initiatives, she said.

“But I pushed. It eventually got the federal government to back off and to this day in South Dakota, we still are allowed to have girl’s events and boy’s events in the sport of rodeo,” Noem said.

Keeping Federal Government in Its Place

Another issue that Noem feels strongly about is abortion. She told American Thought Leaders that she’s grateful that South Dakota has banned abortions except in the case to save a mother’s life.

She said she believes the Supreme Court made the correct decision in overturning Roe v. Wade, because according to a more accurate reading of the U.S. Constitution, the federal government shouldn’t be the one to set abortion laws.

“So now, the decision of abortion and if it’s legal or not will be made at the state level, where elected officials can hear from the people closer to home. And that’s the way that I think is proper and defined by our Constitution,” Noem said.

In her state, she wants to ensure that women experiencing a crisis pregnancy have their financial, emotional, and health care needs met.

“That’s something I think we can all do better in this country, is really letting them [would-be-mothers] know that there are other options that aren’t necessarily going to create a crisis and upturn their life,” she said.

Pro-life advocates need to also educate the public on the true science and toll of abortion, according to Noem.

She disagrees with many of the Biden administration’s decisions because she sees them as government overreach and unconstitutional, as in the case of the White House not allowing South Dakota’s annual firework displays on July 4. She’s suing them for denying the permit.

“It would be because the federal government and the president are denying us this fireworks celebration and breaking federal law when he does it,” she said of the lawsuit. “He’s not following the law … a federal statute that’s called the Administrative Procedures Act.”

The Mount Rushmore fireworks are very important to her state because the event helps drum up tourism and showcases a part of South Dakota that’s significant to U.S. history.

“But also, it’s a great chance to celebrate America. So, unfortunately, with this administration, I end up suing them quite often,” she said.

Noem said she’s hopeful that the traditional version of America—the patriotism and freedom-loving peoples—still exists because currently, more people are said to be choosing vacations in U.S. small towns over overseas tropical destinations.

“It’s remarkable. It’s amazing to me, because I think it reminds them of what this country is, in our beginnings and the American West, and it’s hopeful and optimistic,” she said.

Of her new book, Noem said, “I hope you get a glimpse of a little bit of the story of South Dakota and how I hope that this country can return to that.”

She said of South Dakota under her leadership values, “We believe in rule of law, upholding our law enforcement officers, respecting them, taking care of our neighbors, cooperating together. And our economy’s thriving, families are successful, parents are parents, and kids are doing great. So, I think it is inspirational for the kind of community, state, and country that people want to live in today.”