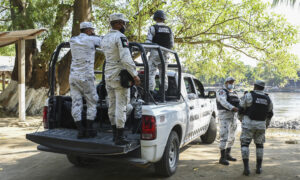 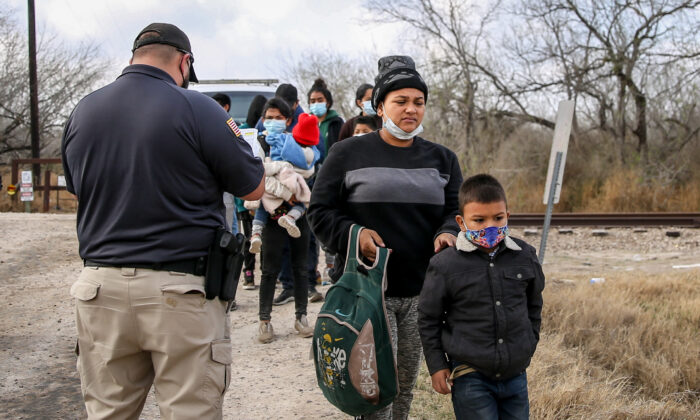 The family-unit holding cells smell like urine and vomit. Fights break out in the unaccompanied-minor cells. Scabies, lice, the flu, and COVID-19 run rampant.

Up to 80 individuals are squeezed into each 24- by 30-foot cell, and there aren’t enough mattresses for everyone. Sheets of plastic divide the rooms.

“Any diseases that are in there, it’s being kept in there, like a petri dish. The smell is overwhelming,” a Border Patrol agent said, describing the conditions in a facility in south Texas. The agent, Carlos (not his real name), spoke to The Epoch Times on condition of anonymity, for fear of repercussions.

Border Patrol agents on the front lines are getting so frustrated that they’re now risking their livelihoods to reveal what’s really going on in the illegal immigrant processing facilities.

One or two agents are left to control 300 to 500 people during a shift. No agent wants to report physical or sexual assaults between the aliens because they’ll get blamed for “letting it happen.” They’re also forced to separate a child from an extended family member because he or she is not a biological parent.

The number of unaccompanied minors—children under 18 who arrive without a parent—is buckling the system. The law requires Border Patrol to prioritize unaccompanied minors and transfer them to the Department of Health and Human Services within 72 hours.

“We’re getting them out of here as quickly as possible, but we are so overwhelmed right now,” Carlos said. “It used to be easy to get them out in 72 hours. Not anymore. They’re staying here for 10, 12 days. It’s horrible.”

So far this fiscal year (from Oct. 1, 2020), Border Patrol has apprehended more than 29,000 unaccompanied children crossing the border illegally. In all of fiscal 2020, just over 33,000 were apprehended, according to Customs and Border Protection (CBP) statistics.

This year’s numbers are on a trajectory to surpass the 2019 crisis numbers, when 80,634 minors were apprehended.

CBP declined to provide the number of unaccompanied minors currently being held. “In general, CBP does not provide daily in-custody numbers, as they are considered operationally sensitive because CBP’s in-custody numbers fluctuate on a constant basis,” CBP spokesman Nate Peeters wrote in an email to The Epoch Times on March 23.

Health and Human Services confirmed on March 23 that its Office of Refugee Resettlement is holding approximately 11,350 children.

CBP and Health and Human Services have opened several extra facilities to deal with the influx, with the latest being the San Diego Convention Center.

Carlos confirmed that the majority of unaccompanied minors coming across the border already have parents or family members in the United States.

“Everybody that shows up here—even if it’s a 3-year-old kid with no one around—they all have an address on them. And they’ll give it to you: ‘Here’s my address; this is where you are sending me,'” Carlos said.

“And that’s what we do. This is the way we are being played.”

Most of the unaccompanied minors come from the Central American countries of Honduras, Guatemala, and El Salvador.

Two-thirds of migrants traveling through Mexico report experiencing violence during the journey, including abduction, theft, extortion, torture, and rape, according to Doctors Without Borders (MSF), which has been providing medical and mental health care for migrants and refugees in Mexico since 2012.

A new directive from the Biden administration is allowing for family units to be released into the interior of the United States without a notice to appear—the paperwork that states the date an illegal immigrant must turn up in court to plead their case.

“There’s no repercussions. I’m not even going to give you a court date. You don’t even have to show up at court if you don’t want to. It’d be nice, but you don’t have to. That word gets out immediately. And I mean overnight,” Carlos said.

He said it’s now common knowledge that if you bring a child, you’ll be quickly released into the United States. They’re being transported all over the country, but popular destinations include Houston, New York, and California, as well as Maryland and Washington, D.C.

“They’ll put them in a hotel for a couple of days until their flight is ready to fly them to where they are going. That’s tax dollars,” Carlos said.

“There’s no end in sight. The people that we’re apprehending are warning us of the larger caravans that are on their way.”

He said President Joe Biden’s rollback of the Trump administration’s border policies is the direct cause of the surge.

“One hundred and ten percent. They were already ready before Biden was even in office. They knew that the doors were going to be open. And now we’ve got a point where we cannot stop it,” he said.

The administration hasn’t allowed media to access the processing facilities and, according to agents, it’s even requiring that agents in the field move illegal aliens they apprehend onto private land to process them.

“Keep trying until you find us on a public road. But we’ve been instructed to move all the traffic onto ranches to make sure there’s no public eye,” an agent said.

“Biden’s strict on that. Trump was a different story. This administration is a no-go on media, I’m guessing because they don’t want to let the word out on what’s going on here on the border—to make him look good.”

Carlos said the agency has stopped dropping illegal immigrants off directly at bus stations now. “We were given strict orders from Washington, D.C., that that ceases—it’s drawing too much attention,” he said.

Now they drop the illegal immigrants nearby or at a local NGO facility near the bus station, he said.

The administration hasn’t yet called the current situation a crisis, and Biden said on March 21 that he’ll visit the border “at some point.”

‘Our Defenses Are Down’

During the Trump era, agents felt “empowered” to do their jobs, he said. “Whatever deals he made, everything was working just fine. Now we’ve got this trash.”

As agents get moved to deal with the increase in family units and unaccompanied minors, the smuggling organizations and cartels move drugs and other individuals through other, unpatrolled areas.

“Our manpower is being depleted because we need to go babysit these people, move them as fast as possible to release them into the country,” Carlos said. “It’s ridiculous. We have no backup. We’re losing more than we’re catching. And it’s no secret.

“Our defenses are down. So if there’s anybody that we should be worried about, they know this is the time to come in. They know it.”