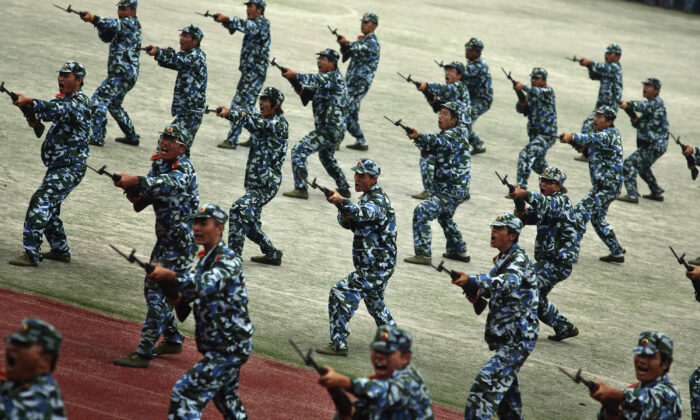 EXCLUSIVE: 40 Percent of Americans Believe CCP Considers Itself at War With US: Poll

An increasing number of Americans believe that China’s communist regime considers itself to be at war with the United States, according to the results of a new national survey shared exclusively with The Epoch Times ahead of its public release on Sept. 12.

The survey, conducted by nonprofit Convention of States Action and polling company Trafalgar Group from Sept. 2 to Sept. 5, polled more than 1,000 likely midterm voters across the political spectrum. The poll had a margin of error of 2.9 percentage points.

Notably, the polling also revealed a stark partisan divide in opinion about the seriousness of the CCP threat.

Slightly less than 60 percent of Republicans believed that the CCP considers itself to be at war with the United States, while less than 24 percent of Democrats said the same.

Regardless of affiliation, however, more Americans were unsure of the veracity of the claim than were confident that it’s untrue.

Regarding the U.S. response to the perceived threat, 67 percent of all respondents said they don’t believe the U.S. government considers itself to be at war with China.

In all, less than 9 percent believed that the United States considers itself to be at war with China, although Democrats were more than twice as likely to believe such a thing as Republicans.

“These are stunning results,” Mark Meckler, president of the Convention of States Action, said in a statement to The Epoch Times. “Americans clearly see that the Chinese Communist Party considers itself at war with the United States, and yet they acknowledge that the U.S. government doesn’t appear to have a clue this is the case.”

Congressional Republicans have long lambasted the Biden administration for a perceived failure to adequately respond to CCP aggression. The results of the survey appear to suggest that many Americans are at least sympathetic to the view that U.S. leadership isn’t meeting the regime’s provocations in kind.

Over the past decade, the CCP has led a widespread effort to undermine U.S. institutions. That campaign has included a plot to attack a U.S. Army veteran running for office, the arson of sculptures critical of the regime, and the stalking and intimidation of a U.S. Olympian whose father had spoken out against the regime.

The CCP also has conducted mass espionage in the United States, stealing technology, research, and intellectual property in order to supercharge its economic and military development.

Some experts believe that the CCP is at war with the United States because of the regime’s doctrine of “unrestricted warfare,” through which it aims to achieve military objectives through the use of law, psychology, and economic coercion. As such, the regime’s rampant espionage campaigns might be considered part of the regime’s wider effort to undermine and replace the liberal international system with a more China-friendly system.

“This is not a left-right issue; it’s not a Republican-Democrat issue,” Meckler said. “It’s a survival issue for America and the free world.”