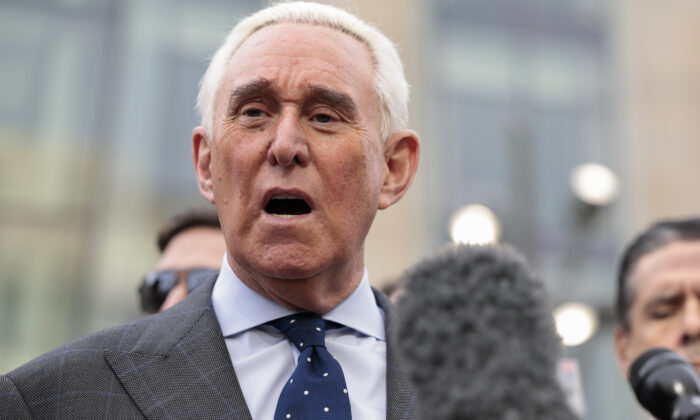 Roger Stone, a longtime ally of Donald Trump, says he found it “a little perplexing” that the former president’s executive grant of clemency for him topped the list of Mar-a-Lago materials that were seized by FBI agents.

The clemency letter that Trump issued in December 2020 was among about 20 boxes of items the agents removed during a raid of Trump’s Florida residence on Aug. 8, along with documents marked as classified, top secret, and confidential, although Trump said that the documents were “all declassified.”

In an interview with The Epoch Times shortly after the FBI search warrant was unsealed, the political lobbyist wondered why the clemency letter became a focus of the federal agency’s attention.

“Why these documents are being struggled over between the president and the National Archives, I have no idea other than to say everything was done perfectly legally,” said Stone.

Trump issued the pardon in December 2020 as his term as the 45th U.S. president was nearing its end, saying that the then-68-year-old Stone had “numerous medical conditions” and had been “treated very unfairly” due to “prosecutorial misconduct.”  ​

Stone, who served briefly as a Trump campaign adviser in 2015, was arrested in January 2019 in connection with special counsel Robert Mueller’s investigation into whether the Trump campaign had colluded with Russia in influencing the 2016 presidential election.

Mueller’s report in April 2019 stated there was no evidence that Trump or his associates had knowingly conspired with Russia.

Stone acknowledged that he had made misstatements to Congress under oath, but maintained that they were “all innocuous” and “immaterial.”

“One cannot lie to Congress about Russian collusion, if no Russian collusion took place, can they? So I was framed solely for the purpose of pressuring me into giving false testimony against the president,” Stone told The Epoch Times.

According to Stone, in July that year, prosecutors told his attorneys that if he agreed to testify falsely against the president regarding some 26 phone conversations they had during the 2016 presidential campaign, they would argue for his leniency with the judge, an offer he said he refused. Trump commuted Stone’s sentence that same month, a day before he was due to begin serving a term of three years and four months in connection to the Russian interference probe.

He speculated that the FBI agents may be looking into the records indicating “a corrupt bargain or some impropriety,” which he insisted was “not true.”

“So any insinuation that there’s something improper about the clemency in my case, that would be categorically false.”

Stone had a taste of an FBI raid himself on the day of his arrest in 2019.

At 6 a.m. that day, 29 FBI agents swarmed his residence in Fort Lauderdale, Florida, with 17 armored vehicles, a government helicopter overhead, and two amphibious units. The agents were there for 13 hours, he recalled.

As with how the agents went through former First Lady Melania Trump’s wardrobe, Stone said they also searched all of the personal items and clothing of his wife.

He stressed that nothing from the raid on his home, office, and Manhattan apartment was used against him at trial.

“So it’s about intimidation,” he said. “The whole purpose of this is to intimidate the former president, which, having known him for 42 years, Donald Trump cannot be intimidated.

“If anything, they have galvanized his resolve to run again.”

He sees the raid as “the latest in a series to disqualify Trump” from running for president in 2024, following the two impeachment attempts while Trump was in office and the ongoing Jan. 6 committee probe.

One federal code listed in the search warrant concerns the willful and unlawful concealment, removal, or mutilation of public records, which could cause the individual to “forfeit his office and be disqualified from holding any office under the United States.”

But a hypothetical conviction under the statute still isn’t a legal basis barring the former president from seeking a second term, some legal experts have argued, as the statute can’t override or supersede qualifications for the presidency as set out in the Constitution—minimum age of 35, and being a natural-born citizen who has lived in the country for at least 14 years.

It’s a signal that Trump’s opponents are “desperate” for legal ways to thwart his presidential ambitions, Stone suggests.

“They must not feel that they have any kind of viable case against the president regarding Jan. 6, and therefore they’re using this new rubric as an excuse to try to eliminate him as a candidate in 2024.”

Stone said his time going through the political prosecution has revealed to him a “two-tiered justice system,” contrasting what he saw as a differential treatment between those on the Democratic camp, such as Hunter Biden, the son of President Joe Biden who had engaged in foreign ventures while his father was holding a public office, and the handling of those on the Republican side.

“If you’re a liberal Democrat, you have nothing to fear from the FBI or the justice system. If you’re a supporter of Donald Trump, if you’re a Republican, well then you’re a target.”

The FBI declined to comment. Department of Justice officials didn’t respond by press time to a request by The Epoch Times for comment about Stone’s statements.