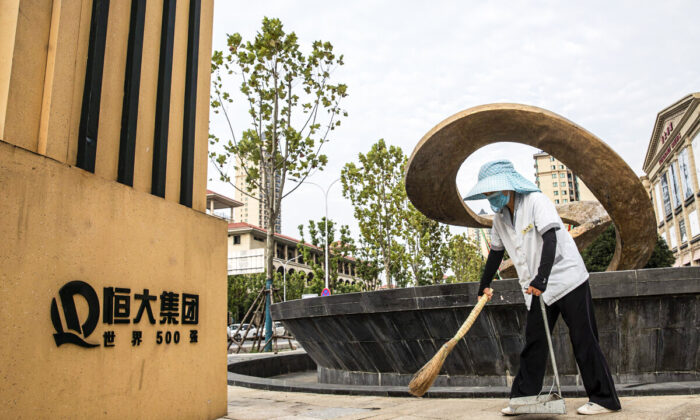 A cleaner sweeps in Evergrande City on Sept. 24, 2021, in Wuhan, Hubei Province, China. Evergrande, China's largest property developer, is facing a liquidity crisis with total debts of around $300 billion. The problems faced by the company could impact China’s economy, and the global economy at large.（Getty Images)
China Business & Economy

Evergrande Crisis Could Be a Canary in the Coal Mine

As Chinese real estate behemoth Evergrande, saddled with $300 billion in liabilities, dances ever closer to default, questions about the health of the broader domestic property market have taken on greater urgency.

Recent data have confirmed that Evergrande’s debt crisis has sent jitters through China’s property market. Home sales plummeted about 17 percent for the year to September, following last month’s 19.7 percent fall, according to recent data by China’s National Bureau of Statistics.

“No one is buying new properties because they are getting afraid,” Helen Qiao, chief Greater China economist at Bank of America, told Bloomberg Television on Oct. 17.

The slide in the property market is clearly having a broader effect on the economy. Recent data show that China’s third-quarter economic growth came in lower than expected at 4.9 percent, following a 7.9 percent increase in the second quarter.

“[The] data reconfirmed our view that the property slowdown is one of the main drivers of the current China economic slowdown, on the back of financial tightening and property tightening,” Mo Ji, chief China economist at Fidelity International, told The Wall Street Journal on Oct. 18.

Along with the slide in the property market, China is facing various economic headwinds. An energy crisis and global supply chain disruptions are stunting manufacturing output, while pandemic-related uncertainty has left consumers reluctant to spend.

It’s becoming increasingly clear that the forces that have driven Evergrande to the brink of default are also putting stress on other Chinese property developers in China.

Fantasia Holdings Group, a mid-sized luxury property developer, surprised markets earlier this month when it announced that it missed a $206 million bond payment. The news came only a few weeks after Fantasia announced that it had “sufficient working capital and no liquidity issues.”

Though individually these property developers pose little systemic risk to China’s financial system, the pattern has propelled fears of contagion spreading across the property sector in China. U.S. markets have already turned on U.S. dollar Chinese junk bonds, with yields reaching a staggering 20 percent. This only tightens the bind faced by Chinese property developers by making it harder for them to roll over their debt.

At the moment, Chinese authorities say they believe Evergrande’s debt issues are “controllable.” However, steps are already being taken to slow the downward slide in the property market and prevent any widespread contagion.

According to Bloomberg, China’s financial regulators have requested that banks accelerate mortgage approvals to help stem the decline in property sales. A ban on selling residential mortgage-backed securities also has been lifted, which should ease lending constraints faced by banks.

However, Raymond Cheng, head of China and Hong Kong research at CGS-CIMB Securities, told Bloomberg that these moves are unlikely to resolve the liquidity problems faced by property developers. Rather, regulators should ease financing constraints for project loans and onshore corporate bond markets.

More broadly, these moves represent a reversal in policy for authorities. In recent years, officials have attempted to wean the economy off the property market—and the leverage that comes with it—as an engine of economic growth.

As the economy faces immediate headwinds from the property market, the energy crisis, global supply chain disruptions, and pandemic-related consumer uncertainty (not to mention the longer-term demographic hurdles), it remains to be seen whether China’s economy can grow without debt-fueled property growth.